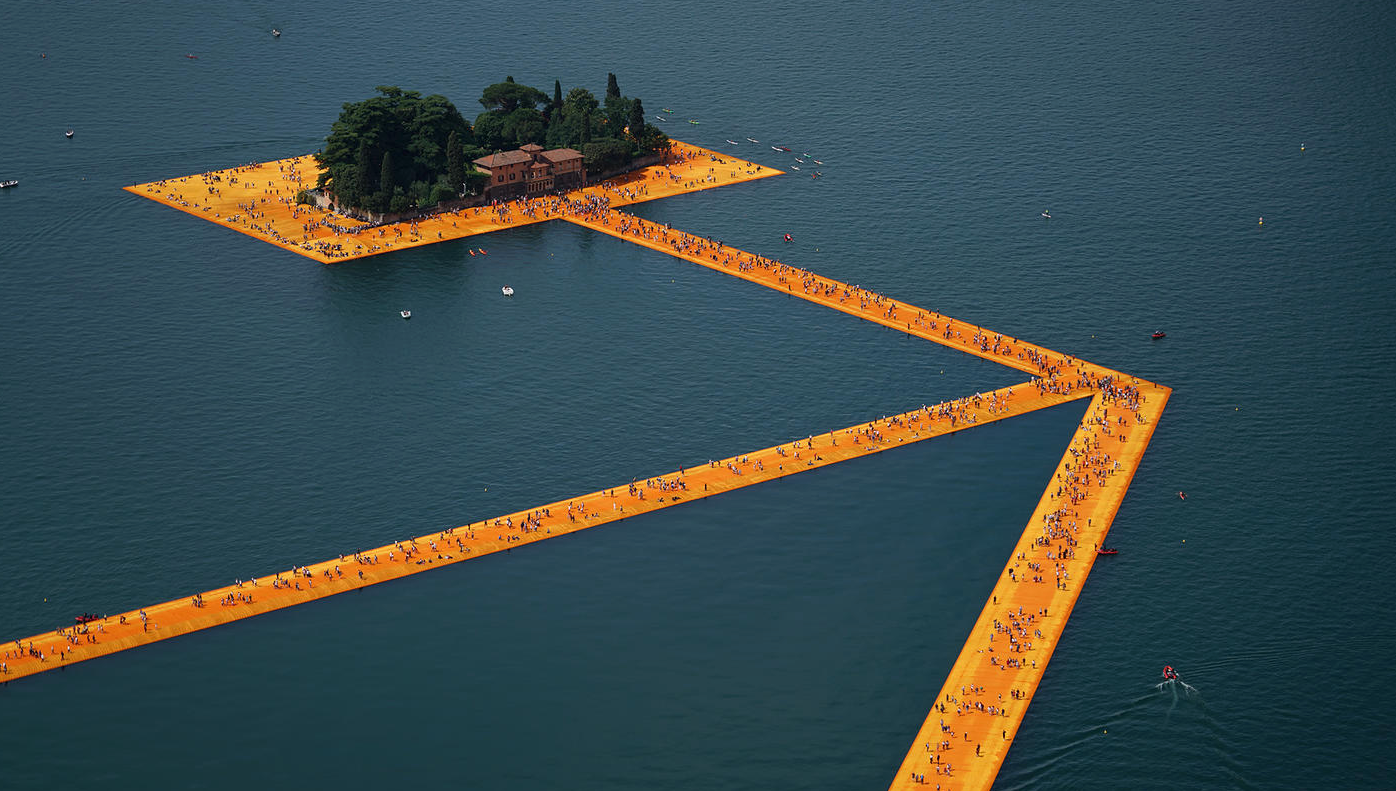 Over the weekend, my social media feeds were draped in neon orange as the world exuberantly shared the first photos of Christo's latest work, The Floating Piers, a 3km walkway across an Italian lake. It is easily the artist's most ambitious piece from an engineering perspective — and one that actually adds value to its location. Orange carpet. (Image: Wolfgang Voll © 2016 Christo)

For a little over two weeks, visitors will be able to walk from the town of Sulzano to two tiny islands using a temporary pier made from 200,000 cubes of high-density polyethylene. The 16m-wide fabric-covered path is tethered to the lake bed but has no guardrail — it's just your feet, the water and a gently undulating quilted footpath.

Christo — who is perhaps best known for the fancy drapes he installed in Central Park, in the same shade of orange — has executed dozens and dozens of similar projects which, until recently, were collaborations with his wife and partner Jeanne-Claude, who died in 2009. 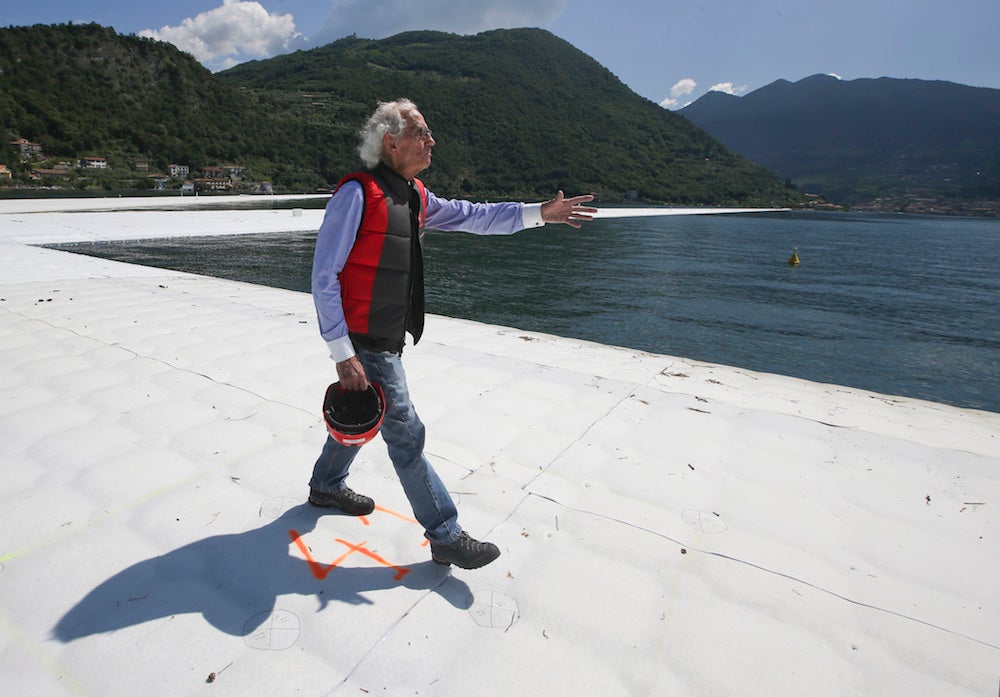 Christo walks on the lake's path before it is covered in orange fabric. (Image: AP Photo/Luca Bruno)

But in recent years, his attempts to accessorise the natural landscape have been met with criticism. A recent proposal to stretch 9.5km of fabric over the Arkansas River in Colorado was halted due to litigation from environmentalists. And, I think, rightly so. At the rate we're destroying the natural world at the moment, there isn't a very good reason to experiment with potentially harmful projects. But this sense of frivolity seems to pervade Christo's work, this notion of shrouding a delicate coastline in the marine version of a Snuggie, just because. Even Christo has admitted this: "I know these projects are totally irrational, totally useless." 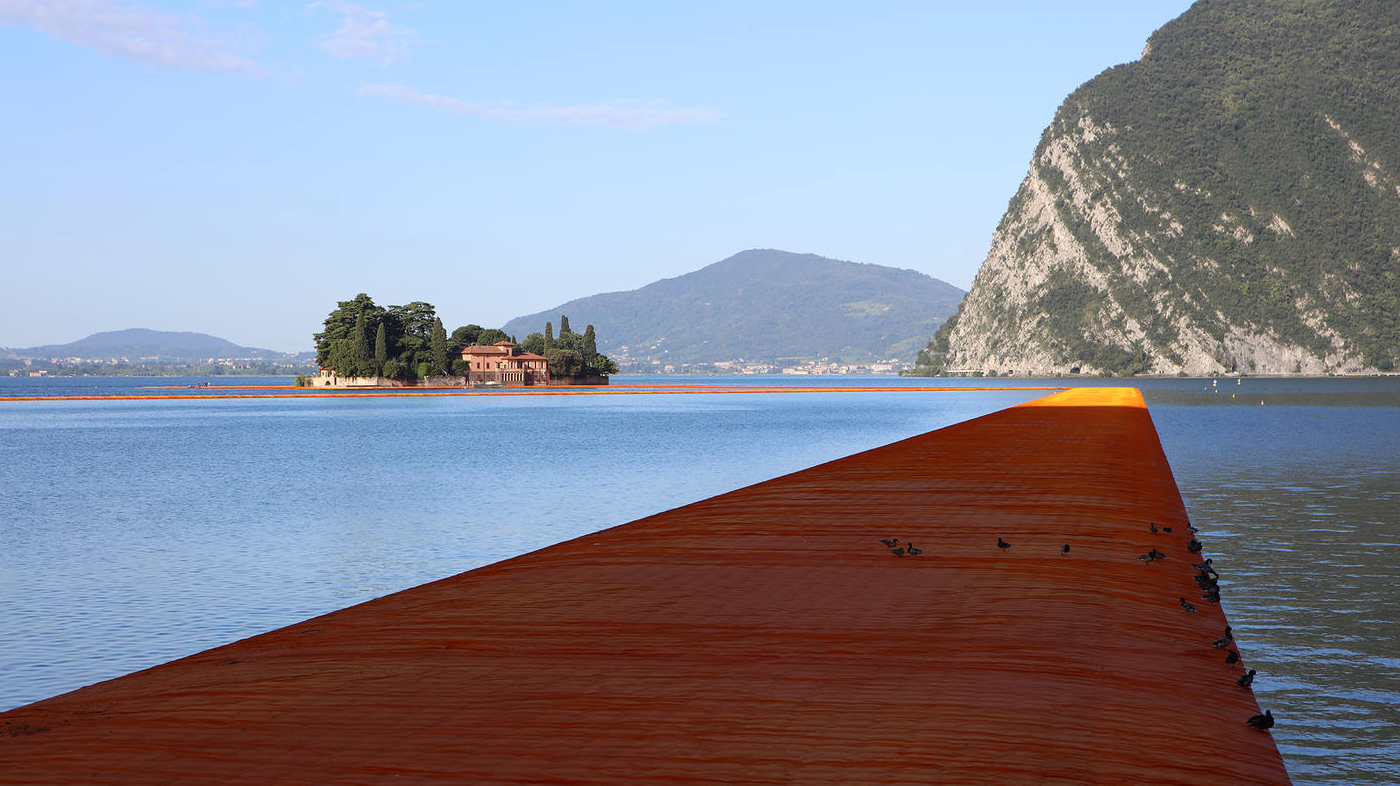 The Floating Piers is something different, though. This is not just a frilly skirt wrapped around an island which you might only admire from your private jet. This represents a major advancement in pedestrian infrastructure, and one that could very easily be adopted for our cities in a climate-changing world. This art is incredibly useful. 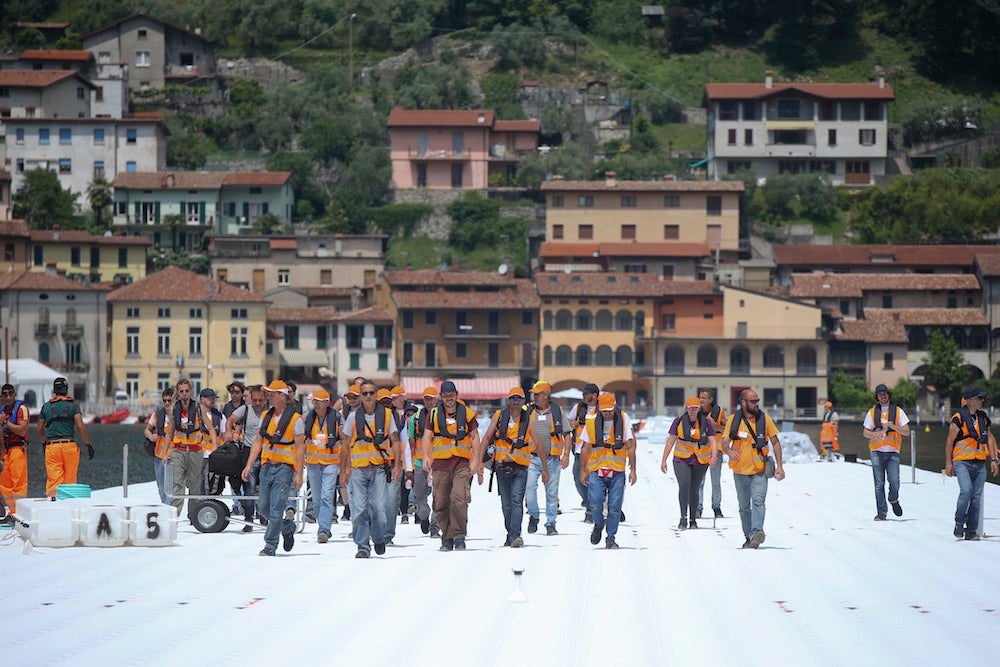 Imagine the potential of deploying this type of temporary bridge after a disaster. A pathway like this would allow a city isolated by the destruction of a bridge due to a major storm or seismic activity to be reconnected to the mainland. And it's not just a poetic solution for post-disaster times. Innovations in floating walkways, and especially ones that look good, have general importance to highly populated coastal areas as sea levels rise.

Another thing to note about The Floating Piers is that the pathways don't end at the water's edge. Instead, the orange carpet rolls through onto local streets, creating a wayfinding system that leads walkers up into the town. This could be a model for the way coastal cities integrate emergency routes for tsunamis and storm surges — and what better than this shade of traffic-cone orange to guide them? 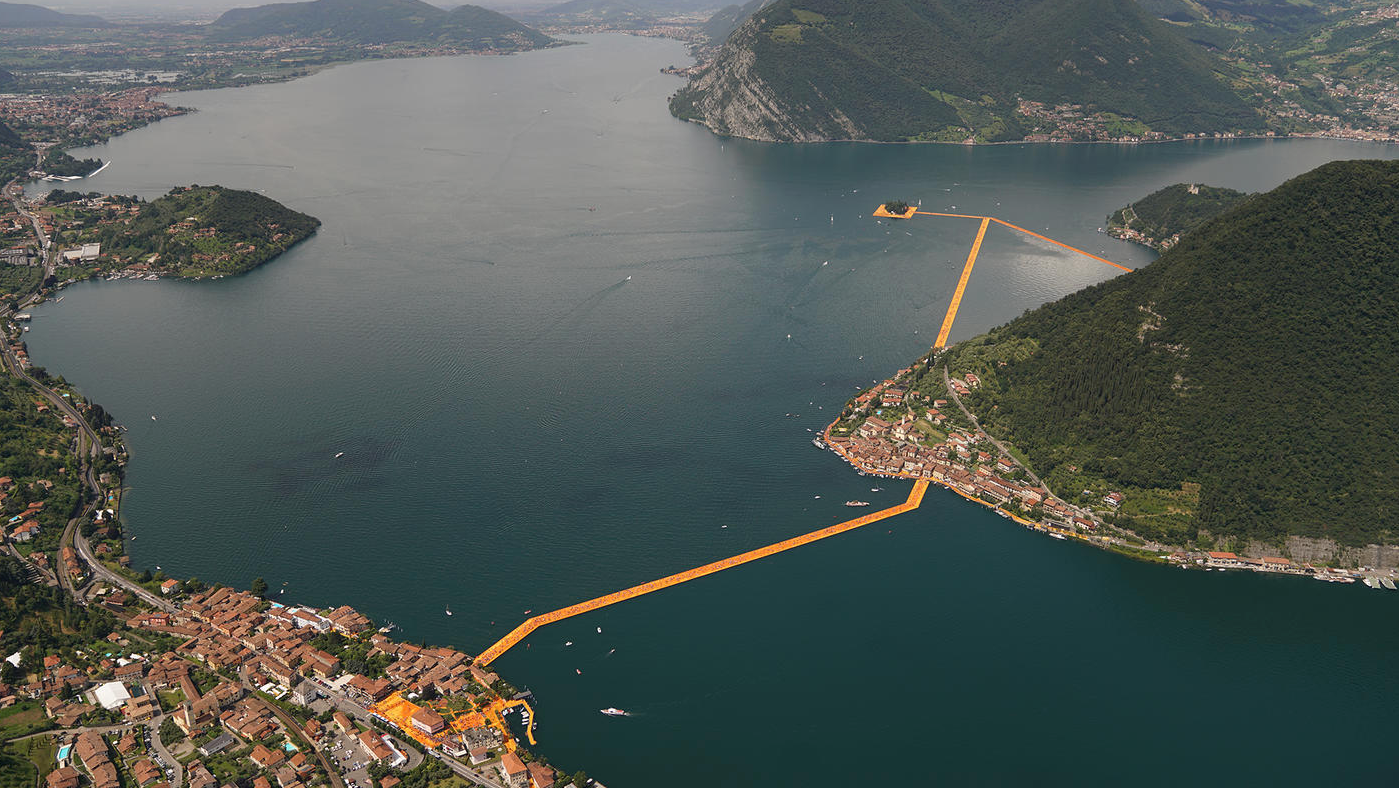 Of course, one might worry about the environmental impact that the installation itself caused to Lake Iseo — and yes, there were concerns — but Christo's engineering team has managed to execute this project with the blessing of local scientists, using a light footprint, in a relatively quick two-year timeframe. Right now the biggest problem is that so many people are coming to see the walkway, the town is almost unable to accommodate so many visitors. But the piers are holding up just fine. 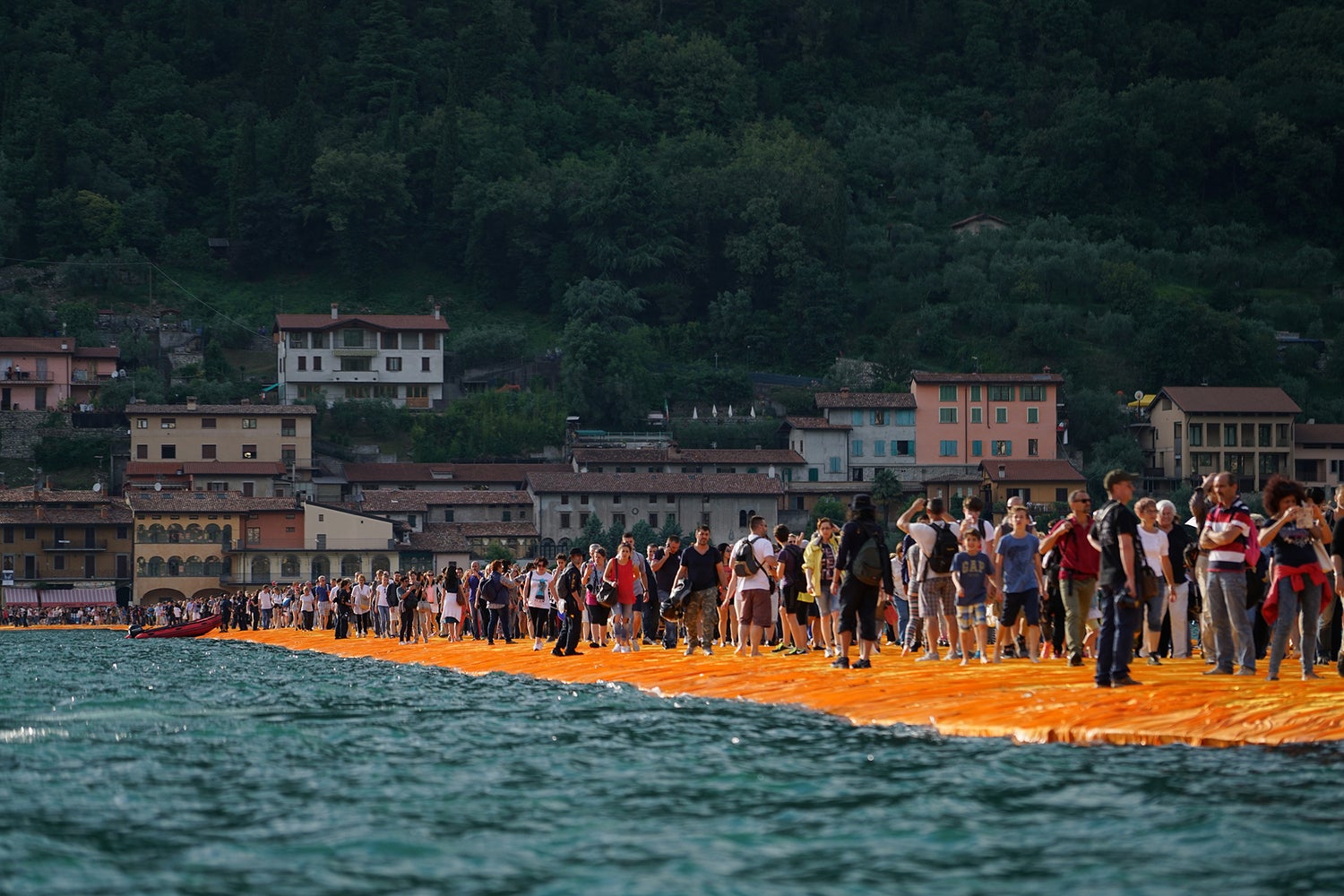 Last Friday, just before the opening of the The Floating Piers, I wrote about a balloon-like bridge that could bob in New York City's East River to help pedestrians get from Williamsburg to Manhattan when the L train shuts down. Suddenly the idea doesn't seem so crazy. Maybe New York City should hire Christo to come back, but this time with some ideas for how to solve the problems of the city instead of simply wrapping a bow around them.