The 20 Scariest Horror Movies Of The Last Decade 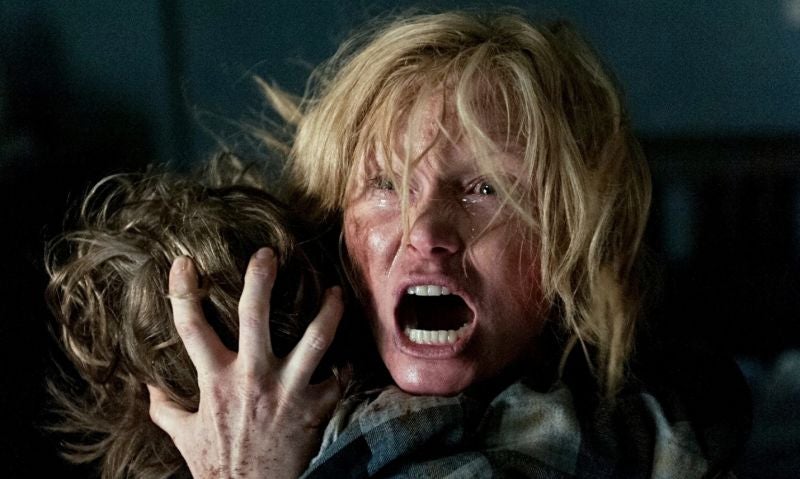 The Babadook
Since 2006, we’ve had enough horror remakes and sequels to last a century. But we’ve actually had some terrifying new entries into the genre, too. As we await the likes of Lights Out and The Woods — both rumoured to be nightmare-inducing — later this year, there’s no better time than to look back at what’s scared us the most in the past decade.

No, not the Stephenie Meyer adaptation. This Host is the 2006 South Korean film by Bong Joon-ho (Snowpiercer), in which a ne’er-do-well father must take charge when a beast emerges from the Han River and grabs his young daughter (as well as dozens of other unfortunate Seoul residents).

It’s a well-crafted monster movie with the requisite political message (the creature is shown to have been caused by the American military) and well-drawn characters. The stakes are high. The heroes are unlikely. The monster cannot be reasoned with. And the fear is real.

Natalie Portman won an Oscar for her portrayal of a sheltered professional ballerina who physically and mentally transforms while fighting for the lead role in Swan Lake. Darren Aronofsky’s melding of horror with the agonising and competitive world of dance is a callback to Suspiria, but Black Swan‘s hallucinogenic freak-out vibes belong solely to this gleefully trashy art film in disguise.

Back in 2011 — two years before his well-received Oculus came out — Mike Flanagan released Absentia, a low-budget indie that is guaranteed to haunt you. The premise is simple: after seven long years, a woman is finally ready to declare her missing husband officially dead… until he mysteriously returns, claiming to have been kidnapped by a monster that dwells within a nearby tunnel.

It’s not a spoiler to say that there’s something that’s opportunistic, vindictive and extremely evil hanging ’round that tunnel.

This French thriller (there’s an American remake, but accept no substitutes) starts off as a sick and twisted revenge movie, then morphs into something entirely different that’s about a thousand degrees more sick and twisted. At a certain point, you may begin to question your own reality, and what caused you to think watching a movie like Martyrs was worth the weeks of sleepless, cold-sweat-drenched nights that will await you after.

Even the trailer is outrageously gory and, it must be noted, absolutely NSFW. You’ve been warned!

Ethan Hawke plays a crime writer so desperate for inspiration that he moves his family into a house without telling them that a gruesome murder happened there (and rather recently at that). He also doesn’t tell them about the mysterious home movies that he finds in the attic. As is usually the case in horror movies, holding back a big secret or two is guaranteed to cause major problems down the road. Like, for instance, an ancient demon might start stalking you and everyone you love.

Sinister also features a cameo by Vincent D’Onofrio, as The Local Professor Who Explains Everything About Pagan Soul-Eating Deities, which isn’t anything that makes Sinister scarier, necessarily, but it does make it that much more awesome.

Beyond the fact that it’s disturbing as hell, what’s special about Berberian Sound Studio is that it’s not just a straight genre homage. It certainly nails the visual style, but it’s also layered. It’s about a boring, regular guy who begins to morph more and more into a giallo character the longer he works on the movie-within-the-movie. Plus, it sheds light on a job in the biz that’s crucial to film production, but rarely gets properly celebrated. Who knew the sound of stabbing a cabbage could be so horrifically fleshy?

J.A. Bayona is on board to direct the Jurassic World sequel, but in 2007 he made his feature debut with a little help from producer Guillermo del Toro, who’d just become a big name after the 2006 success of Pan’s Labyrinth. del Toro’s film is spooky, and both films are deeply atmospheric, but The Orphanage wins (in my opinion, anyway) when it comes to the scare factor. Mothers, sons, wayward souls, children in peril, a cave and a big old house — The Orphanage has it all, and is also heartfelt in addition to being absolutely dripping with dread. 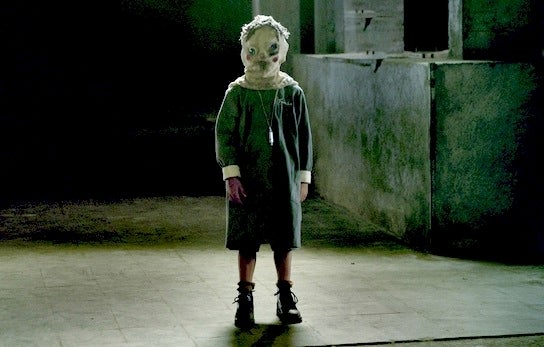 Also, it’s a reminder that one should never underestimate the oh-shit power of a mask made out of a dirty old sack. 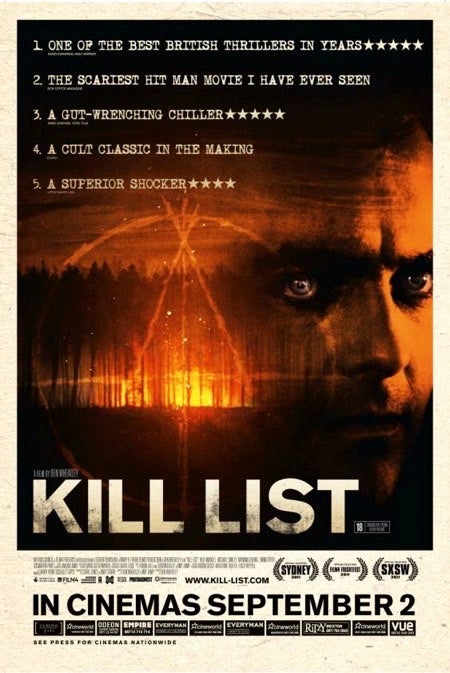 You think it’s just a hitman movie, albeit an unusually well-done one. And it kind of, sort of, is… until it isn’t. Ben Wheatley’s Kill List isn’t technically a horror movie, but you’d be hard-pressed to find anything that will shock your brain and eyeballs, and challenge your bodily functions more, than the last reel of this movie.

“This one night changes everything for me!” enthuses a money-hungry babysitter who’s still willing to hang out alone one full-moon night in a ramshackle, isolated house — even after she finds out there’s no actual baby for her to sit. Watch out, girl — it’s the house of THE DEVIL.

Ti West’s breakout film earned praise for its faithful recreation of both its 1980s setting and horror movies of the era, and rightfully so. But this is no mere stylistic exercise. It’s insanely scary and off-putting in all the right ways. And yes, that is Tom “Francis Dolarhyde in Manhunter” Noonan, rocking a skullet.

After toiling in Spider-Man land, Sam Raimi returned to his splat-stick Evil Dead roots with a horror script he’d previously written with his brother, Ivan. It’s the tale of a young loan officer named Christine (Alison Lohman) who — against her true feelings, but desperate to get a promotion — denies an even more desperate woman an extension on her mortgage payment. Little does she realise her ambition will come at an awful price: a damning curse. 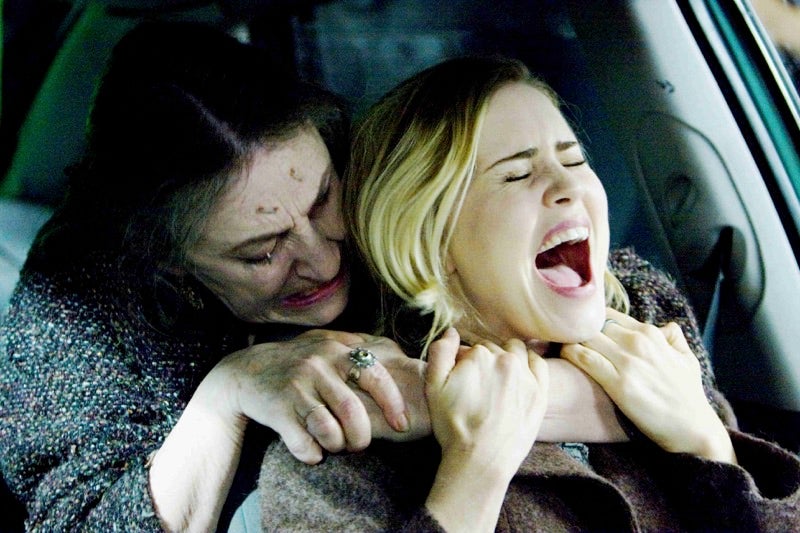 In addition to conjuring shrieks galore, the curse wields all kinds of collateral damage, threatening not only Christine’s relationship with her fancy boyfriend (demons are so inconvenient when you’re trying to impress what might be your future in-laws), but also the promotion she was gunning for in the first place. Drag Me to Hell is scary on every level, but it’s also wryly funny, too, in the tradition of its maker. Memo to Raimi: make another horror movie soon, please!

There aren’t many found-footage movies on this list, but Spanish import [Rec] found a way to transcend a tired gimmick and gift the world with something truly frightening.

The set-up is highly effective: a news crew on the hunt for a hot story stumbles directly into the path what sure looks like a category-five zombie invasion. The shaky-cam, inconsistent lighting, green-tinged “night vision” and other stylistic elements fit believably with the premise, and the fact that you can’t clearly see what’s going on all the time only adds to the scary chaos.

A slasher movie, a home-invasion movie, an intense family drama and a pitch-black comedy all in one, from Adam Wingard and Simon Barrett — the directing-writing team behind the much-anticipated The Woods (mentioned above).

Yearning for a nice country getaway? Come for the fresh air, stay for all the innovative weaponry-induced gore, not to mention all the heebie-jeebies a pack of ruthless, animal mask-wearing killers can supply.

The Last Exorcism is another found-footage flick with a narrative device structured around a film crew, but this time the central figure is a minister who’s agreed to be outed as a fraud as part of a documentary project.

The catch is that the faith-wavering guy who’s been performing faux-orcisms all this time suddenly believes he’s witnessing something all too authentically evil. Ashley Bell is outstanding as the faux possessed/genuinely possessed farm girl, and the last scenes are a betrayal of all that’s come before in the most jaw-droppingly terrifying way.

A high-calibre cast (Vera Farmiga, Lili Taylor, Patrick Wilson) elevates this “based on a true story” yarn from James Wan, who also directed the next film on this list (which also stars Wilson, as it happens). Married paranormal investigators Lorraine and Ed Warren — whose own home contains a doll so creepy it got its own spin-off movie (Annabelle, which is nowhere near as scary as The Conjuring) — are called to help a family rid their rural home of what seems to be a menacing supernatural presence.

The Conjuring does an outstanding job of ramping up the fear in every scene. There are plenty of “Boo!” moments, but the “hide and clap” scenes — a scary game even when there aren’t a couple of restless spirits hanging around — are the ones most likely to make you soil your drawers.

As mentioned above, The Conjuring‘s Wan and Wilson also teamed on this film, which is again about a family with a ghost problem (Rose Byrne plays the wife; Barbara Hershey plays Wilson’s mother) who ask paranormal investigators for help. This time, though, it’s on behalf of their apparently comatose young son, whose consciousness is trapped in a place where wandering souls hang out and try to break into the land of the living.

Now, if the wandering souls — none of which are friendly in the slightest — weren’t able to break through, Insidious wouldn’t be very scary. But they do, and it is.

Not the American remake. Get your kiddie vampires straight from Sweden.

Let the Right One In is bleak, unsettling and disturbingly violent. But it’s also gorgeous, which somehow makes it even spookier.

The eerily authentic tale delves into why the struggle to survive in rural, 17th-century America might be the scariest scenario on this list. Dangers include starvation, being blamed for everything that goes wrong in the family, being sold into indentured servitude, attracting impure attentions from one’s brother, being beaten by one’s mother and being driven mad by one’s extremely bratty younger siblings.

The whole witch-hunt thing? Yeah, that’s scary too. But actual witchcraft doesn’t seem so bad, at least not with this furry guy in the picture: 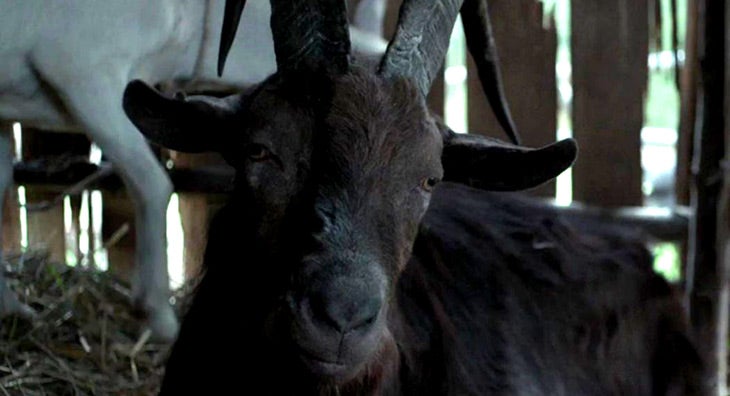 A lot of these films feature children who have attracted the interest of certain unsavoury beings. But The Babadook is in a class all its own; its family-in-crisis story feels so real that its horror elements resonate with even more nightmarish power.

It’s also beautifully made (by writer-director Jennifer Kent) and acted, with a star turn by Essie Davis as a woman who’s struggling to control her son even before a sinister children’s storybook character slips off the pages and into their lives.

Yes, the sequels have gotten a bit excessive. But the first Paranormal Activity — nearly as influential on the found-footage genre as The Blair Witch Project, and similarly low-budget to boot — was able to transform something so mundane as a slowly opening door into a sight that’s unimaginably horrific.

The slamming door seen in this trailer, of course, is the type of thing that moved unsuspecting Paranormal Activity viewers to unleash full-throated screams — and that’s just one of many moments like that in this movie.

It’s enigmatic — it can look like anyone. It never stops moving — so neither can you. What does it want? What happens if it touches you? Where the hell did it come from, and how do you get rid of it?

Enigmatic and startling, and filled with unexpected details (like the way it uses its crumbling Detroit backdrop to amp up the creepiness), It Follows is the kind of movie that scares you while you’re watching it, then re-enters your brain days, weeks, even years later. Like this scene, holy crap: