Researchers Just Found A Giant Cache Of Water Underneath California 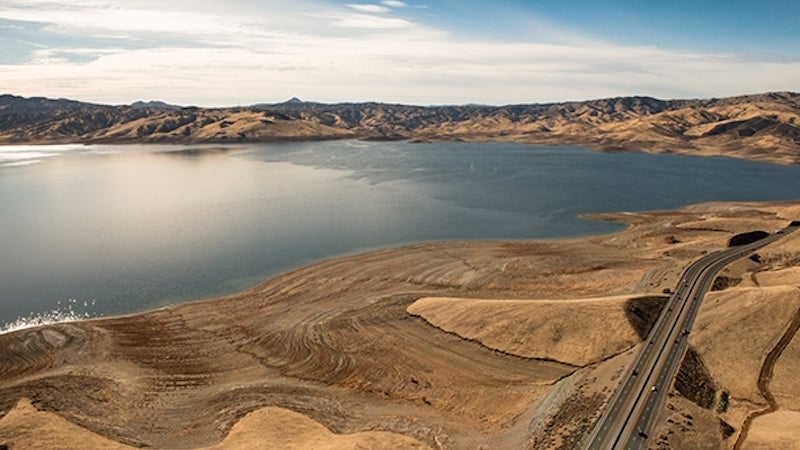 Last year, researchers estimated that California had lost 238 trillion litres of water over the course of 18 months of drought. Now, a huge reservoir of underground water — three times bigger than engineers thought — has been found under California. But it still won't solve the state's drought troubles. San Luis Reservoir (Image: California Department of Water Resources)

Researchers from Stanford University announced their find in a paper today in Proceedings of the National Academy of Sciences. Up until now, estimates of the amount of water beneath California's Central Valley were less than a thousand cubic kilometres. Now, researchers say the reservoir contains 2700 cubic kilometres of usable water, or approximately 2.7 quadrillion litres. That's several times what the state has reportedly lost. So why won't it solve California's drought woes? Part of the problem is where it was found.

Earlier estimates of the size of the reservoir were low, in part, because most studies had only looked up to 300m underground. That made sense based on old technologies, but, as the state dried up and our digging tech got better, water companies have been able to go deeper and deeper. Most of the water found by the Stanford researchers in this survey was between 300 and 900m below the surface. That's still close enough to the surface to retrieve, study leader Stanford's Rob Jackson told Gizmodo.

"It's a little more expensive to use, but some towns and businesses are already using groundwater 1000 feet [300m] or more deep," he noted. The problems, however, aren't just getting to the water; there are also questions about the quality of that water once we get there.

About 30 per cent of the underground water supplies that the Stanford researchers found run right into drilling sites for either oil or natural gas — and that means that they could easily be contaminated. There's also the possibility that, by tapping so deeply into the reservoirs, we could cause the ground to noticeably sink, a process the researchers say has already begun from relatively shallow tapping in the Central Valley.

But even if we could find a way to get to the water easily — and found it to be relatively clean when we did — it still wouldn't yet be time to fill California's pools with a slurry of bottled water and almonds. "We need to be careful about using it," Jackson told us. "California's groundwater pumping has been in overdraft for years, especially during the drought. Finding more water than expected doesn't mean we should waste it."

Plus, California's drought is just one of the worldwide droughts we're seeing. It's no anomaly. In our new, hotter climate, droughts are normal, even expected. This reservoir, then, doesn't need to just help compensate for California's current drought — it needs to help prepare for the next one, and all the ones after that.