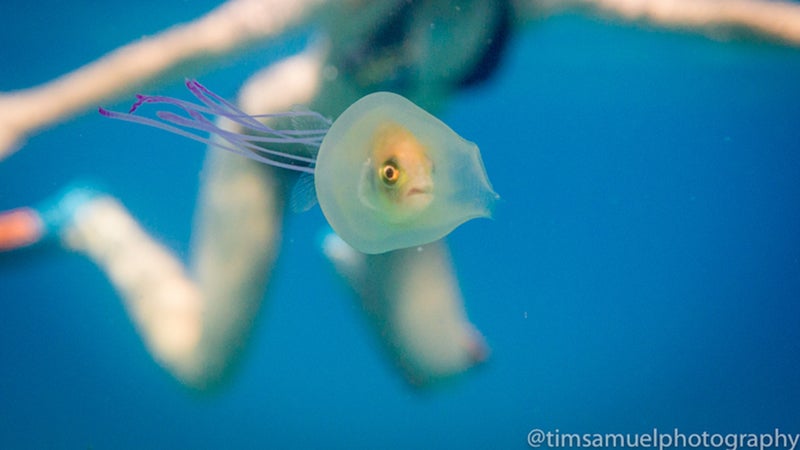 While freediving in their home of Byron Bay, Australia, photographer Tim Samuel and videographer Franny Plumridge stumbled on a rare sight: A fish stuck inside a jellyfish. The fish was apparently somewhat able to steer its new and permanent hat.

But the look on its face says it all: Oh God, what have I done. Will I die with such indignity, able to see the wide ocean before me but never again touching it?

The tragic sight of the trapped animal left Samuel, the photographer, with an ethical dilemma. “My first impressions were amazement as I had never seen anything like it before,” he told Gizmodo. “I contemplated freeing the fish as I felt bad for it, but in the end decided to just let nature run its course, which was a difficult decision for me to make.” Samuel added, “I don’t know what happened to them.”

T R A P P E D – Woke up this morning to my phone going crazy due to one my photos being reposted by @discoverocean. Here's another photo from that day. I found this fish trapped inside a Jellyfish while freediving in Byron Bay. He was trapped in there but controlled where the Jellyfish was moving. Prints are available through my website – link in bio