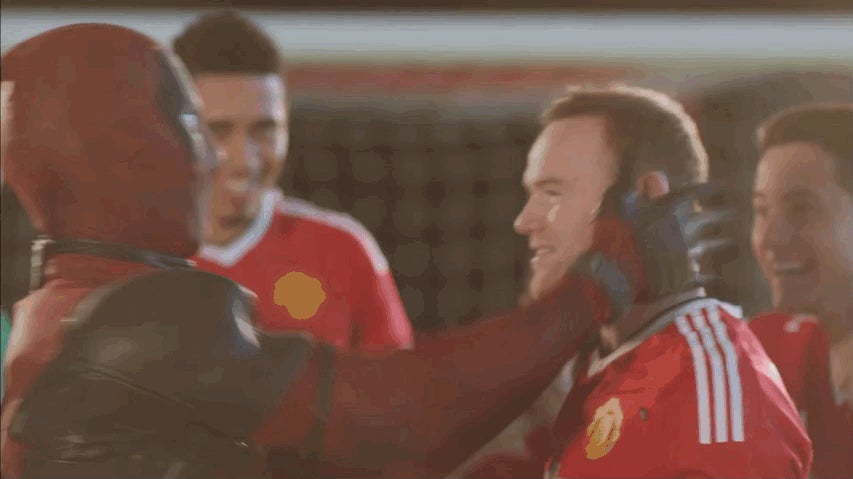 Look, for this job I watch a lot of promotional videos. Trailers and TV spots and ads and featurettes — everything studios do in the neverending pole-dance that is trying to get people to see their movies. Sometimes, movies are paid a lot of money to let other companies sell shit using their characters, and I have to watch those ads, too. And even knowing all of that, I have to ask what on Earth Fox is doing with Manchester United, which I am told is a British soccer team. The studio has inserted popular players into bits of Independence Day: Resurgence, X-Men: Apocalypse and Deadpool, and they are mind-boggling.

Here's the one for X-Men: Apocalypse, which starts with a clip from the movie and then is seamlessly edited to put soccer players in it:

And now my head hurts. Because it starts with an actual clip of the film and then delves into some "jokes". Here are a few questions:

OK, yeah, that last one isn't a question. But "Apoca-wha?" is unforgivable.

They did also did a Deadpool one, which is fine. There's no situation where Ryan Reynolds won't put on the suit and make a few jokes, so whatever. And, mercifully, no one but him talks in that one.

That's definitely Ryan Reynolds' voice, so my question here is whether it's also really Ryan Reynolds in the suit. If Man U. couldn't afford even a decent McAvoy impersonator, it seems unlikely that they could get Reynolds... except the actor has shown an almost pathological willingness to put on the Deadpool outfit for hundreds of promos for his own film. What's one more?

More recently, we got one for Independence Day: Resurgence. And, sigh, just watch it:

A few questions here as well:

These are so bad, I had to wonder if Manchester United was blackmailing Fox into making these — or the other way around. Neither side looks happy to be doing this. Except Reynolds, of course. The other two? I ended up rooting for Apocalypse and the aliens to join forces and end this world.