10 Historical People Who Were Real-Life Magicians 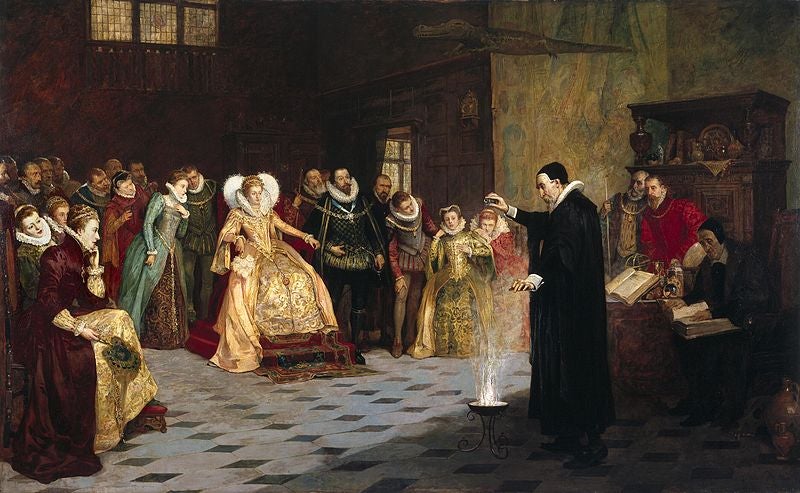 If you think magic is just for Dungeons & Dragons players and Criss Angel, you're sadly mistaken. Magic is totally real, and was totally practiced by totally real people who lived in history! Here are just 10 real-life wizards and sorcerers who used magic for a lot more than just party tricks.

This 13th-century scribe was known throughout Paris for his fine manuscripts, but it took a few centuries for people to realise (i.e., apocryphally attribute) a few books of alchemy to Flamel. These books included an introduction which casually mentioned that Flamel had also created the Philosopher's Stone, a magic item that could turn lead into gold, after researching a mysterious book in an unknown language he had purchased and deciphered. Not bad!

A 14th-century monk was one of the leading scientific minds of his day, figuring out how to fit Aristotle's philosophy and scientific theory into Christianity — no small feat — which he actually sent to the Pope! He's considered to have figured out the ingredients of gunpowder, and was a leading researcher of optics and lenses. He was also said to have predicted cars, planes, and submarines. Admittedly, all of this was probably easier since he was also said to have a giant talking robot head that could answer any question someone asked it

Alas, not the manager of the Dunder-Mifflin Scranton branch, this other Michael Scot instead was a wandering scholar and priest who travelled the world in the early 1200s. In addition to learning Greek, Latin, Arabic, and Hebrew, he studied alchemy, astrology, and may have helped Fibonacci create his famous sequence. In his off hours, apparently he would turn covens of witches into stone, fought demons, and then kicked back with friends by having spirits bring them meals from the kitchens of the French and Spanish courts. Tragically, all this magic got him stuck in the level of hell reserved for wizards, as noted by Dante in The Divine Comedy.

This Scottish border noble actually joined the English court in 1304, but switched sides during the war for Scottish independence in 1314. Unfortunately, he was caught plotting to steal the Scottish throne of King Robert, confessed his treason and was killed. Supposedly, de Soule was taught black magic by Michael Scot, and even given a magical familiar — a goblin named Robin Redcap — in true Dungeons & Dragons style. Some historians think later peoples confused William II de Soule with Sir Ranulf de Soules, who was also supposed to have practiced black magic. The locals boiled that de Soules alive, so honestly, neither of them had a particularly happy ending.

Elected Chief Rabbi of Poland in 1592, Judah was a tireless fighter for the Jewish community, even fighting his fellow Jews who would needlessly denounce other families on claims of legitimacy. It's easy to see how he developed a reputation for protecting his people from all anti-Semitism, even before the Holy Roman Emperor decided that the Jews inside the ghettos of Prague needed to be expelled and/or killed. The Rabbi created a golem to protect his people and kick anti-Semitic asses; made of clay, the golem came to life because the Rabbi knew how God created Adam, and it was sort of the same deal. The golem could also turn invisible and summon other spirits from the afterlife, so it was pretty effective — except on the Sabbath, when of course the Rabbi let it take the day off.

6 and 7) John Dee and Edward Kelley

Dee was the advisor and tutor to the first Queen Elizabeth who desperately wanted to communicate with angels and demons (that's John in the painting up top, performing a little magic for Queen Liz). Kelley was a medium who could summon angels and demons, and talk to them. Together they made quite the occult dynamic duo, as Dee really wanted to learn the language of the angels. With help from Kelley, a new language was in fact provided to Dee, called Enochian; any similarities to other languages were of course because the Angels were speaking the original language, before the Tower of Babel shenanigans. Eventually, a rift developed between the two when Kelley really wanted to start devoting his time to transmuting lead into gold, while Dee was stuck on the angel thing. Strangely, at that point an angel told Kelley that he and Dee should totally have sex with each other's wives. Dee stopped talking to the angels at that point… but still let Kelley sleep with his wife, you know, just in case. An angel told him to!

A.k.a. Rabbi Hayyim Samuel Jacob Falk. His feats were many; he could teleport items, once saved a synagogue from burning down by writing a Hebrew word on it, could go weeks without food or drink, and could fill his cellar instantly with coal with a simple spell. He could instantly tell where treasure was hidden, and if he sold something to a pawnbroker, that item would fly back to him later that day in what seems to be a magical interpretation for an unflattering Jewish stereotype. Once, when he was travelling in a carriage and a wheel fell off, the wheel followed him all the way to his destination. After nearly getting burned at the stake for sorcery in Westphalia, Falk decided to move to London in the 18th century.

9) The Count of St. Germain

This learned courtier rose to prominence in European society in the 18th century. He claimed to be the son of a prince; he was accused of being a spy in London and then hung around to give a few musical performances; he was a prolific composer; he tried to negotiate peace between England and France despite the fact that no one asked him to, especially not the King of France. He was a fascinating dude even before he started telling people he was several centuries old, could control nature, and also had the ability to combine a bunch of small diamonds into a big one. He also may have prophesied the French Revolution, but I'm pretty sure anyone with a bit of social awareness who visited France in the 1700s could have called that one.

Born in 1875, Crowley is the most modern magician on this list, so if you're were dismissing all these guys as having lived in the past when everything people didn't understand was called magic, which was pretty much everything because people were stupid, well, Crowley was performing magic until his death in 1945. Heck, he created the elaborate system of Thelema magick, which allows its practitioners to summon spirits, banish them, consecrate places, see the future, travel astrally, and more. Yes, this sounds uncannily like sorcery in Dungeons & Dragons, but Aleister Crowley never shot anyone with a magic missile… that we know of.