10 Comics That Absolutely Must Be TV Series, NOT Movies 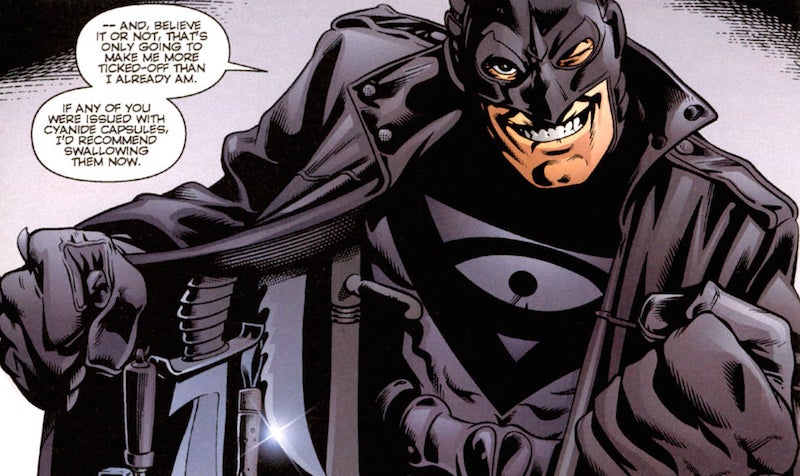 The other day, comic-book fans got an amazing piece of news: the beloved Y the Last Man is not going to be shoehorned into movie form, but will get to live and breathe as a TV show. Even though comics rule movies these days, some of them are just too big for a two-hour package.

It's just a fact that not all comics should be movies — sometimes only TV can properly capture the scope of these stories. (I mean, you're not going to get all 75 issues of Neil Gaiman's Sandman in a movie, or even three.)

At the same time, only a few comics could be adapted to television in a way that wouldn't suck, let alone be popular with the mass audience that would make such a show feasible. So with all that in mind, here are 10 comic books that would only work on television — and have a damn good chance of being actual hits.

Let's go ahead and get the most obvious candidate out of the way, shall we? The best new Marvel character of the millennium (so far) is already so popular and so obviously great that she's had rumours of a TV series in development years before Marvel even planned on putting Captain Marvel in theatres. A young girl fighting crime and villains on the mean streets of Jersey City, balancing being a hero with school and her family? A positive representation of Muslims in America? Frankly, limiting Ms. Marvel to a movie would be a waste. We need Kamala Khan in our living room once a week, 26 weeks a year, in order to get the full extent of her family, her world, and her adventures. Admittedly, a live-action TV series would likely have to forgo the giant, teleporting Inhuman dog Lockjaw and most of her training with the Inhumans, but that's a small price to pay.

One of DC's most underrated comics, Midnighter stars the former member of Stormwatch and the Authority, who was essentially created as "gay Batman," in a romantic relationship with the Superman equivalent Apollo. In his newest series, written by Steve Orlando, Midnighter and Apollo have broken up, leaving Midnighter to find his identity… and beat the hell out of many bad guys along the way. He's like Batman with a sense of humour and a willingness to engage in healthy relationships. And because his powers mainly involve enhanced strength and speed, and mild precognition, all you really need for SFX is to show him kicking absolute arse. Seriously, check out this comic. And, if you're a TV executive, give Warner Bros. a call. 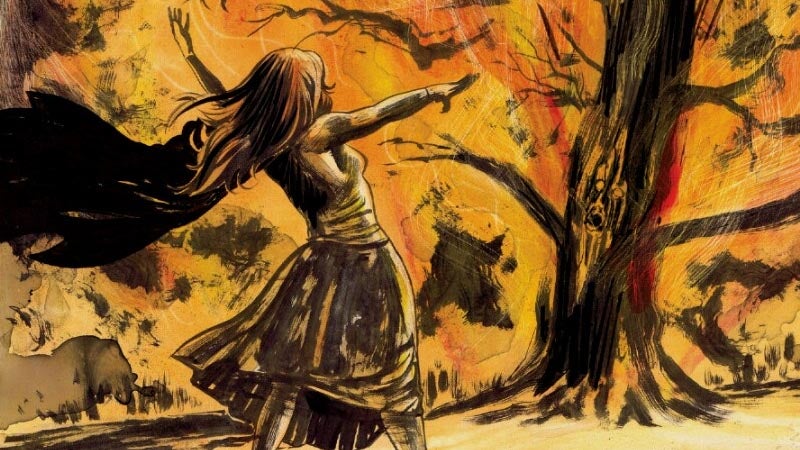 3) The Chilling Adventures of Sabrina

"Oh ho!" you say. "But Sabrina the Teenage Witch has already had a TV show, and it wasn't that good!" you say. Well, true, but I'm not talking about that Sabrina; I'm talking about the current reboot from Archie Comics and Roberto Aquirre-Sacasa, titled The Chilling Adventures of Sabrina, which has taken the formerly family friendly series and injected full-blown Satanism into it. Yes, these witches worship the devil and have some pretty sinister rites; as a half-witch half-human, Sabrina is torn between the world of dark magic and regular teenage life. People die. Corpses are raised. People more evil than Sabrina's satanic aunts are on the loose, and they want Sabrina dead. This could be an instant high school drama/horror hit. 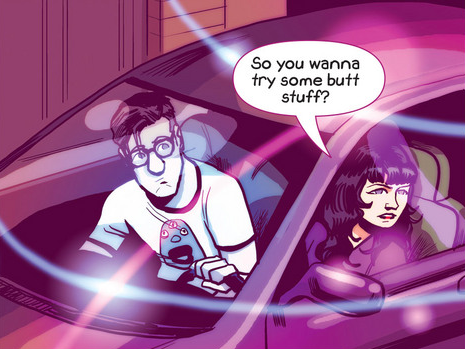 As much as we love Matt Fraction and David Aja's run on Hawkeye, we understand that Marvel is never going to take Jeremy Renner out of the movies and put him on TV. But that's ok, because Fraction has another comic perfect for a TV series… as long as that series is on pay cable, because an adaptation of Sex Criminals needs to be as MA-rated as Game of Thrones is (if not Skinemax After Dark). The tale of a couple who discover they can stop time when they have sex — and use this power to robs banks — Sex Criminals is utterly absurd, hilariously funny, and realistically sexy. Plus, about the only real "superpower" effect that would need to be used is pausing time, which would be well within an HBO budget.

Remember when Lost was at the top of its game, and it was full of compelling characters and mysteries you were dying to see solved? Well, Matt Kindt's Mind MGMT is, in that sense, like Lost. It's an epic conspiracy series starring a true crime writer named Meru who investigates a plane flight where all the passengers get amnesia at once, which gets her mixed up in an unsolved plane crash, and a shadowy government organisation where the agents seem to have psychic abilities. Honestly, Fringe might be a better comparison than Lost, but to the comic's fans, the story is as compelling as Lost was at its height. Any TV network would be lucky to adapt this. 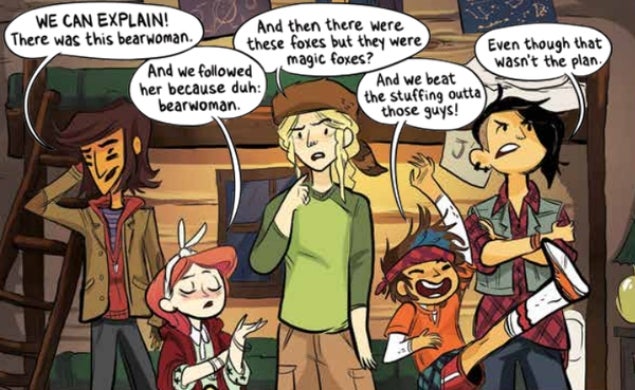 If you mention the hit series Lumberjanes and a TV adaptation, I think most people immediately think about a cartoon version, which would be great! Artist Brooke Allen's fantastic designs are screaming to be animated, and this story about a group of young girls stuck at a summer camp full of supernatural mysteries and monsters would be a perfect companion piece to brilliant but accessible series like Steven Universe and Adventure Time. It would also work as a live-action show for kids, complete with monsters of the week. Just make sure you either hire writers Noelle Stevenson, Shannon Watters, and Grace Ellis, or someone who recognises how perfect their writing is, because a bad adaptation of Lumberjanes would be a crime. 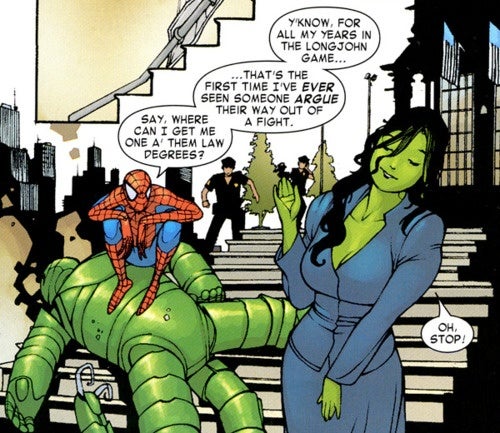 When Charlie Jane did a list of comics that could be shows, she mentioned She-Hulk immediately, and rightly so. As a lawyer of the superhero world, She-Hulk both prosecutes and defends superheroes and supervillains for a mix of humour and drama. Just think of all the lawyer shows that have dominated TV over the past two decades! Combining that with the superhero craze is a recipe for success, and Jennifer Walters wouldn't even need to Hulk out that much in order to capture an audience. I'm sure Marvel would be a little dicey about suddenly giving Bruce Banner a cousin when it still seems to be trying to figure out how to handle the Hulk in the movie-verse, but if Howard the Duck can be part of the MCU, surely Shulkie can. 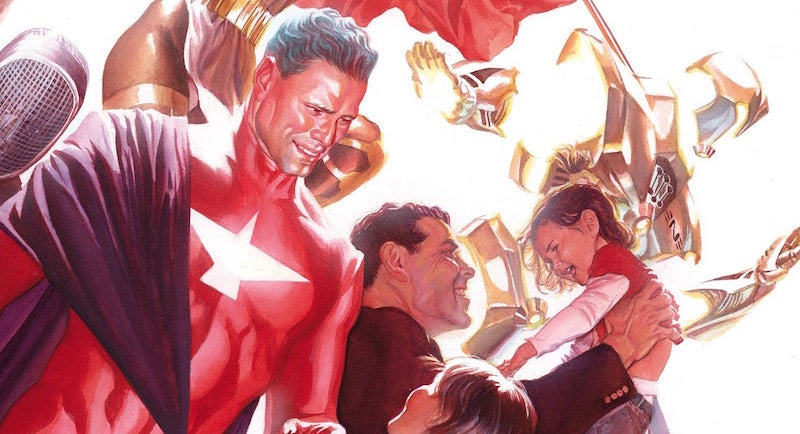 Kurt Busiek's acclaimed superhero series has had a movie in development more than once, but never a TV series. I think this is the wrong decision. The real power of Astro City is in its entirety, the massive world and cast of characters that Busiek has created. Sure, a movie could do justice to maybe one or two of the story arcs, but would that be better than seeing all sides of the city through a long-running TV series? I think not. Yes, Astro City is likely the most difficult series on this list to adapt, given all the special effects that would be needed for the heroes. However, by sticking to the Astro City stories that are seen through the eyes of the normal people, the show could minimise these costs, while providing a fresh take on the superhero genre mass audiences would find fascinating. 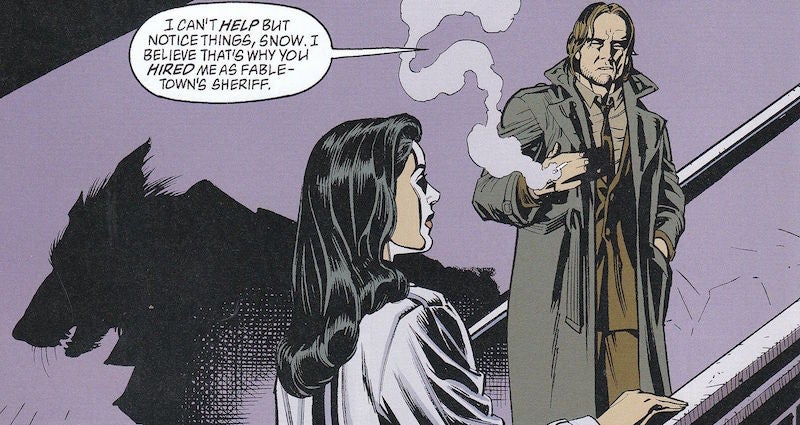 You know how I know a show based on Bill Willigham and Mark Buckingham's epic Fables comic would work? It's because Once Upon a Time is almost exactly the same show — just way worse — and it's on season 5. Fables might not be first story about fairy tale characters living in the real world, but it's absolutely the best. In fact, both NBC and ABC had a Fables show in development at one point, then changed their minds, and then aired different fairy tales-are-real shows: Grimm and Once Upon a Time, respectively. Fables sets itself apart with its huge cast, elaborate relationships and backstory, and it's perfect mix of drama, comedy, action, and whimsy. Plus, it has the romance between Snow White and Bigby the Big Bad Wolf, one of the best relationships in comics. CBS, do yourself a favour and get the real deal. 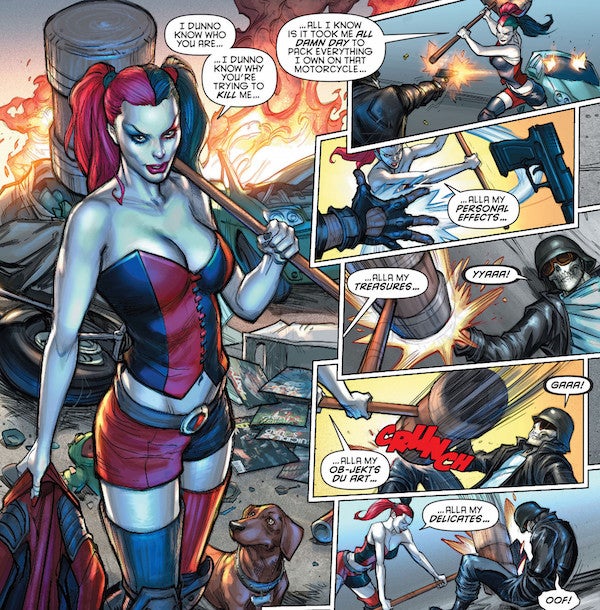 Yes, Harley Quinn is about to make her movie debut in the Suicide Squad movie, but Warner Bros.' only real rule seems to be that Batman and Superman aren't allowed on TV. So it's within the realm of possibility that Harley could have her own show, assuming she stayed away from the Batman universe. Luckily, Jimmy Palmiotti and Amanda Conner are writing exactly that in their current Harley Quinn comic, as Harley reclaims herself after he lengthy, abusive relationship with the Joker, moves to Brooklyn, and somehow becomes a landlord for a building full of oddballs (and many, many pets) while hiring herself out as a bounty hunter, bodyguard, babysitter, or whatever, to people who need cash. The comic would translate to TV so easily, with each weekly adventure being a mix of comedy, drama, and splatstick violence. Look, Harley's too great a character to waste as the Joker's "love" interest — give this Harley her shot on TV, and soon everyone will agree.

Andrew Liszewski 07 Apr 2020 10:30 PM
Little did we all know just how much time would be spent in video conference calls as part of work from home life. Creative Technologist Matt Reed has already reached his capacity for Zoom meetings, so he created an AI-powered digital twin that can sit in on calls for him, complete with voice-activated automated responses.