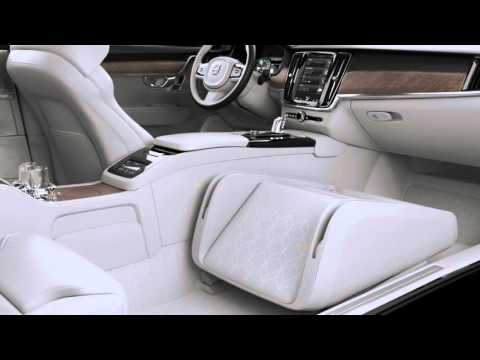 Most would think that motor vehicles and lounge rooms have no place gallivanting with one another. Not Volvo. The Swedish carmaker will debut their innovative new ‘Lounge Console’ in their upcoming flagship sedan, the S90 Excellence.

To show off the unconventional cabin design, Volvo has created a sculpture to explain how the concept would work in the Volvo S90. Both areas of work and play are catered for with the removal of the front passenger seat where an intuitive work station now resides.

The work station features fold-out surfaces, drink holders, a mini refrigerator, luxury glasses by Orrefors and a pivoting large screen which can hook up to any work device such as a Macbook. When it comes time to relax, the lounge reclines to offer ample leg space as well as heated foot support with an automatic ottoman.

Don’t take our word for it, though. Watch in awe at the video above explaining the technology.