The Way Cancer Cells Spread Is Even Scarier Than We Thought 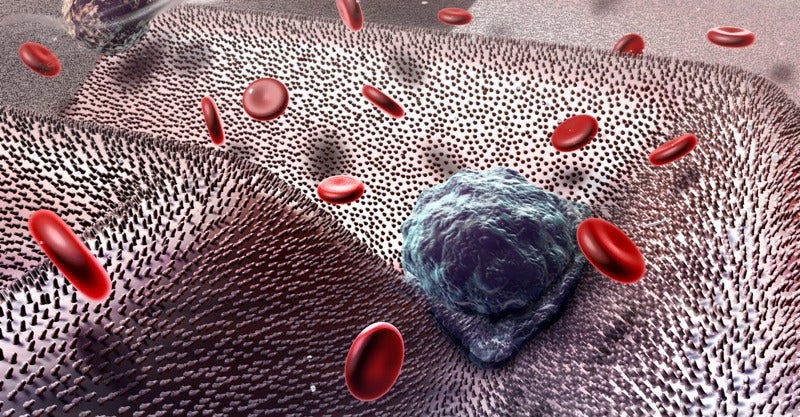 Cancer cells have a terrifying-yet-ingenious way of passing through even the smallest blood vessels to spread throughout the human body, according to a new study by researchers at Massachusetts General Hospital. Figuring out how to prevent them from doing so may help slow down the spread of this killer disease.

Cancer spreads throughout the body — a process known as metastasis — when certain cells break off from the primary tumour and enter the bloodstream. Metastasis is the leading cause (90 per cent) of all cancer-related deaths. Scientists had assumed that larger clusters of these cells were just too big to pass through ultra-thin capillaries. The MGH researchers found this is not the case. Rather, clusters can rearrange themselves into a single strand, much like beads on a chain, when they encounter a bottleneck — and once they're through, they just reassemble back into a cluster on the other side. The team published its findings today in the Proceedings of the National Academy of Sciences.

"This information changes the standard narrative of how metastasis [begins] and allows us to devise better ways to combat it," lead author Sam Au said in a statement.

Scientists have long suspected that clusters of so-called "circulating tumour cells" (CTCs) play a key role in helping cancer spread. Past studies reported the presence of fairly large clusters in the veins of deceased patients' arms, for example — far from the site of the original tumour. That means the clusters must be passing through even the smallest blood vessels (capillaries).

But scientists had no idea how the clusters managed that feat, since they are so much larger than those vessels. That's because the cells are very rare, and hence extremely difficult to separate out from the billions of other kinds of cells floating around in the bloodstream: red blood cells, white blood cells, and platelets, primarily. It's like looking for the proverbial handful of needles in a very large haystack. And that makes it tough to study them closely.

To separate out the clusters for their experiments, the MGH team relied on recent advances in microfluidics — a.k.a. "labs on a chip," a common tool for diagnostics because they can rapidly process large volumes of blood. With these microfluidic chips, you can get rid of the haystack via a process called "negative depletion." You successively remove 999 billion cells, then 999 million cells, then 999 thousand cells, and so forth, until you're left with a handful of precious CTCs.

Last year, co-author Mehmet Toner used such a chip to determine that clusters were more common in the bloodstream than previously believed. For this latest paper, the team designed the channels etched onto the chip to taper off in key spots, forming bottlenecks roughly the same width as capillaries. Then they filmed the movement of CTC clusters through those channels.

Next, the MGH team injected human CTC clusters into the blood vessels of embryonic zebra fish — selected because their transparent vessels make imaging much easier, and also because those vessels are about the same size as human capillaries. In both cases, the clusters simply unfold into a long chain to pass through the bottleneck, then reorganise back into a cluster on the other side. This was true even for larger clusters of more than 20 individual CTCs.

According to Au, this strange behaviour seems to be linked to how strongly the individual CTCs stick to each other in the cluster. Cells interact with each other all the time, and in this case, the preexisting connections are so strong that the cluster can easily reconfigure itself, without damaging the individual cells in any way, or preventing them from proliferating in the future.

The good news: this provides a clue for possibly limiting their spread. "If we can change that strength-either by breaking clusters up into individual cells, or preventing them from unfolding — we might be able to control their ability to pass through narrow vessels," said Au.