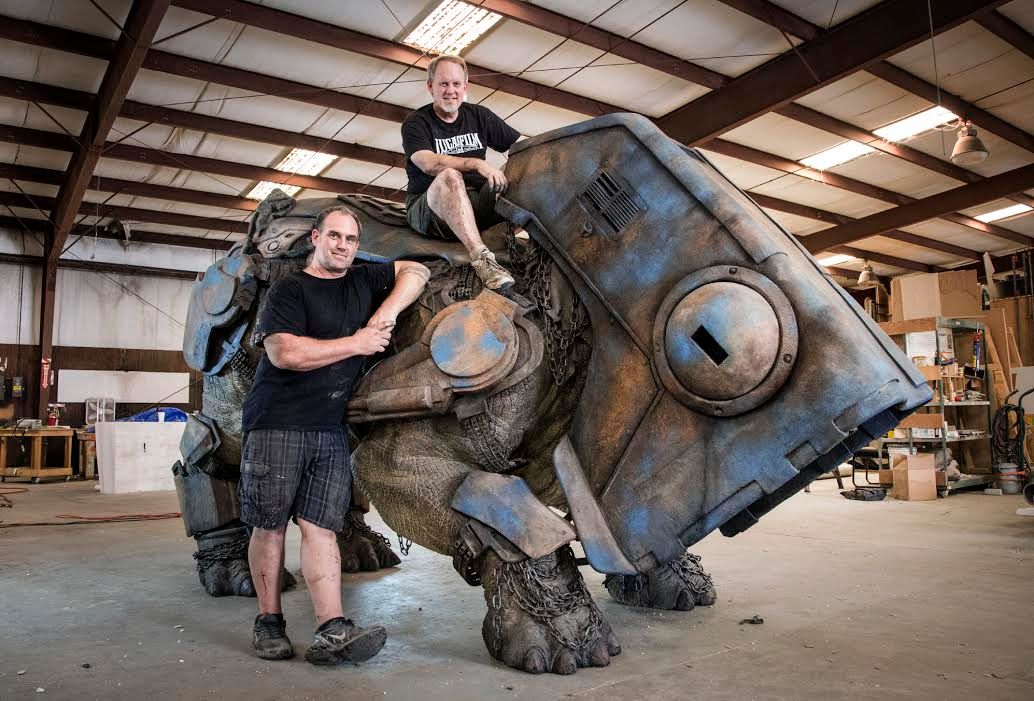 Image: Erik Hollander If you've been to a major convention around the United States, there's a good chance that you've bumped into Roxy the Rancor, a 1:1 scale prop replica of Jabba's pet beast from Return of the Jedi. Now, its creators have built a new major prop that you'll see on the convention floor soon!

Roxy is a massive creation: she towers over any convention floor that she's standing on, and has attracted pictures from anyone who passes by - including Mark Hamill and George Lucas. 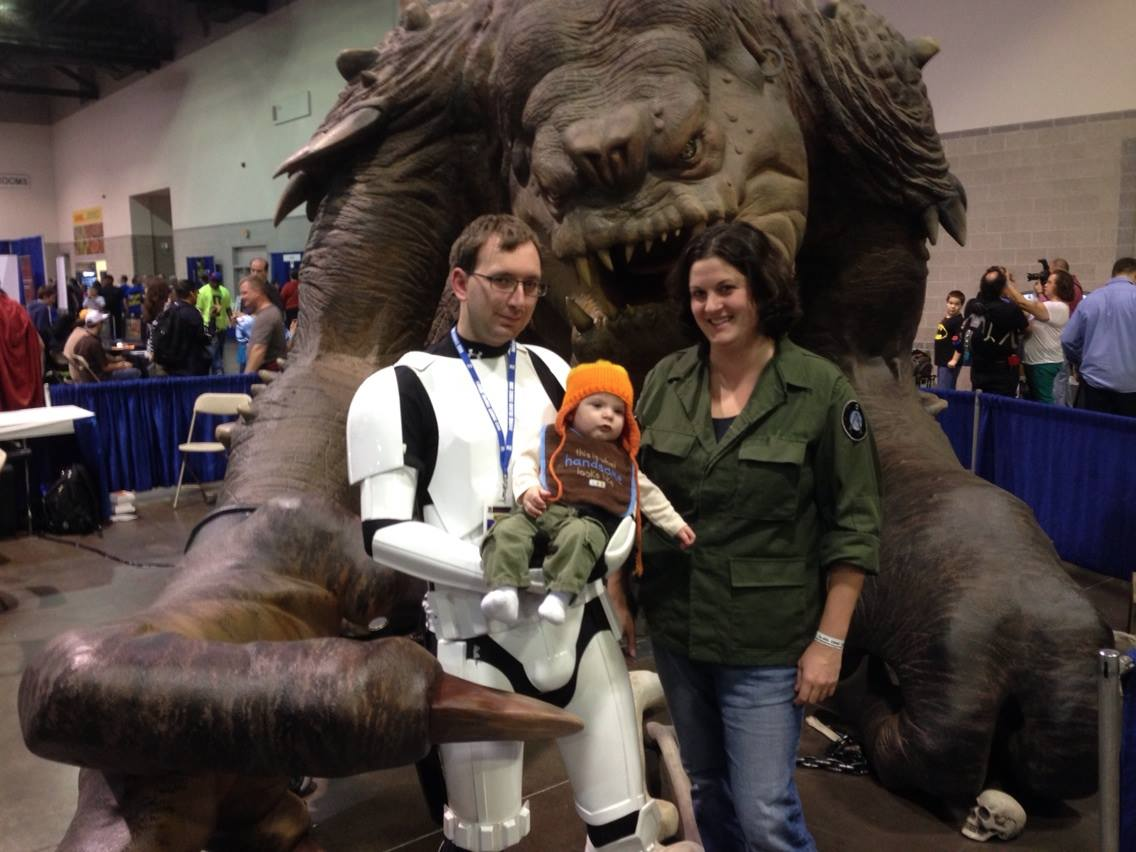 Image: Andrew Liptak Given Roxy's popularity, her builders, Rick Bohler of Pizzazz Scenic Contractors, Inc, and Erik Hollander, have been discussing how to do some sort of followup. With the release of Star Wars: The Force Awakens, they decided to look at one of the creatures from the film.

They narrowed their selection down to three of the large animals: the Luggabeast, the Happabore and the Rathtar. "We felt the Luggabeast was significant since it was the first scene where Rey meets BB-8," Matt Paisley, the beast's events coordinator and part-owner, told io9, "and we know there are a lot of Rey cosplayers out there who would love the opportunity to recreate that scene!" 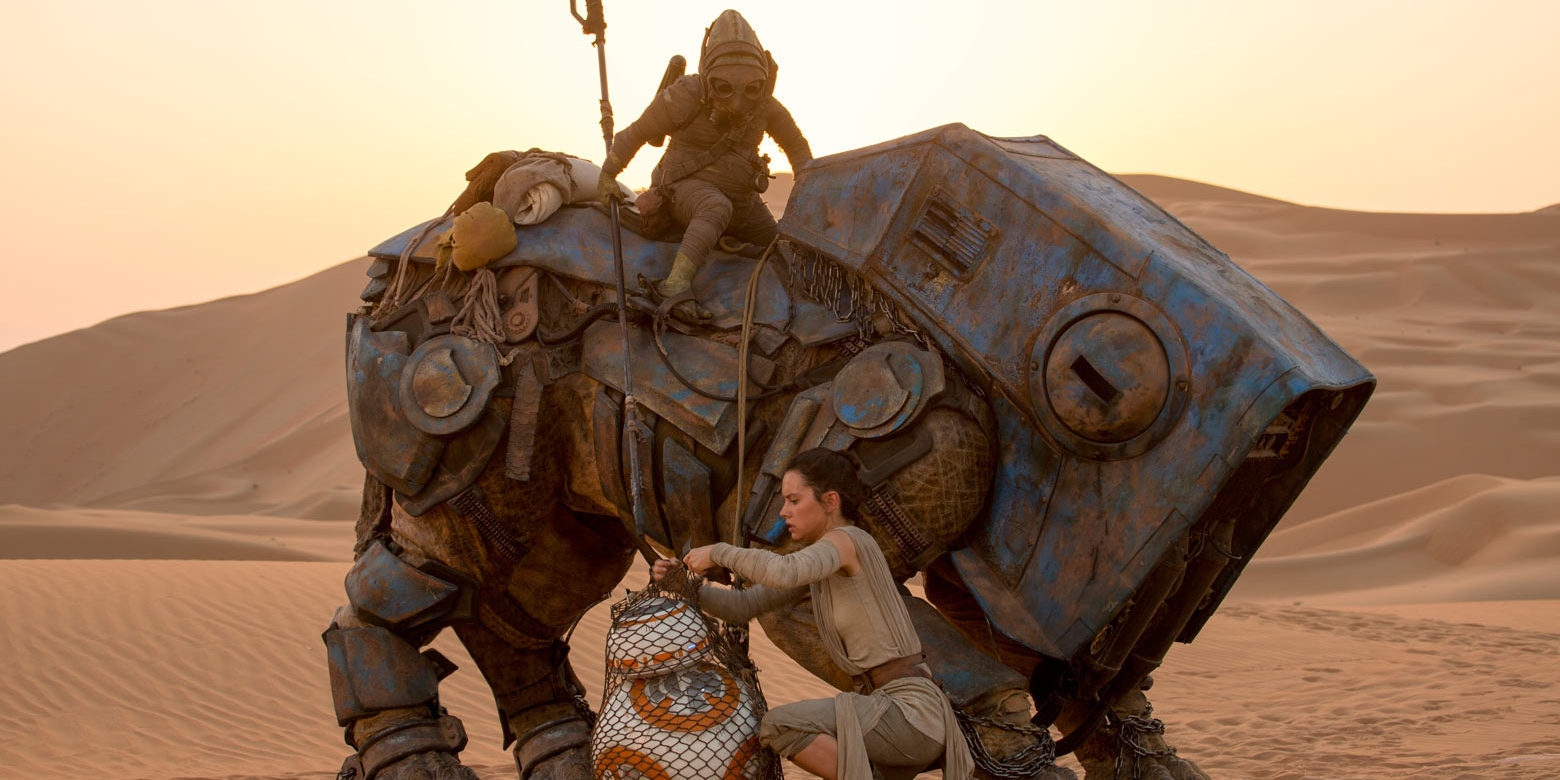 The team set about sketching the beast, working off of the film, and with "some detailed references from some 'friends in high places' along with the accurate dimensions of the original practical prop used on set."

They constructed a wooden frame, on which they mounted the sculpting foam and detailed parts. The beast's texture was then sculpted from the foam. The entire build took 320 hours of sculpting, preparation and construction, with an additional 160 hours of painting.

From the onset, the prop was designed to be transported, but also to hold up to crowds of people gawking at it. The team can break the beast down into two separate, large wooden parts: the body and the head.

"This Luggabeast is as film accurate as we could get with the help of those 'friends in high places.'" Paisley noted. "There aren't a lot of good reference photos from toys or books, so that was key to getting things right. Pictures just don't do this justice due to the sheer size and phenomenal detail that Rick and Erik put into it."

Here's some pictures from the build: 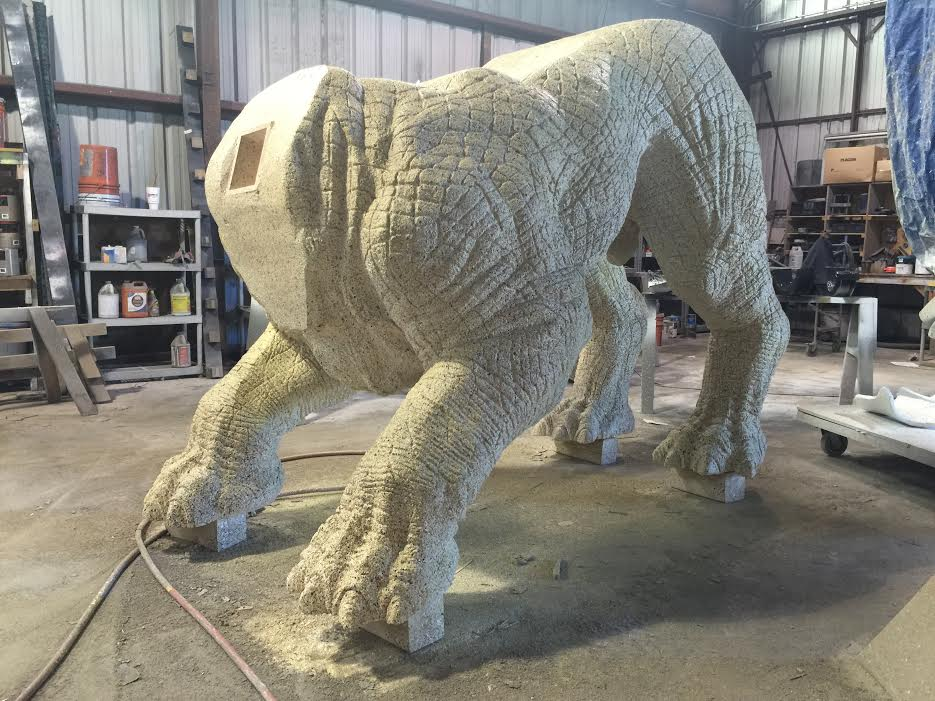 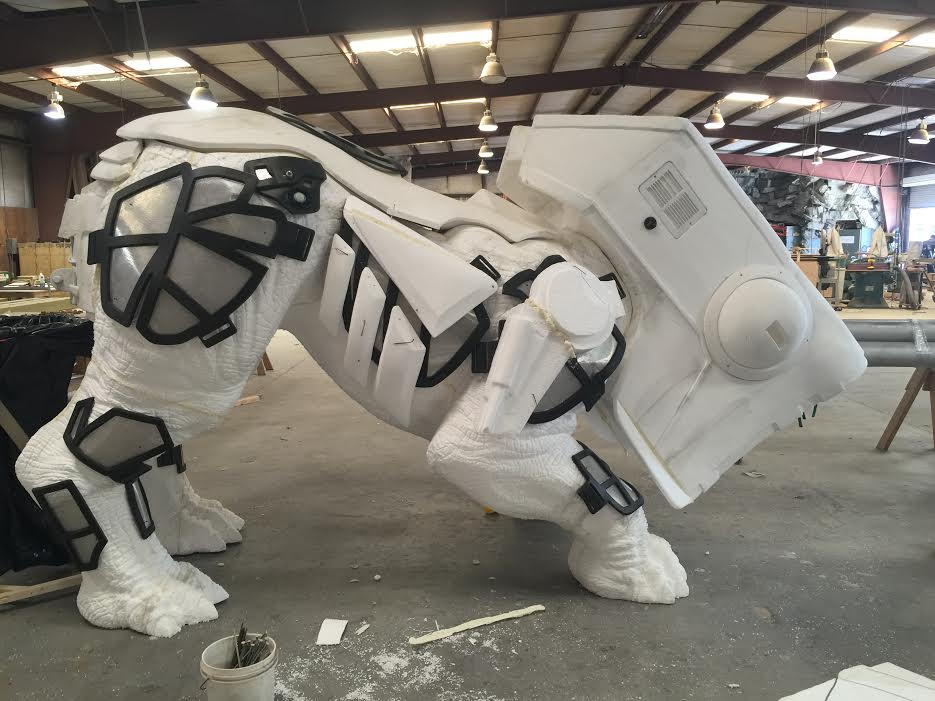 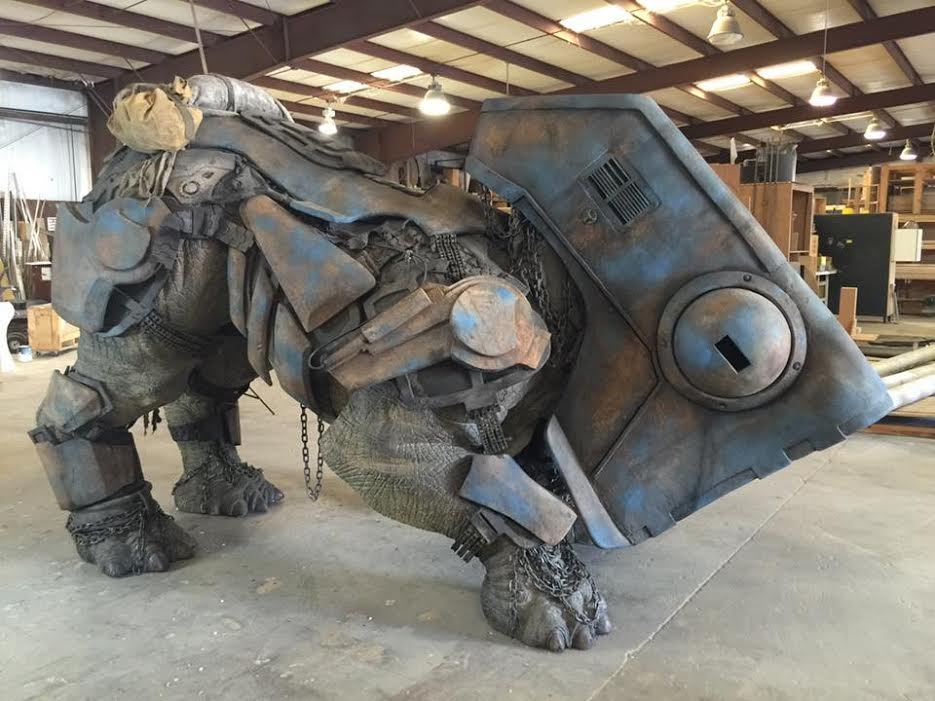 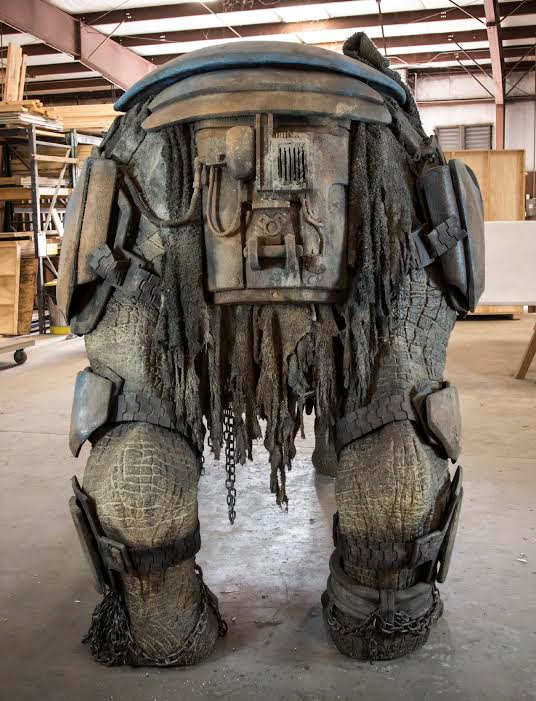 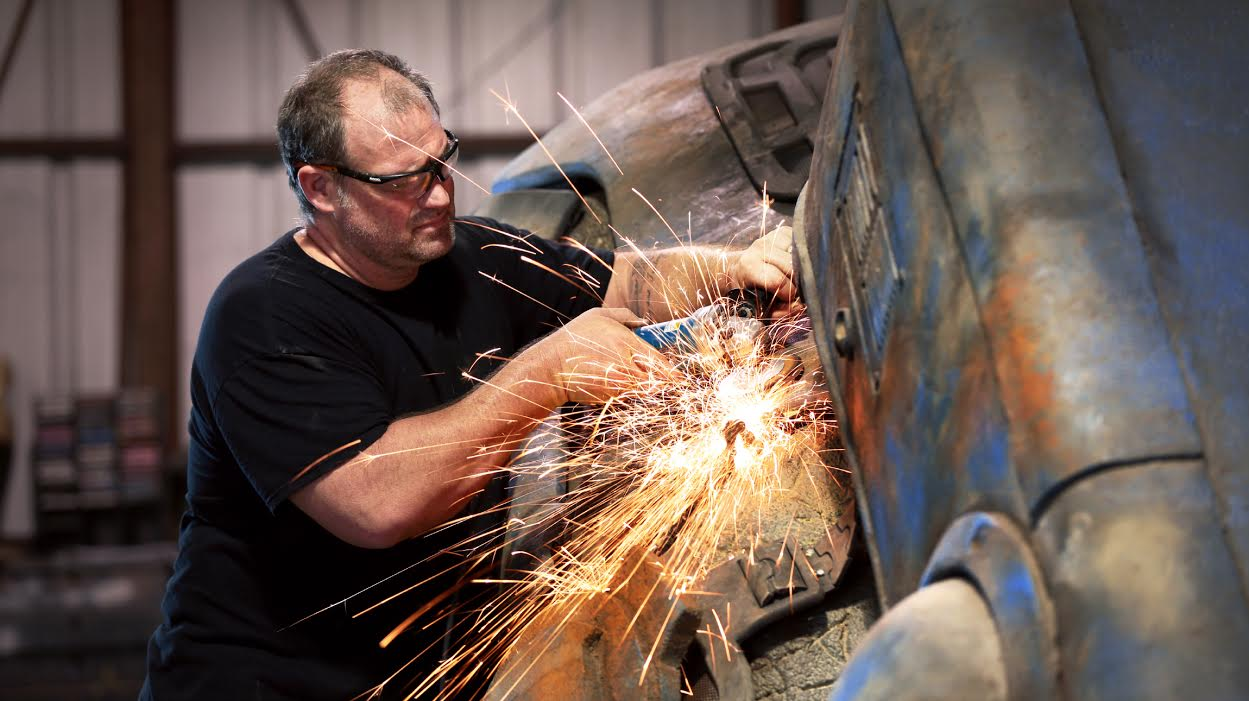 Image: Erik Hollander "We learned a lot from our first project, Roxy the Rancor," Paisley noted, "and we're excited to put that knowledge to use for the Luggabeast!" The next step for the team will be to build Teedo to sit atop the prop and "yell alien insults to passers-by."

Even without its rider, the Luggabeast will be making its first appearance later this week: congoers attending MegaCon in Orlando, Fla. on May 26th will be able to see the prop, displayed along with its sister beast, Roxy. Both will then head over to the Dallas FanExpo in Texas in early June.

The team noted that their Luggabeast needs a name, so they're asking fans to help select a name by voting from now through Saturday, May 28th. The final name will be revealed next week on Sunday, May 29th at MegaCon.