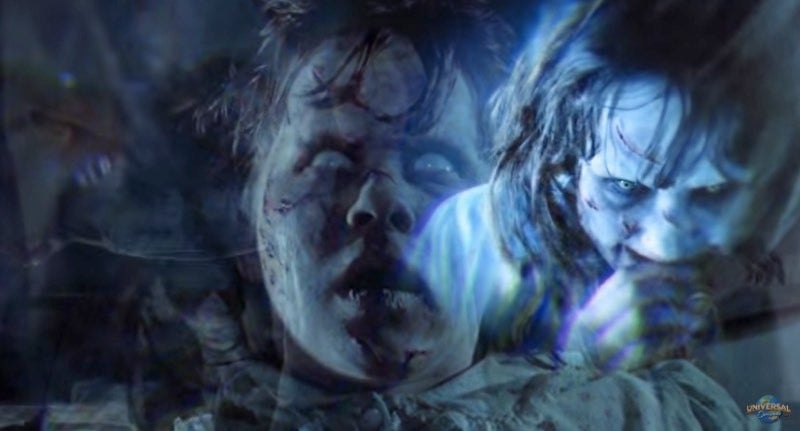 It's never too early to start thinking about Halloween, especially when you might need to plan some travel in tandem with the holiday. For the first time ever, Universal Studios will be incorporating The Exorcist into its popular "Halloween Horror Nights" theme-park events in Orlando and Hollywood.

According to Universal Studios' press release, which might be the only press release I've ever received that contains the words "vomit-wrenching," the attraction will supply nightmare material for the rest of your days:

At Universal Orlando Resort, guests will see, hear, feel — and even smell — every iconic levitating, head-spinning, vomit-wrenching, skin-crawling moment from the film. They will be paralysed with fear as they witness the power of the supernatural, scream uncontrollably as they become part of Regan MacNeil's possession and run in terror as they try to escape the horrific battle between innocence and evil.

Universal Studios Hollywood's "The Exorcist" maze will resonate as a real life interpretation of the demonic film, daring "Halloween Horror Nights'" guests to live the nightmare experienced by a tortured Regan and her determined mother. The maze will recreate some of the film's most haunting scenes, ushering guests into its unparalleled terror as if their very souls were possessed by the devil.

By "some of the film's most haunting scenes," do they also mean the horrific medical tests Regan endures before she goes full Pazuzu? The below promo video, which is heavy on bed-rattling and pea soup, suggests not — though for my money those spinal tap scenes are just as traumatic.

The "Halloween Horror Nights" events kick off September 16, so you have plenty of time to get that Captain Howdy costume in order.