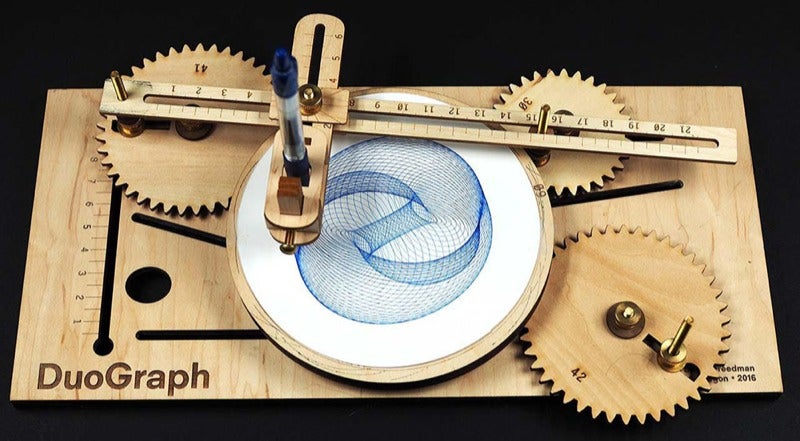 Remember that nifty Cycloid Drawing Machine making the internet rounds back in March? Its inventor, Joe Freedman, is back with a smaller, simpler version called the DuoGraph, making it easier than ever to create pretty swirling patterns reminiscent of Spirograph. The Cycloid Drawing Machine is awesome, but it's a complicated machine, and bulky to boot. The DuoGraph only has seven gears and measures 14-1/2 x 6-2/3 inches — small enough to fit on just about any desk. It's actually a redesign of the first drawing machine Freedman ever built, called the Primograph because it exploited the relationship of prime numbers to produce so-called "Lissajous curves".

What about the underlying maths? Per Freedman's Kickstarter page:

The turntable has 60 teeth. When combined with a drive gear that has 30 teeth you'll get a pattern that has 2 nodes. Adding a prime number gear for the fulcrum makes the drawing into a non-repeating line. Using a stationary fulcrum the line will draw back onto itself after a number of turns.

Changing the penholder positions adds even more complexity to the drawings.... All of these drawings used the same setup: a 30 tooth gear as a moving fulcrum and a 41 tooth gear as the drive. The only difference is the position of the penholder. Infinite variations are possible. Imagine how many possibilities there are using the 16 gears in various combinations.

"One beta user called it cute. It is cute. And less forbidding than the Cycloid," Freedman writes. "It's there to have fun and not take itself too seriously!" His fans clearly agree. With 12 days to do in his Kickstarter campaign, Freedman has already raised more than $US21,000 ($28,038) — well above his original modest $US1750 ($2336) goal. Unfortunately he's only making 100 of these ingenious contraptions this year, and he's already sold out. DuoGraphs will begin shipping in June. Hopefully he'll release a larger batch next year.