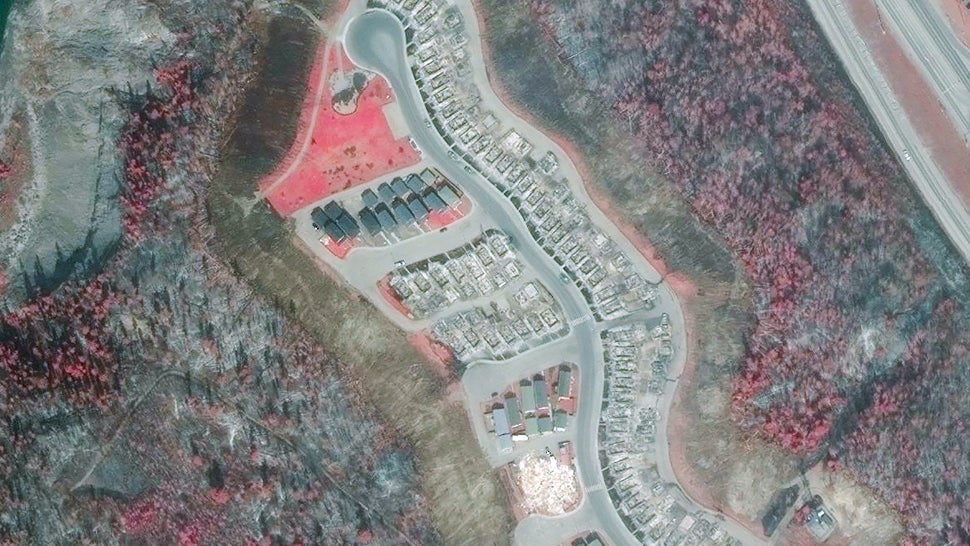 Bushfires continue to ravage the Canadian province of Alberta, and experts say they could double in size and take months to extinguish. Here are the latest space-based images of this unprecedented natural disaster. Fire crews in Fort McMurray say it will be weeks before the city is deemed safe. Bushfires began to spread through the city early last week, destroying nearly 2500 structures.

Mercifully, around 85 per cent of the city remains intact, including the hospital, municipal building, hotels and all its schools. Around 80,000 residents of Fort McMurray were evacuated, of which 40,000 are in Edmonton. Adding insult to injury, a stomach flu is now making the rounds among the evacuees.

Before (left) and after (right) shots taken by the WorldView-3 satellite reveals the devastation. (Image: DigitalGlobe)

DigitalGlobe, a provider of hi-res Earth-imagery, provided Gizmodo with these photographs, which were captured by its WorldView-2 and WorldView-3 satellites last week. 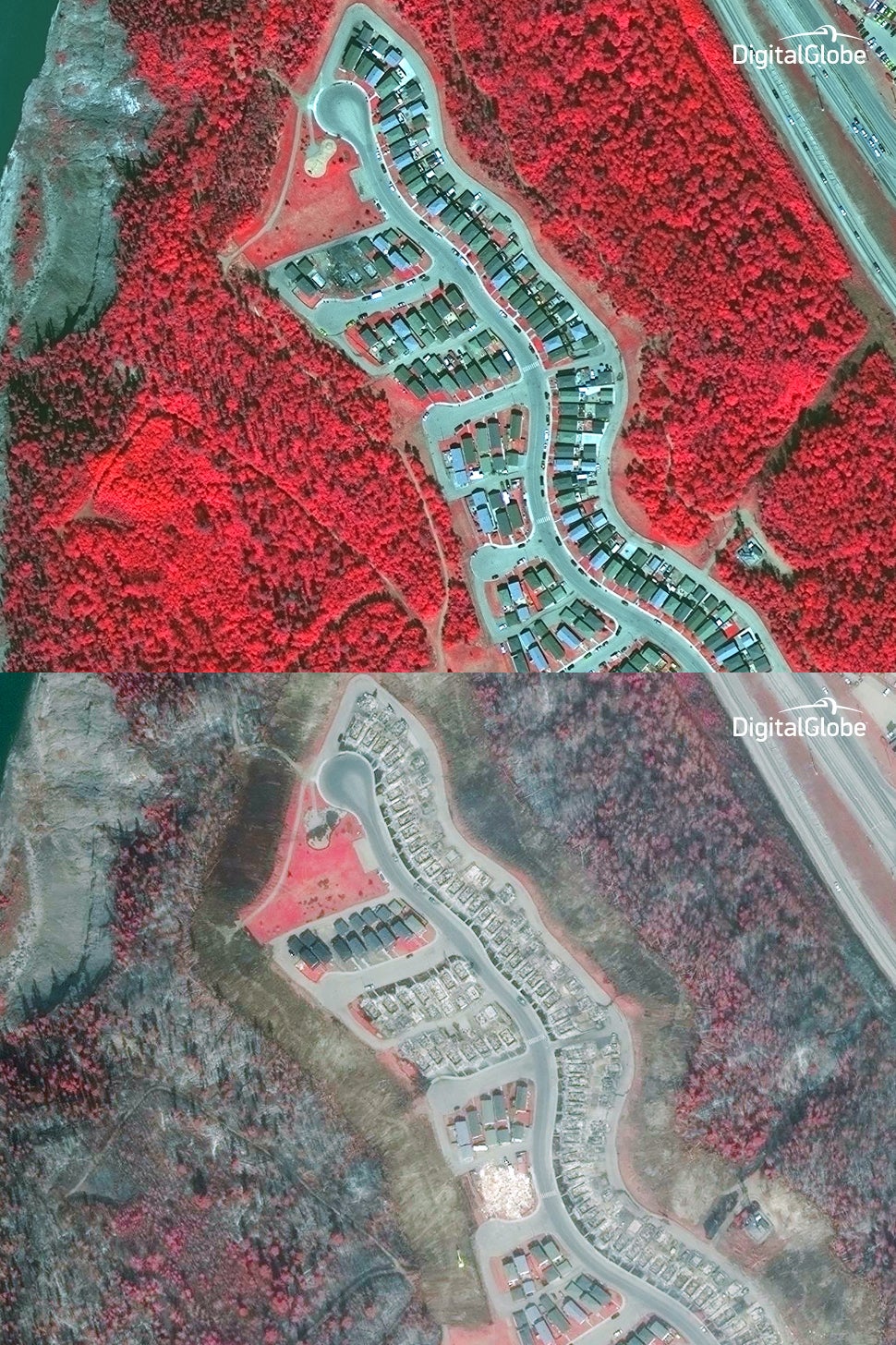 WorldView-2 "sees" the world in eight spectral bands, four in the visible part of the spectrum, and four in the invisible, near-infrared part of the spectrum. Near-infrared imaging helps scientists understand the health of the vegetation on the ground; in these false-colour images, the bright red areas represent healthy forest land. In the "after" images, the burnt-out areas show up as black and grey. The "before" images shown here were taken last year on 29 May 2015. 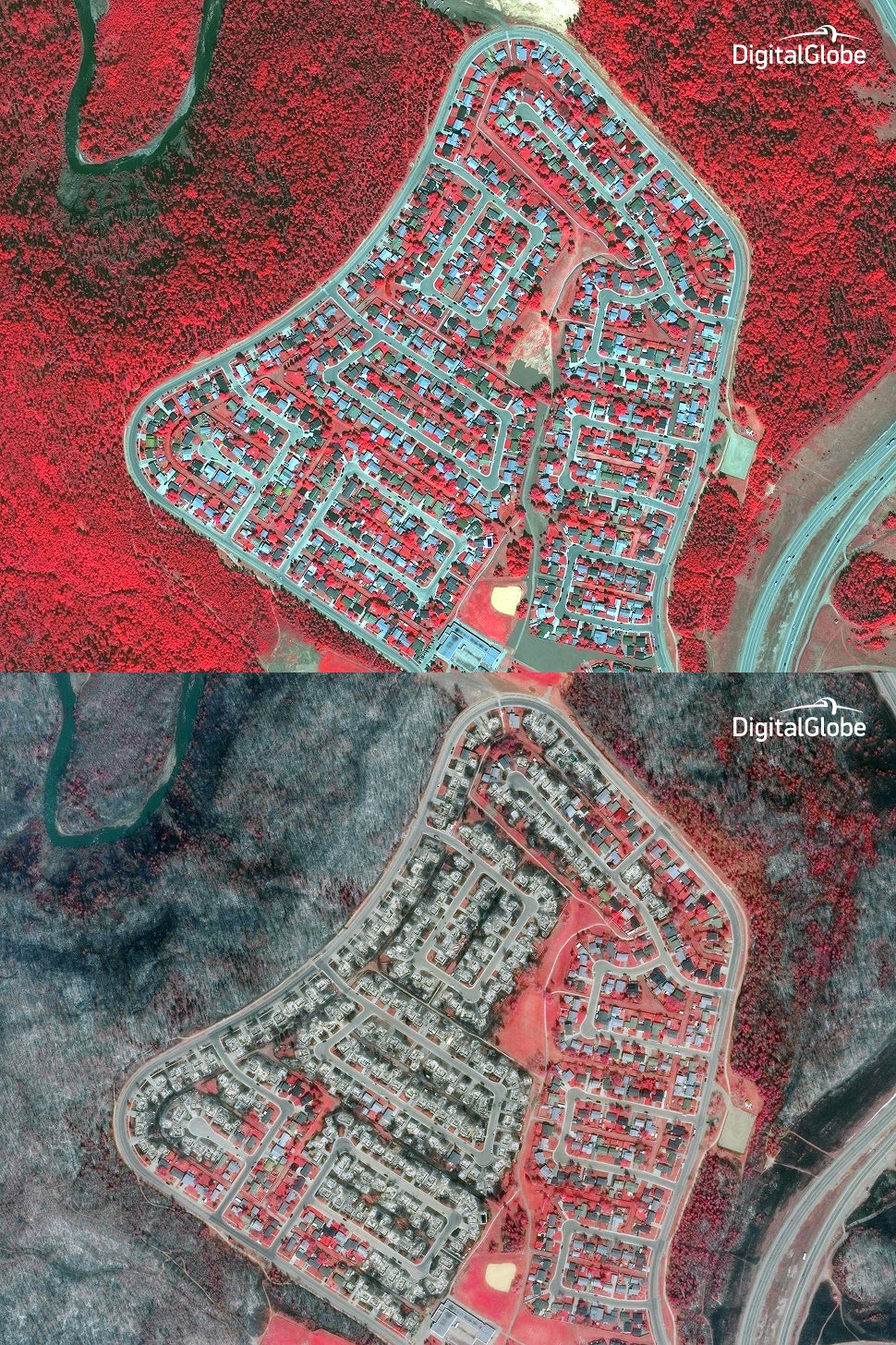 DigitalGlobe also imaged the Fort McMurray area on 5 May 2016, with its WorldView-3 satellite. 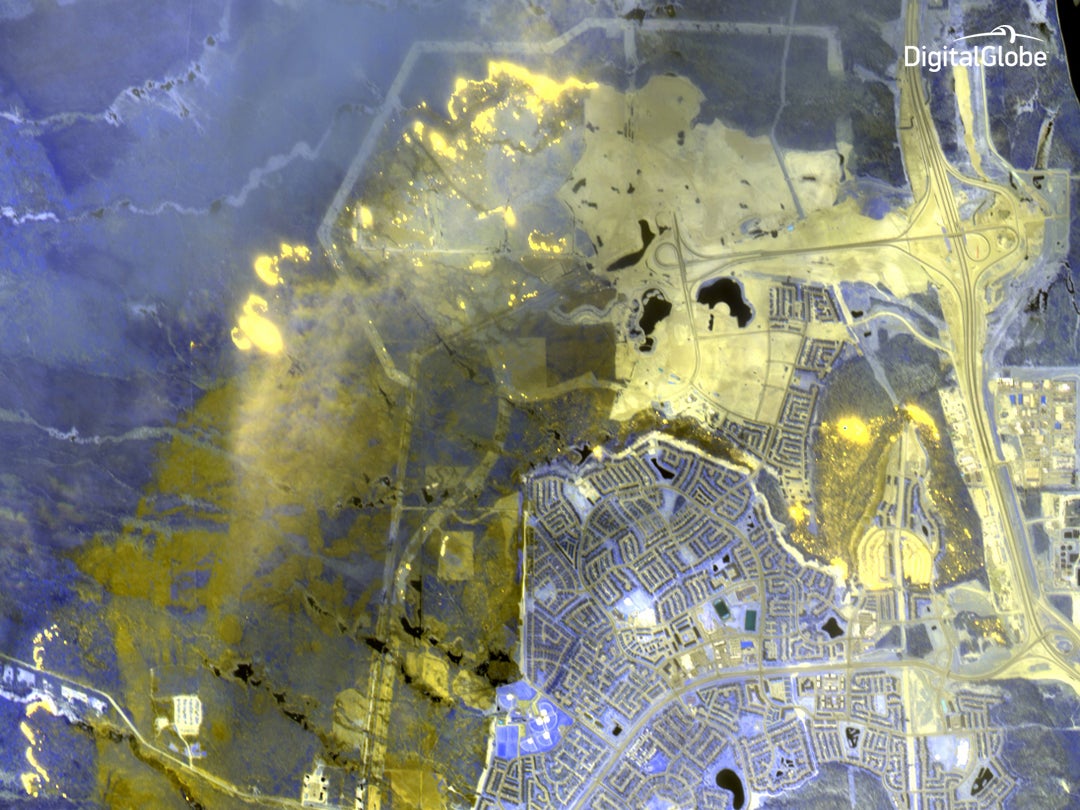 The WorldView-3 satellite captured this false-colour image of Ft McMurray during the fire. Yellow represents areas scorched by the fire, while purple areas represent healthy vegetation. The bright yellow spots are where the fires are actively burning. (Image: DigitalGlobe)

This satellite has the unique ability to peer through smoke using Shortwave Infrared (SWIR) technology to see where the fire is burning and how intensely it's burning. In these false-colour images, the yellow areas are those that have been burned by the fire, the purple areas are healthy vegetation and the bright yellow spots are where the fire is actively burning. 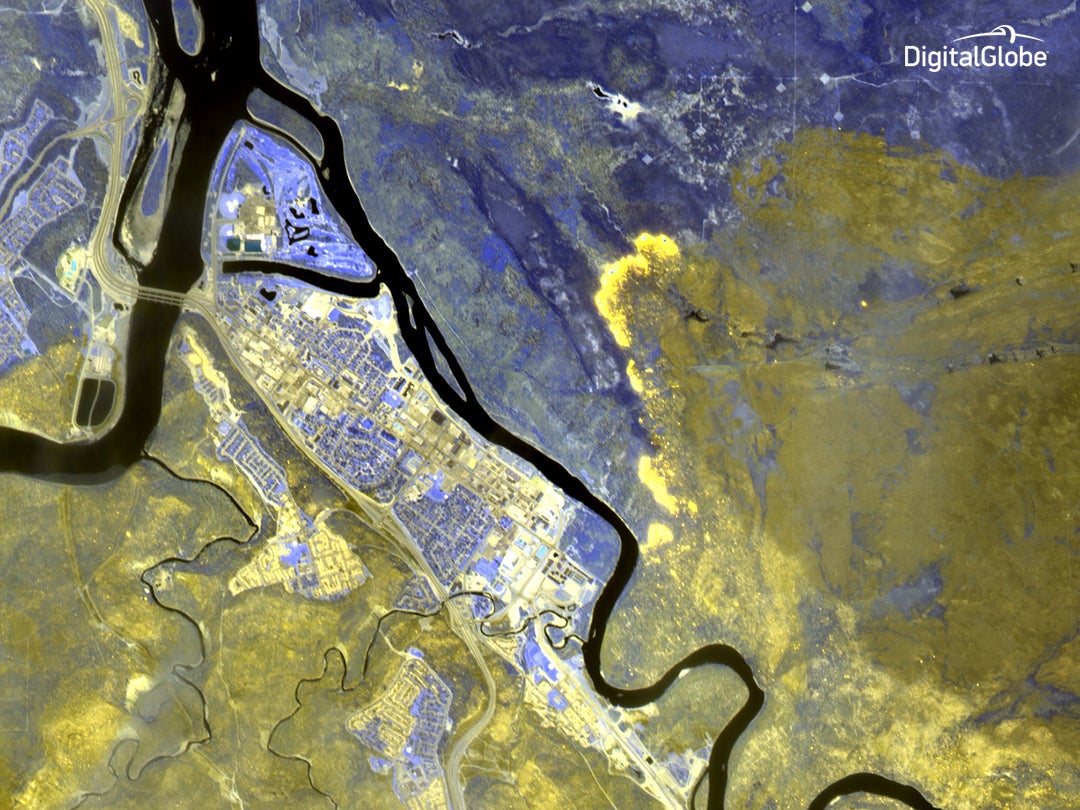 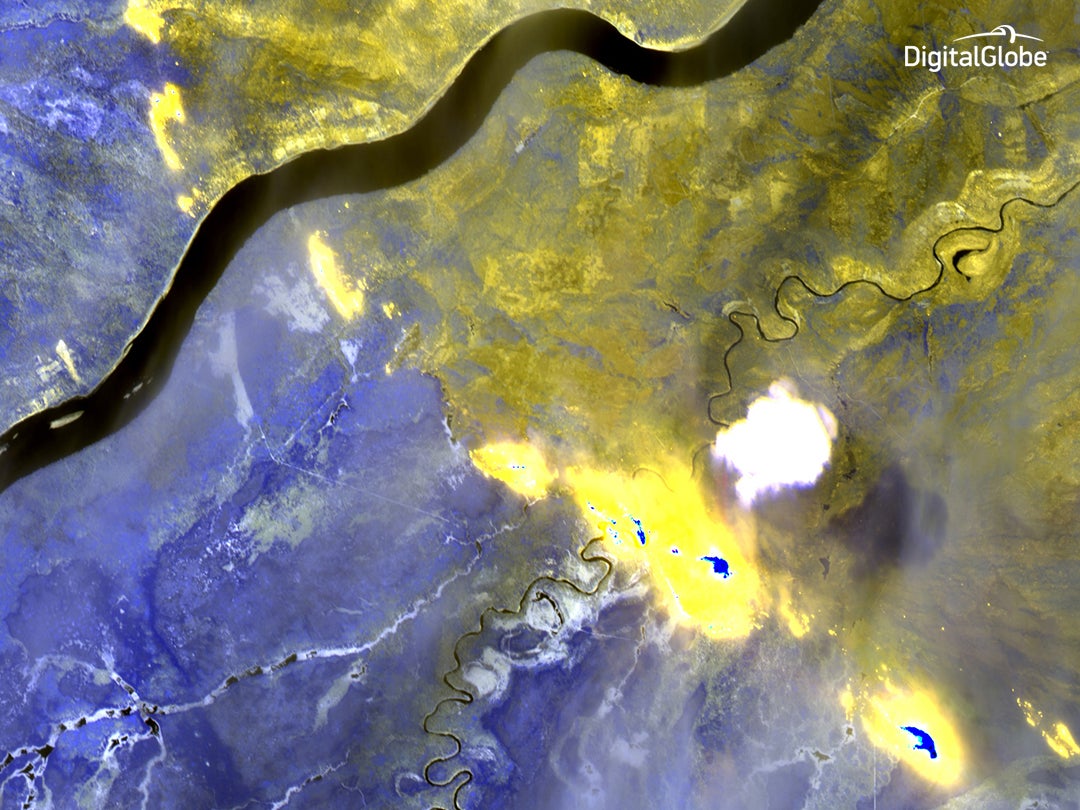 The bushfire continues to blaze in the northern forests of Alberta, and conditions remain extreme. A province-wide fire ban is in place. NASA has released several photos of the bushfire's smoke, which has drifted into the US, and seen as far as the Atlantic coast some 5000km away. 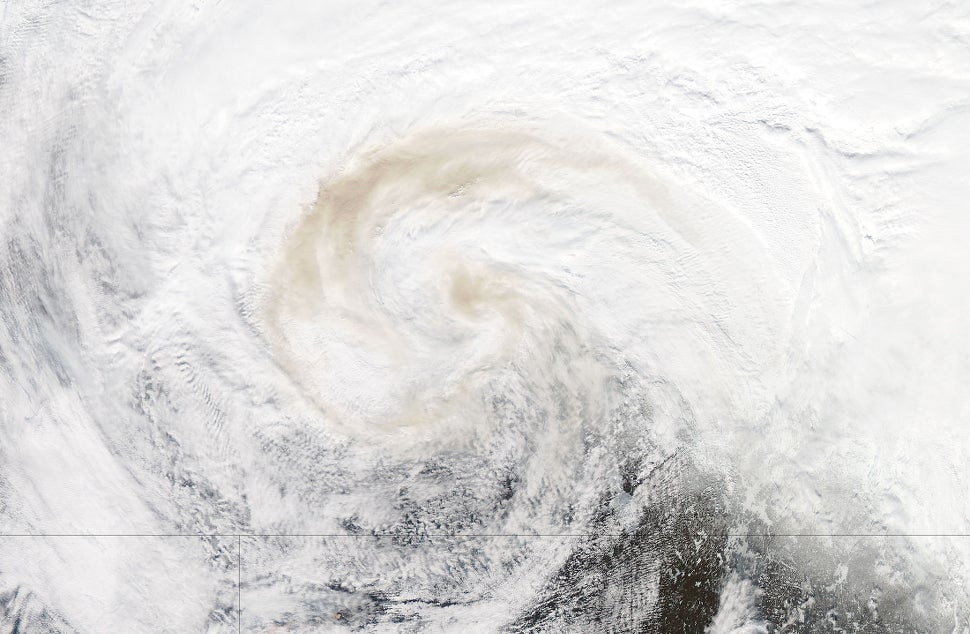 Smoke from the bushfires can be seen intertwined within regular clouds. This photo was taken by the Moderate Resolution Imaging Spectroradiometer (MODIS) instrument on the Aqua satellite on 9 May 2016. (Image: NASA image courtesy Jeff Schmaltz LANCE/EOSDIS MODIS Rapid Response Team, GSF 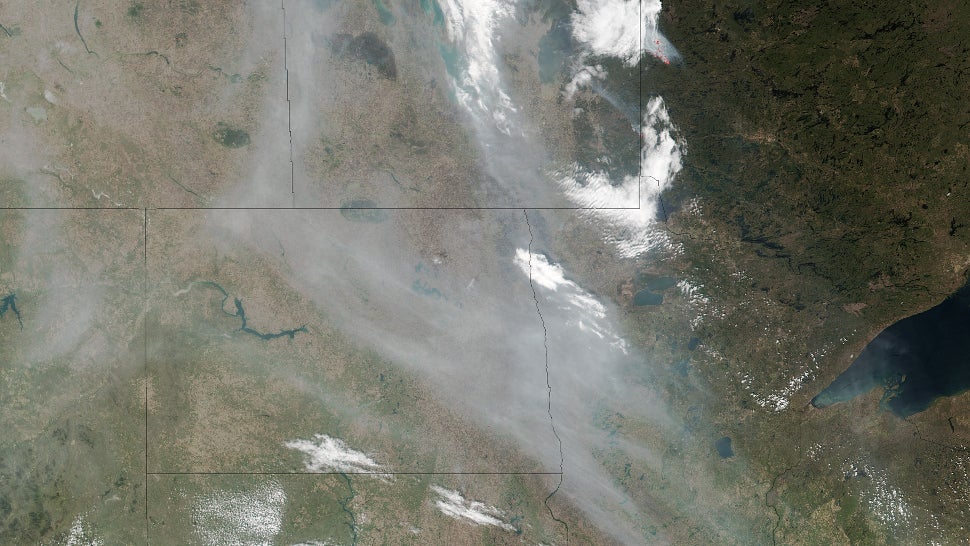 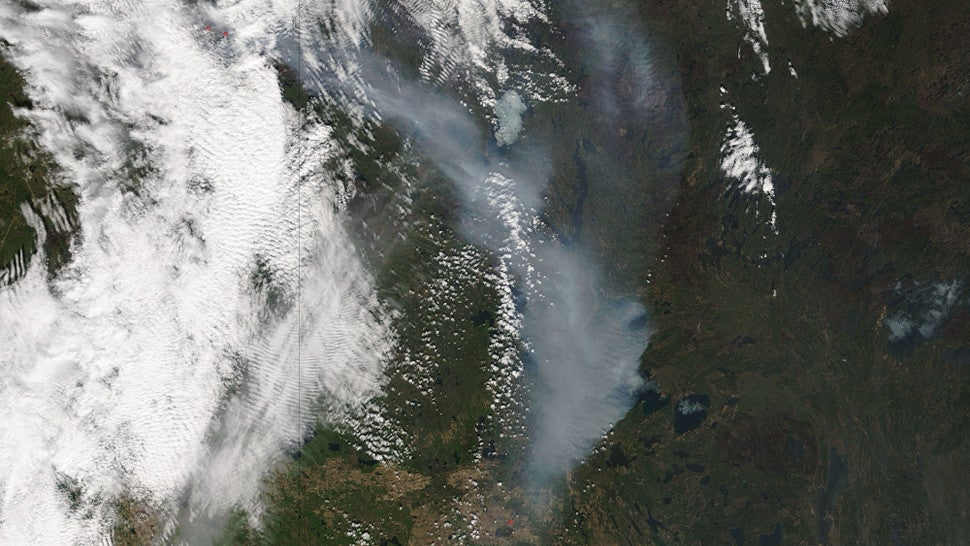 The MODIS instrument on the Terra satellite captured this image of the Fort McMurray fire on May 8 (Image: NASA Goddard MODIS Rapid Response Team)

As of Sunday May 8, there are more than 500 firefighters battling the blaze in the Fort McMurray region. They're being assisted by 15 helicopters, 14 air tankers and 88 other pieces of fire-fighting equipment. 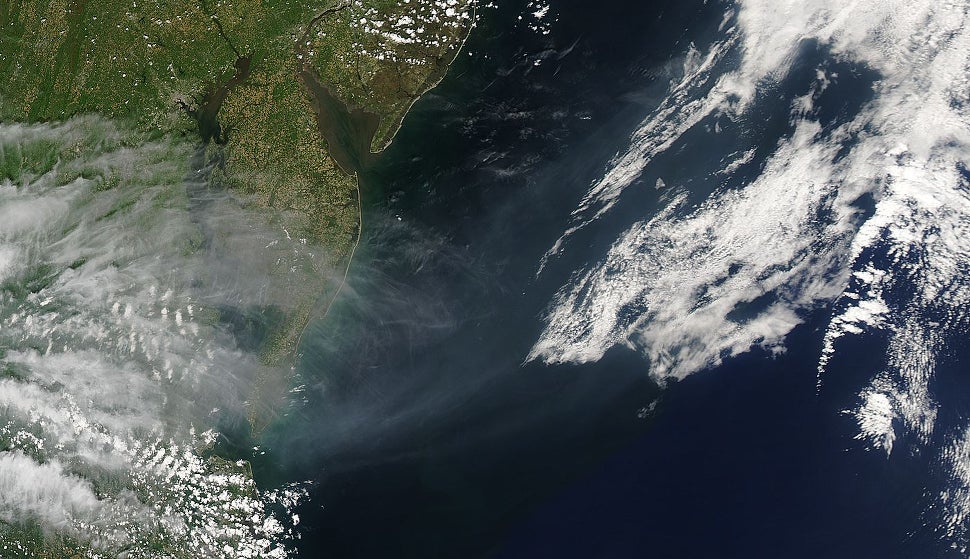 Smoke could be seen as far as the Atlantic ocean, some 5000km away (Image: NASA Goddard MODIS Rapid Response) 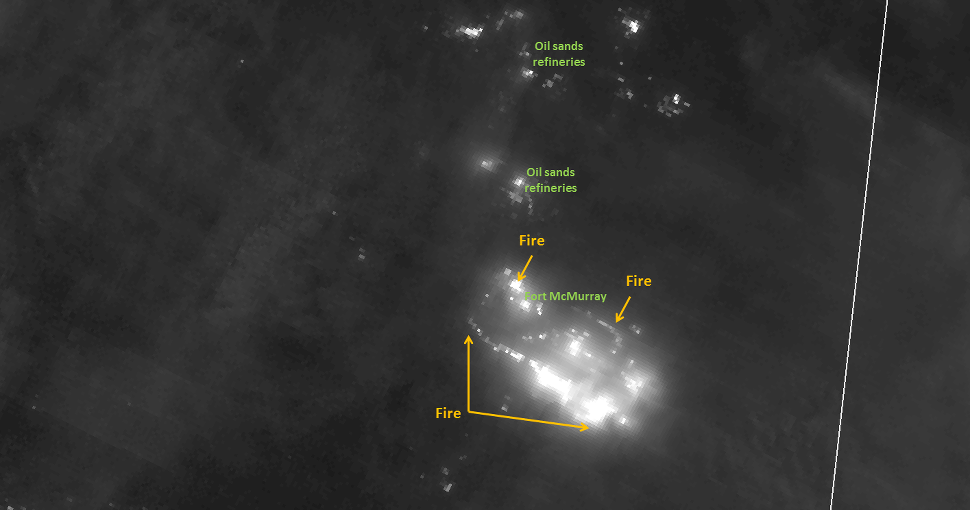 The fires as they appear in Fort McMurray during the night on May 5. (Image: NOAA/NASA CIMSS/SSEC)