Samsung thinks it has a possible solution to the problem of tiny, hard-to-read smartwatches: a projector. The company has filed a patent for a smartwatch that projects a larger screen onto the user's hand or forearm.

A projector smartwatch would work by using an image projector, a camera that captures the interactions with the projected screen and a processor that controls and connects the two. Sketches from the filing show menu image options being projected across the forearm and the back of the hand, using the larger space to write, or otherwise intact with the apps on the device. 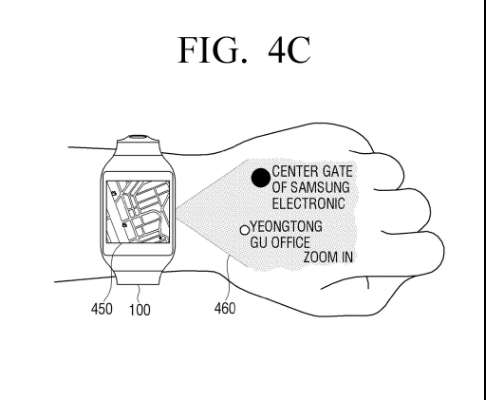 Though a patent filing doesn't mean that Samsung is actively developing this technology, the company is far from alone in being concerned about the functionality and size constraints of smartwatches. Most recently, the issue has some researchers arguing that a dual-screen smartwatch might be a good idea.

Screens on smartphones have continued getting bigger — as seen by the rise of the phablet — but watches are far more constrained when it comes to size. Not only are small screens frustrating to work with and often hard to see, they result in most smartwatches lacking some basic functionalities of a smartphone, such as having a keyboard to type on. (The Apple Watch, for example, only lets you respond to texts using dictation or with a list of pre-written "smart replies".)

The new technology, promising space to write and larger displays, could be necessary to convince consumers that smartwatches are more than a crippled version of the smartphone.

This could go beyond smart watches: its patent also covers headsets and VR devices. In one sketch, a user wears a headset that has been programmed to recognise the shape of a fridge and television and then can use those spaces, too, as areas onto which to project screens.