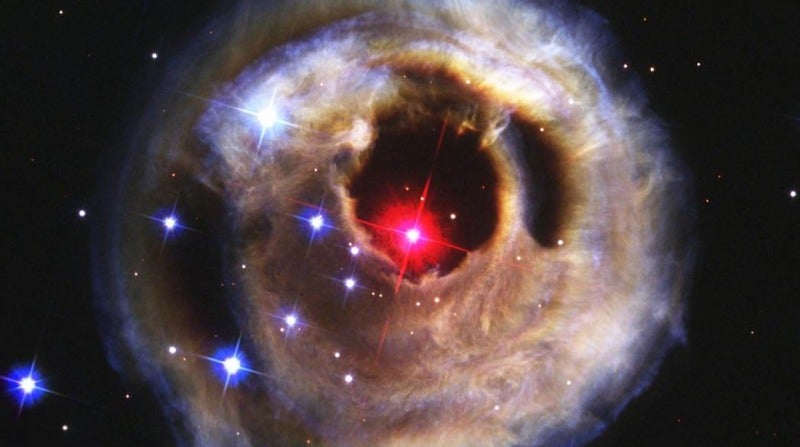 Chances are you've never heard of Allan Sandage, but the late astronomer was a major figure in 20th century astronomy, particularly known for his work on how stars evolve. Late in life, he discovered two other scientists had beaten him to that breakthrough, but died before he could finish investigating. His posthumous paper correcting the historical record has just appeared in the Publications of the Astronomical Society of the Pacific. Supergiant star V838 Monocerotis. Image: NASA, ESA and The Hubble Heritage Team (STScI/AURA)

Since the early 1900s, astronomers had plotted each star within a cluster according to their colour versus their brightness. But they didn't know how stars along different branches in this plot related to each other.

Stars in globular clusters can be arranged according to their ages. The more massive the star, the more quickly and brightly it burns. So main sequence stars have longer lives than, say, red giants. Standage demonstrated that subgiant stars serve as an intermediary between the two, and the branching pattern observed in star clusters were thus part of a star's natural evolution. 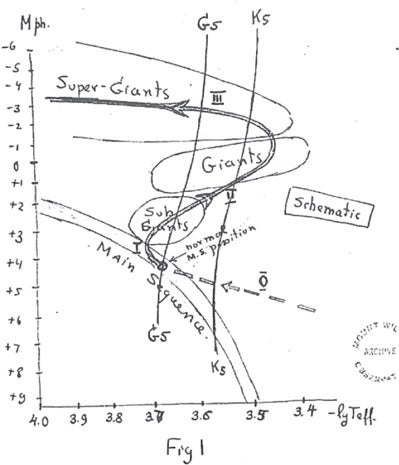 George Gamow's 1944 sketch of stellar evolution. Image courtesy of the Observatories of the Carnegie Institution for Science Collection at the Huntington Library.

But in the early 2000s, Standage discovered he may have been scooped on that discovery by a good 10 years. While combing through the archives of the Mount Wilson Observatory, he came across an unpublished exchange of letters between physicist George Gamow and Walter Adams in 1944. Gamow's letter included a crude hand-drawn figure (left) illustrating the same pattern of stellar evolution outlined by Standage in the 1950s.

Gamow and Adams had arrived at their insight based on a catalogue of more than 4000 stellar classifications and distances, prepared over the course of 20 years at Mount Wilson Observatory. Included were 90 sub giants. But most astronomers paid little attention to the catalogue, considering it too biased to be reliable data on which to base any findings. So Gamow's insight never led to any academic paper.

Intrigued, Standage teamed up with a former postdoc, Steven Majewski (now at the University of Virginia), and Majewski's student, Rachael Beaton (now a postdoc at Carnegie Institution) to find out more. They spent years delving into the historical records from 1935 to the present day, comparing the 1930s measurements of all 90 subgiants to modern-day records.

Standage was diagnosed with pancreatic cancer, yet still worked feverishly on the project right until he died in 2010. Majewski and Beaton received his last handwritten comments two days later. And they doggedly continued the work in his honour.

Ultimately, they found that the criticisms of the 1935 catalogue were unfounded, at least with regard to the subgiant stars. The measurements were precisely accurate. "If this very real discovery of sub giants had been recognised at the time, we could have increased the speed at which stellar evolutionary theory was developed," Beaton said in a statement.

Standage is listed as first author on the new paper, at their insistence. As Beaton and Majewski wrote in their afterword::

[Standage] is rightfully maintained as the primary author in that he was the originator and true leader of the project, but most especially to recognise his enthusiasm to rectify the historical judgment of the A35 work and to uphold the reputation of the Mount Wilson spectroscopists.