Frightening Composite Photos Retell The Terror Of The London Blitz 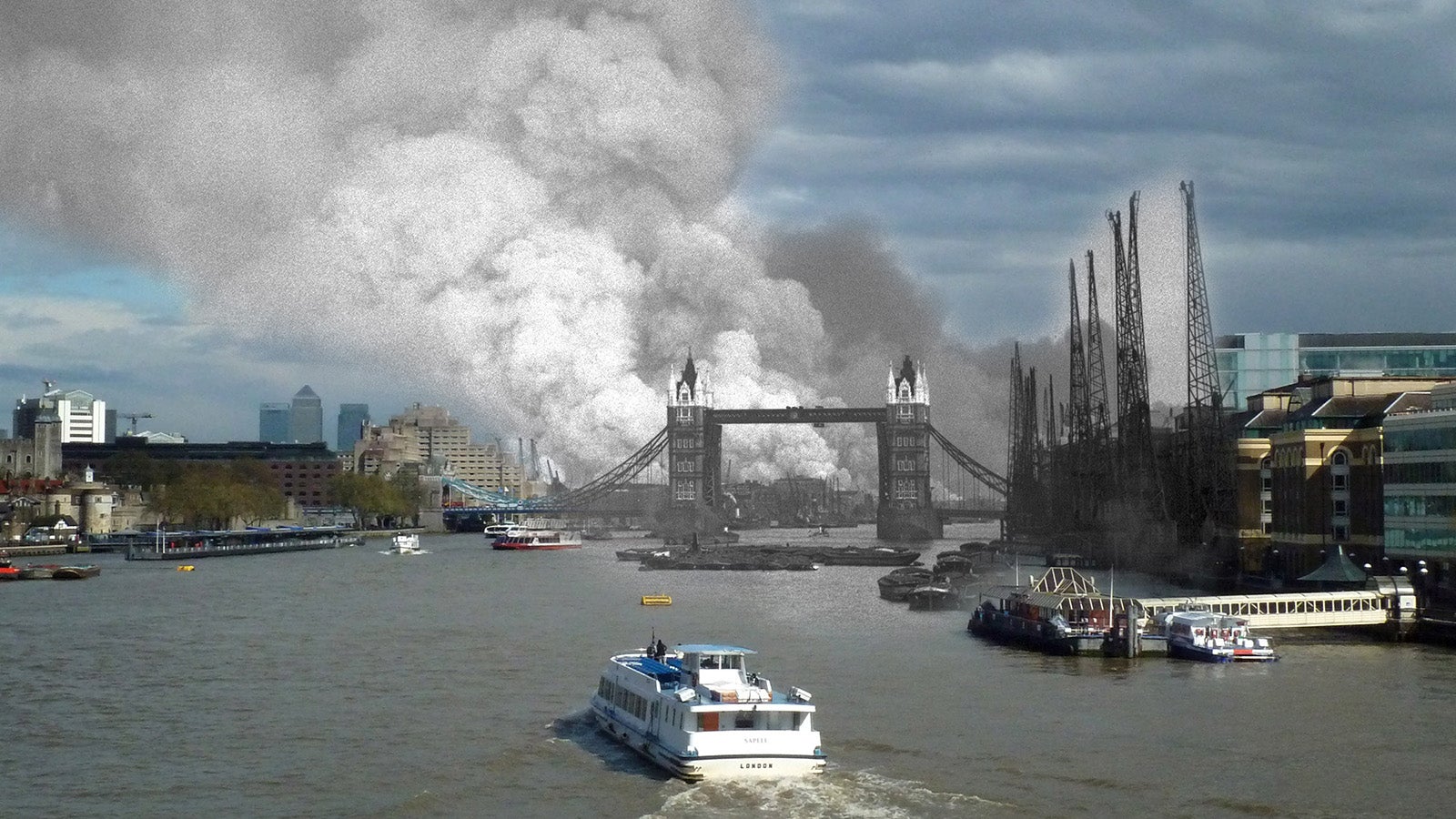 One of the main reasons why the Nazi Germany finally lost World War II was Hitler's failed strategic bombing campaign of the United Kingdom. The Blitz lasted for eight months from September 1940 to May 1941, and the Luftwaffe bombers attacked 16 British cities. Over a period of 267 days, London was attacked 71 times, including 57 consecutive nights of raids on the capital. Top: A view east down the Thames towards smoke rising from fires at the Surrey docks following the first German air raid. (Image: Keystone/Hulton Archive/Getty Images+Jim Dyson/Getty Images)

The fortitude and defiance of British citizens helped the Royal Air Force to fend off Hitler's offensive during the early stages of the war. The last major attack on London began on the evening of Saturday 10 May 1941, known as "The Longest Night". Luftwaffe bombers made 571 flight attacks and dropped 800 tonnes of bombs, killing 1436 people.

The Blitz ultimately killed over 20,000 people in London and left another 1.5 million homeless. The destruction also changed the capital's landscape more than at any time since the Great Fire of 1666. The following set of digital composite images make a tragic yet heroic comparison between scenes of London in 1940 and 1941 and present day to mark the 75th anniversary of the end of the Blitz in London on 11 May 2016. 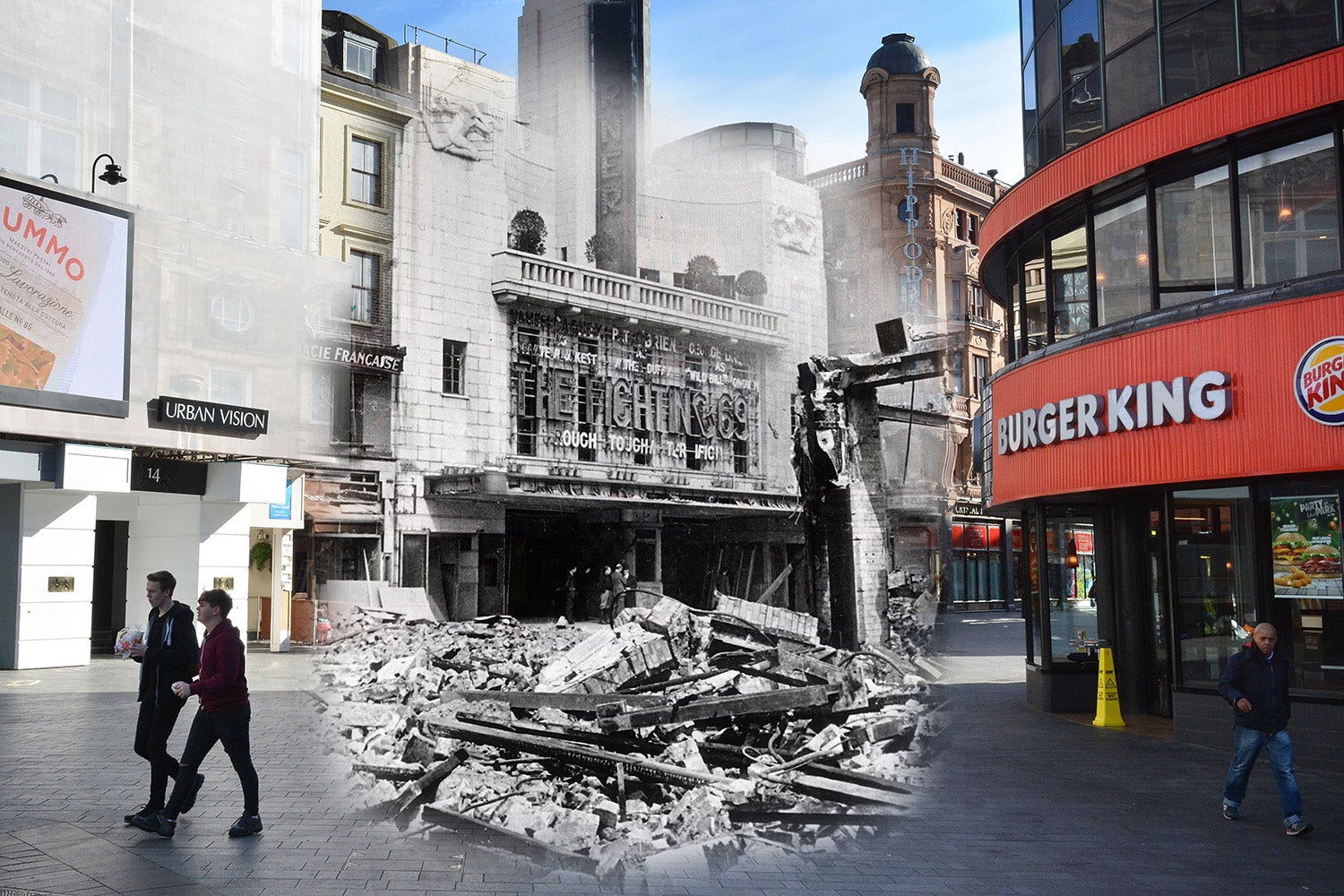 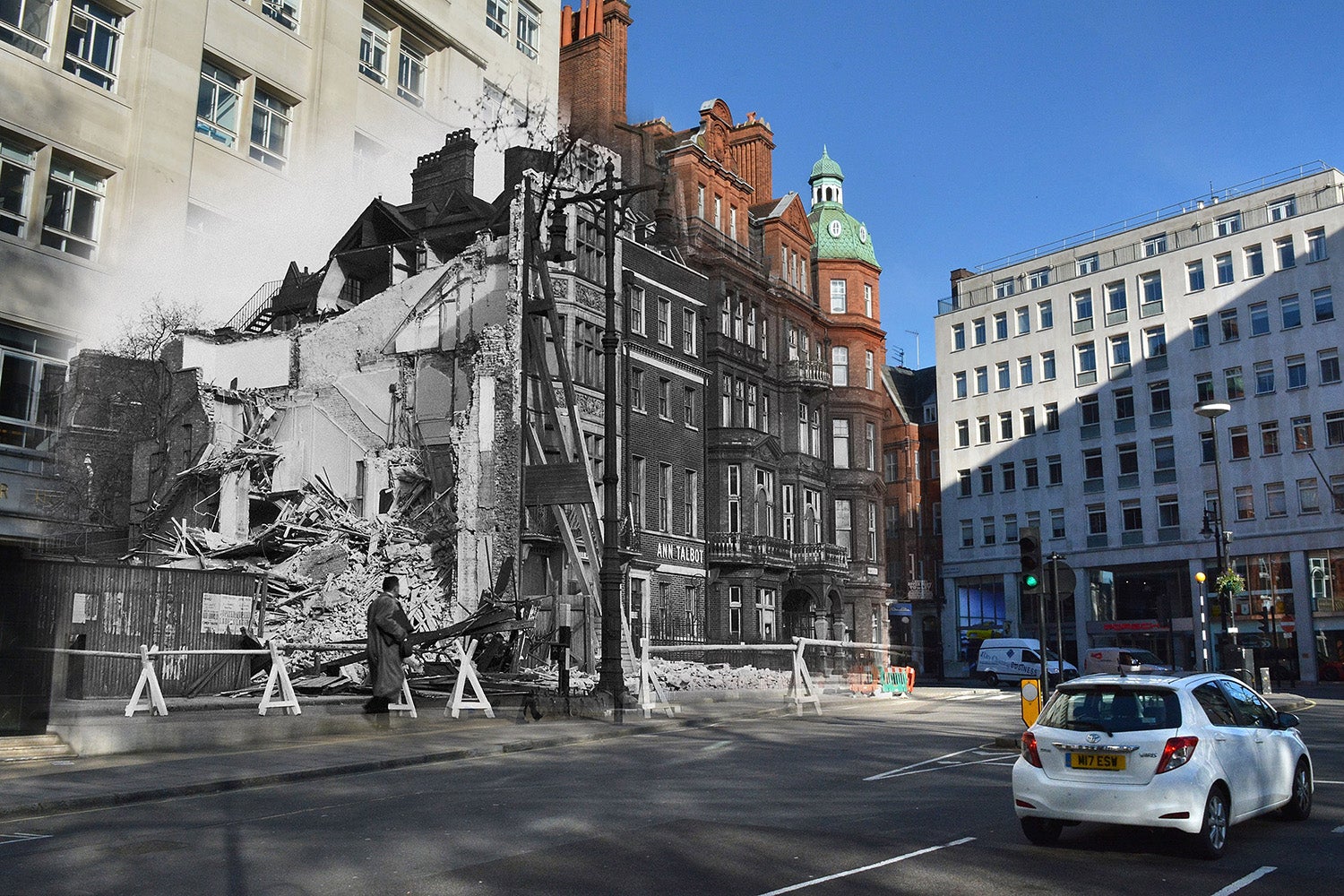 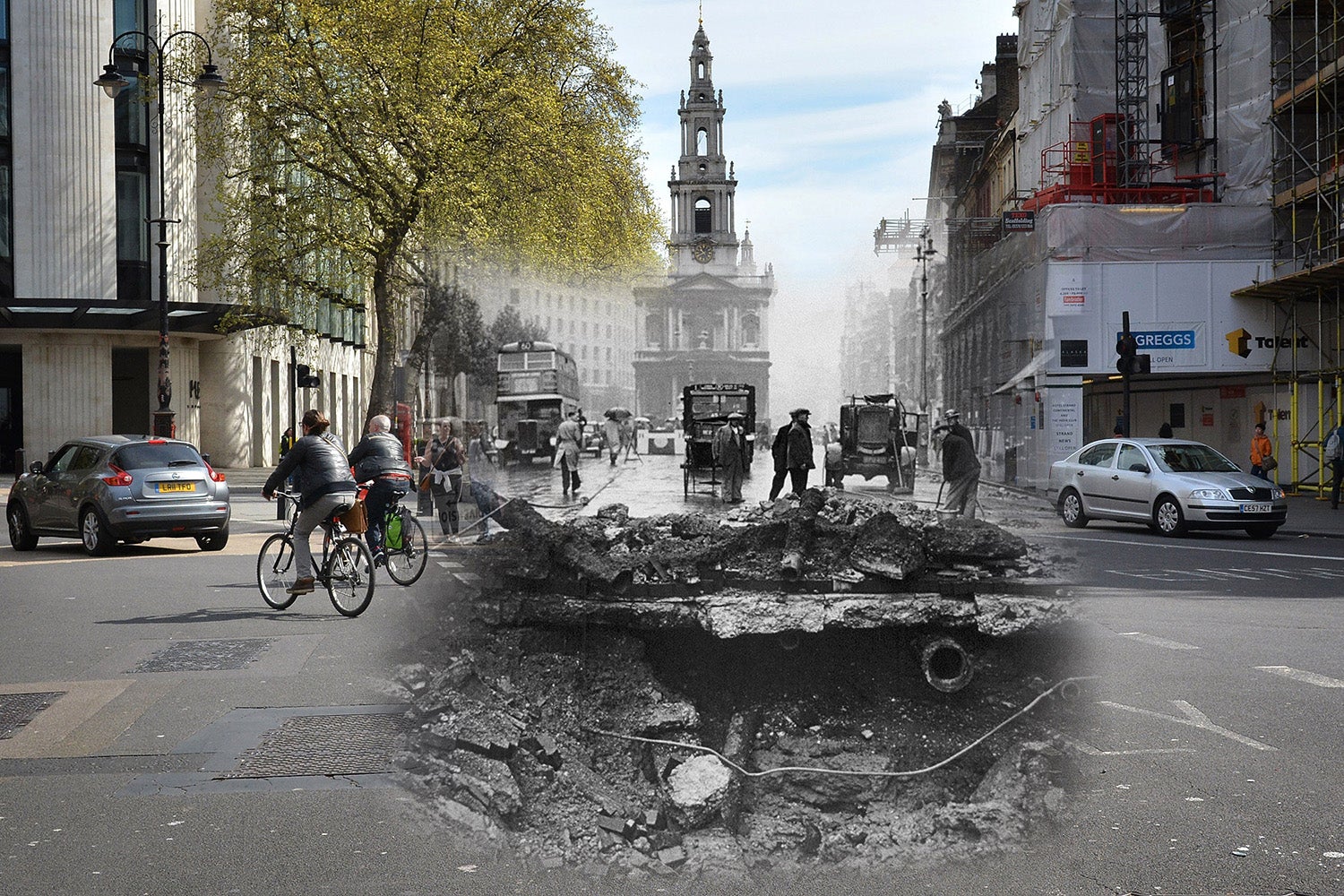 1940: A huge hole in the Strand, where a bomb fell during an air raid over central London. It fell near the Gaiety Theatre, and the church of St. Mary-le-Strand can be seen in the background. (Image: Central Press/Getty Images+Jim Dyson/Getty Images) 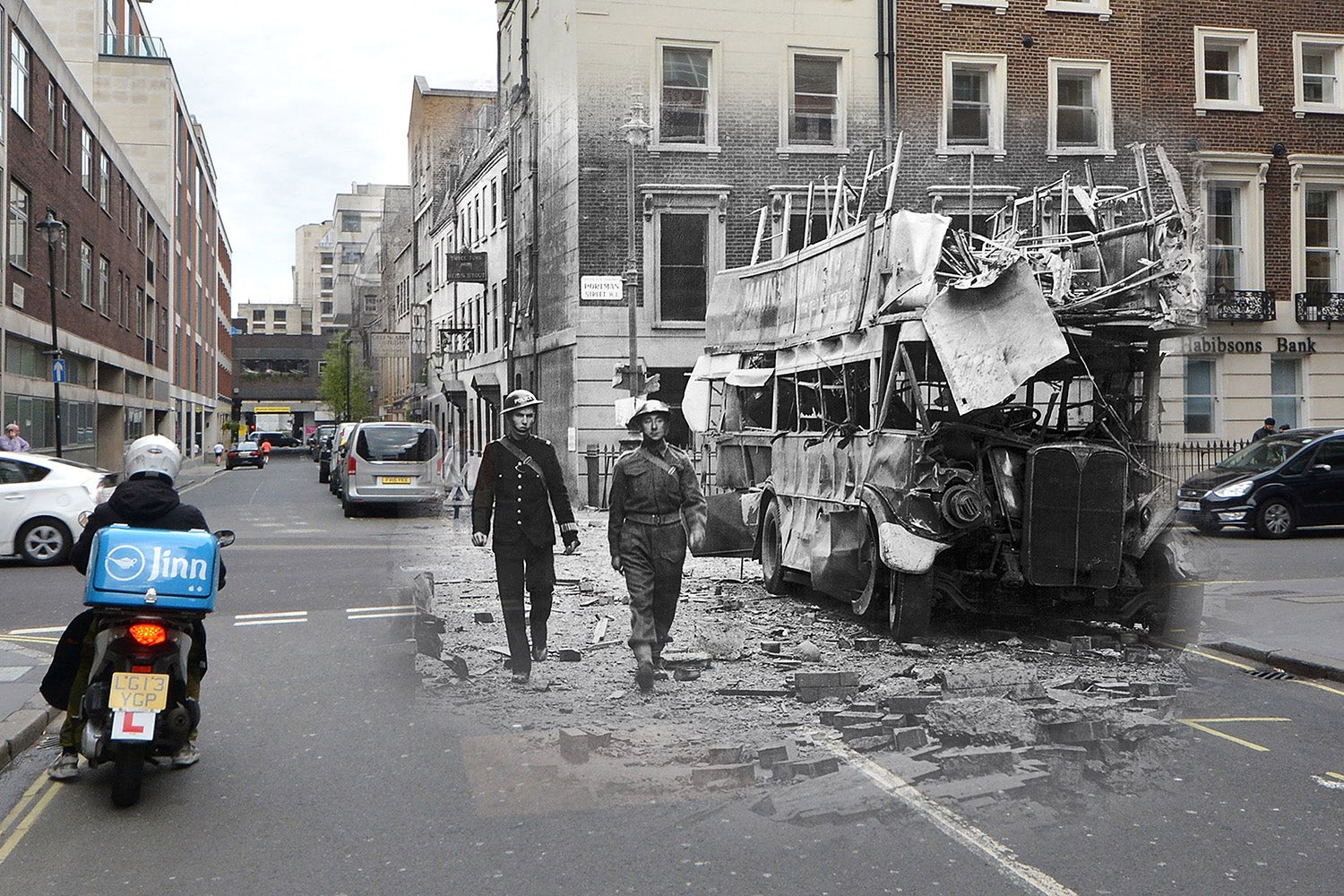 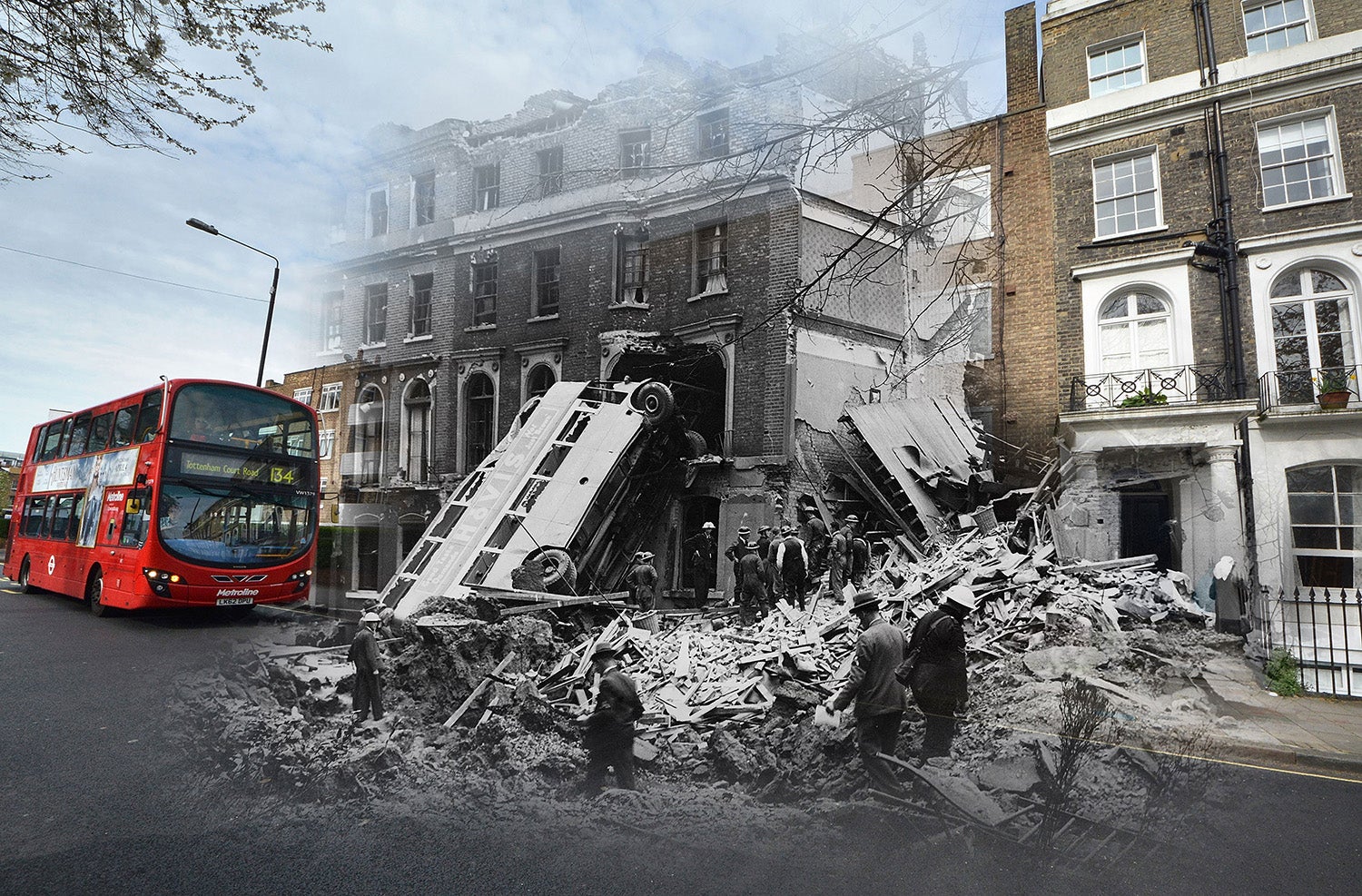 9 September 1940: A bus is left leaning against the side of a terrace in Harrington Square during the aftermath of a German bombing raid on London in the first days of the Blitz. The bus was empty at the time, but eleven people were killed in the houses. (Image: H. F. Davis/Topical Press Agency/Hulton Archive/Getty Image+Jim Dyson/Getty Images) 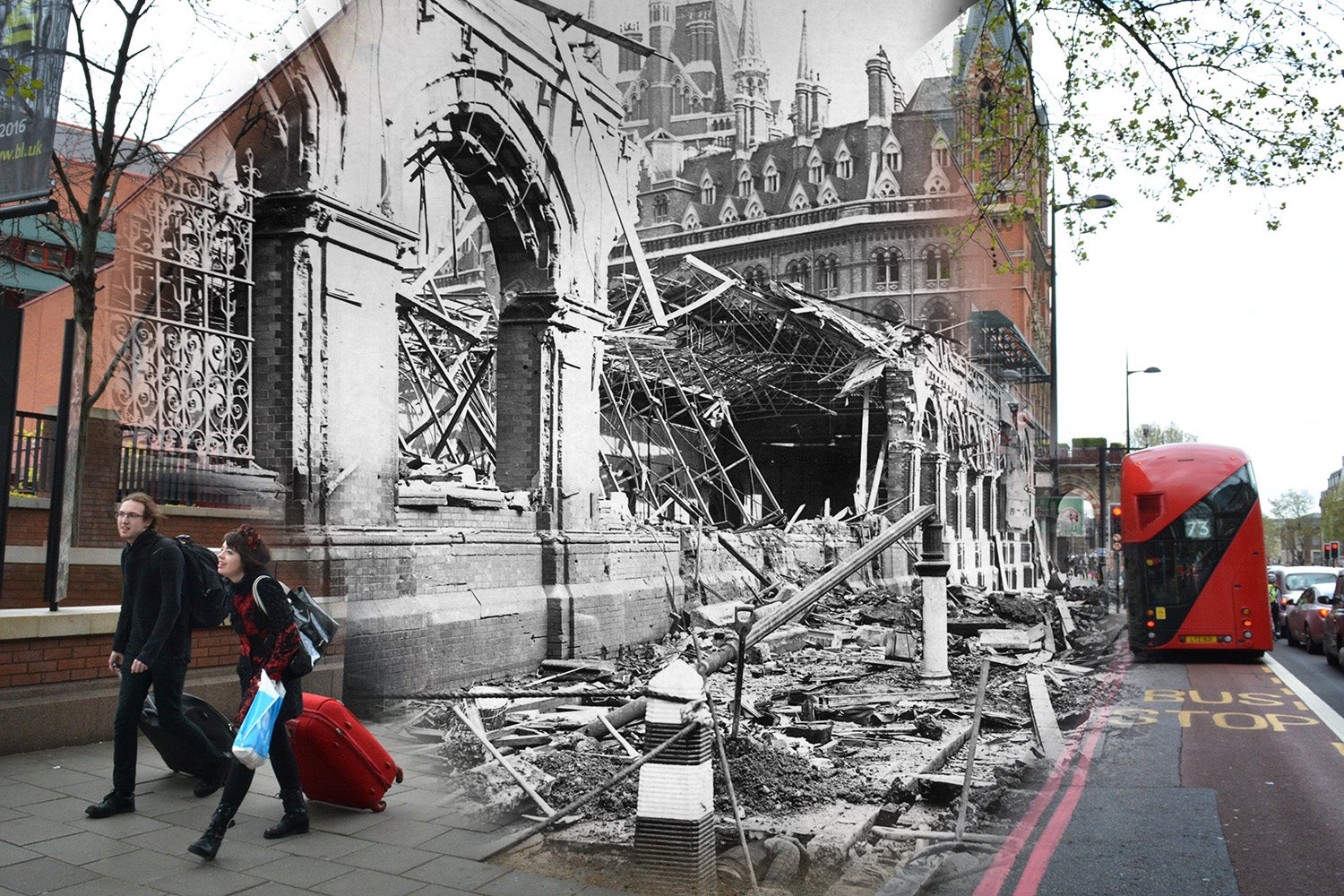 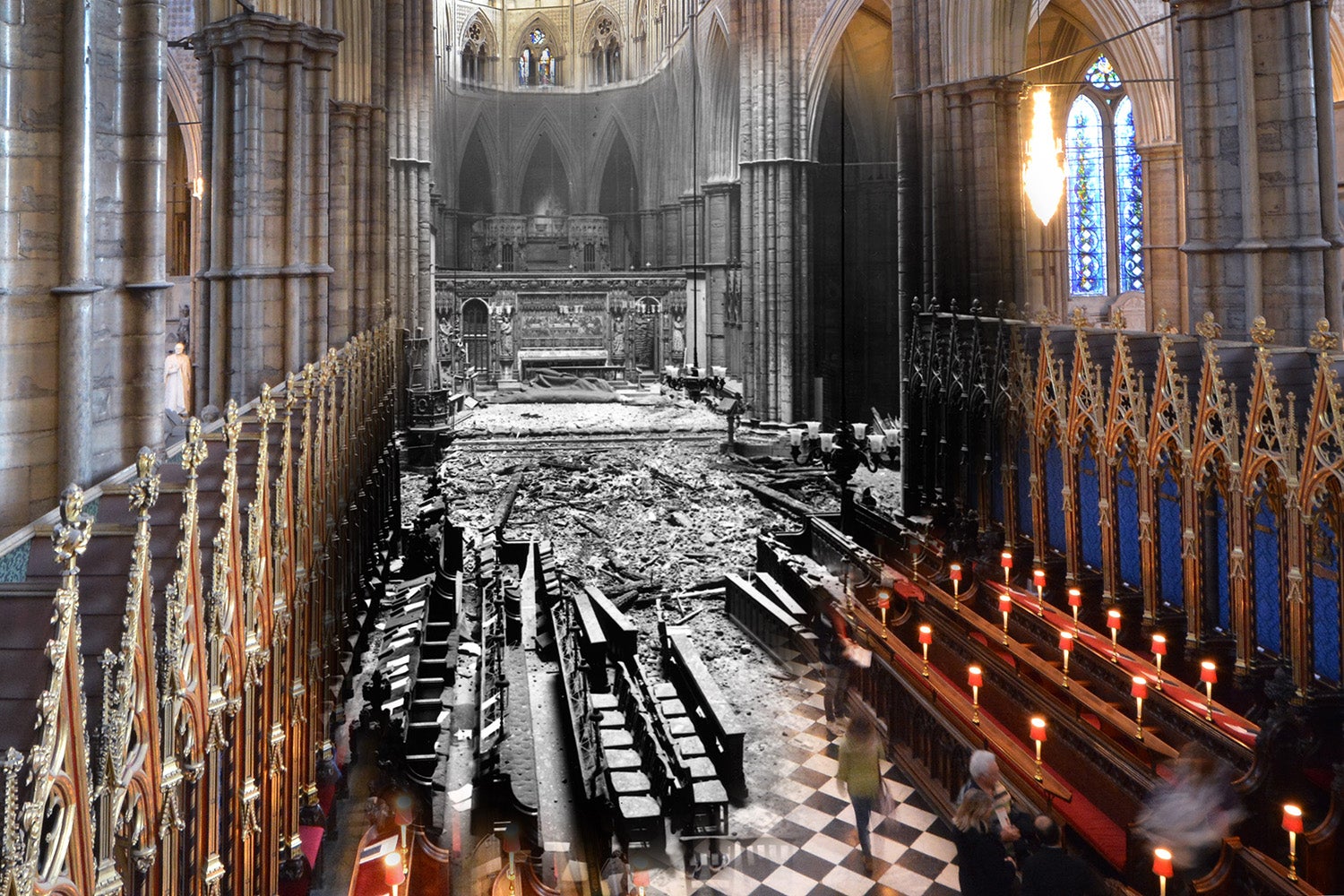 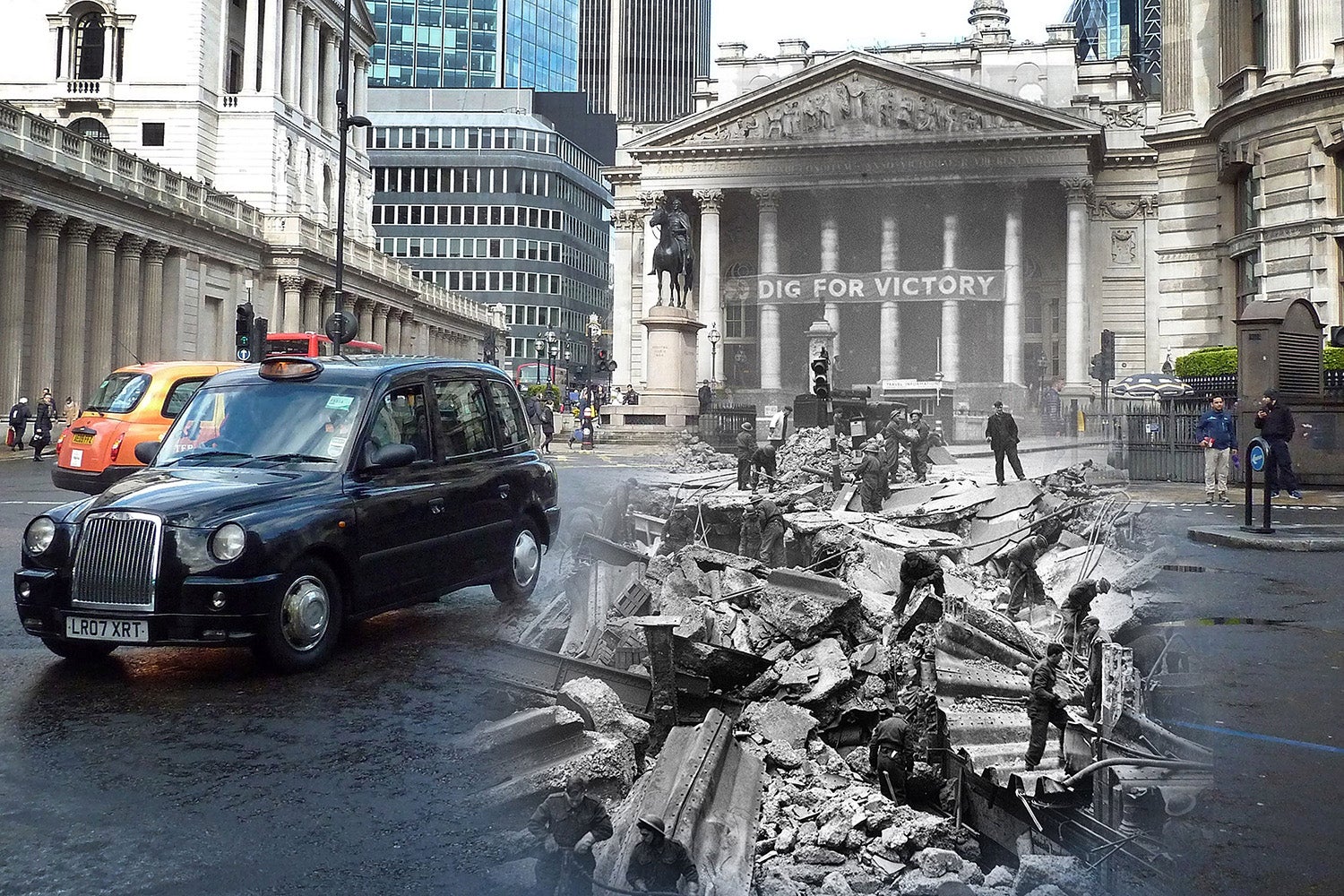 Soldiers help to clear the debris of Bank Underground Station in front of The Royal Exchange o the morning after receiving a direct hit during the Blitz. The slogan 'Dig For Victory' adorns the Exchange. (Image: H F Davis/Getty Images+Jim Dyson/Getty Images) 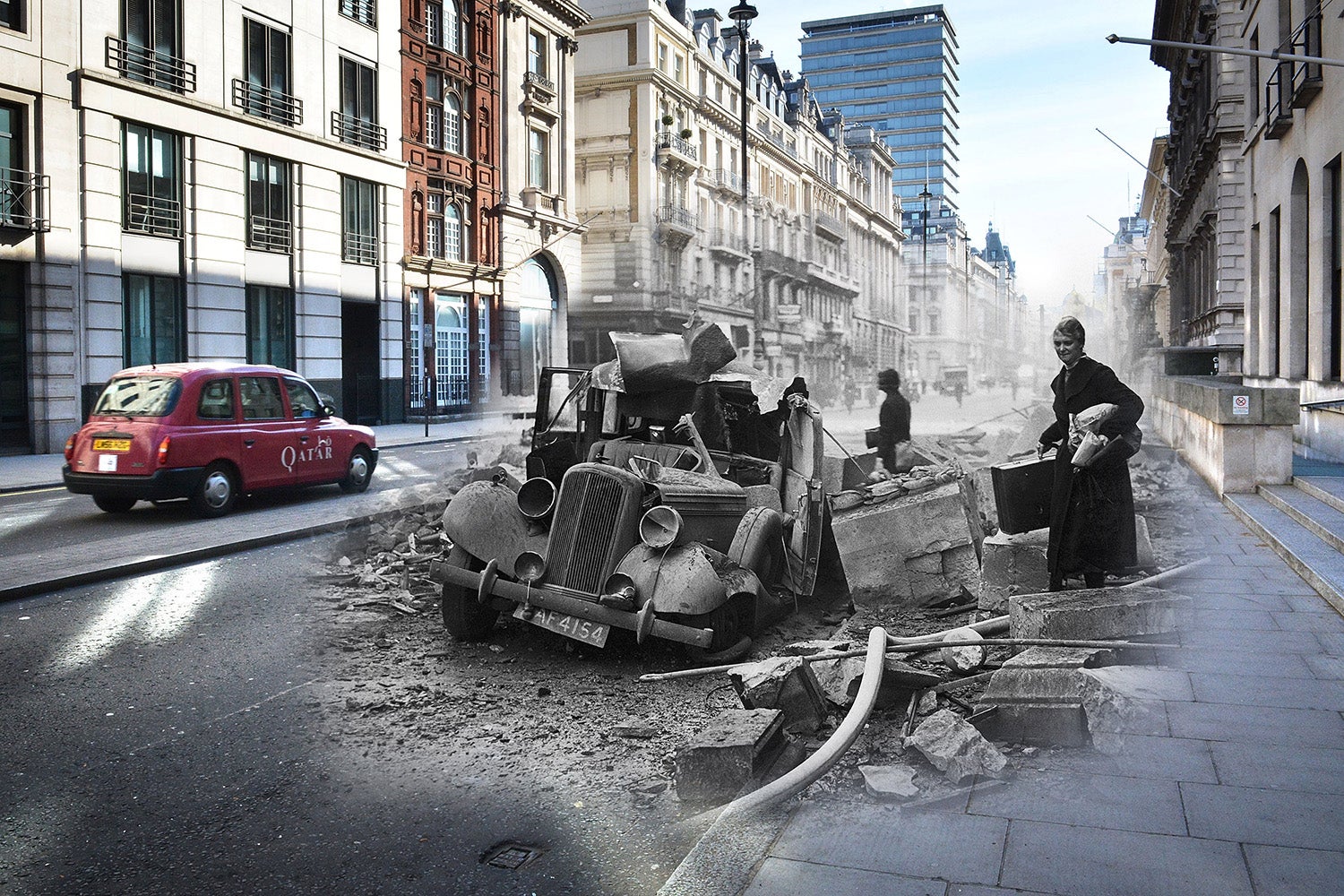 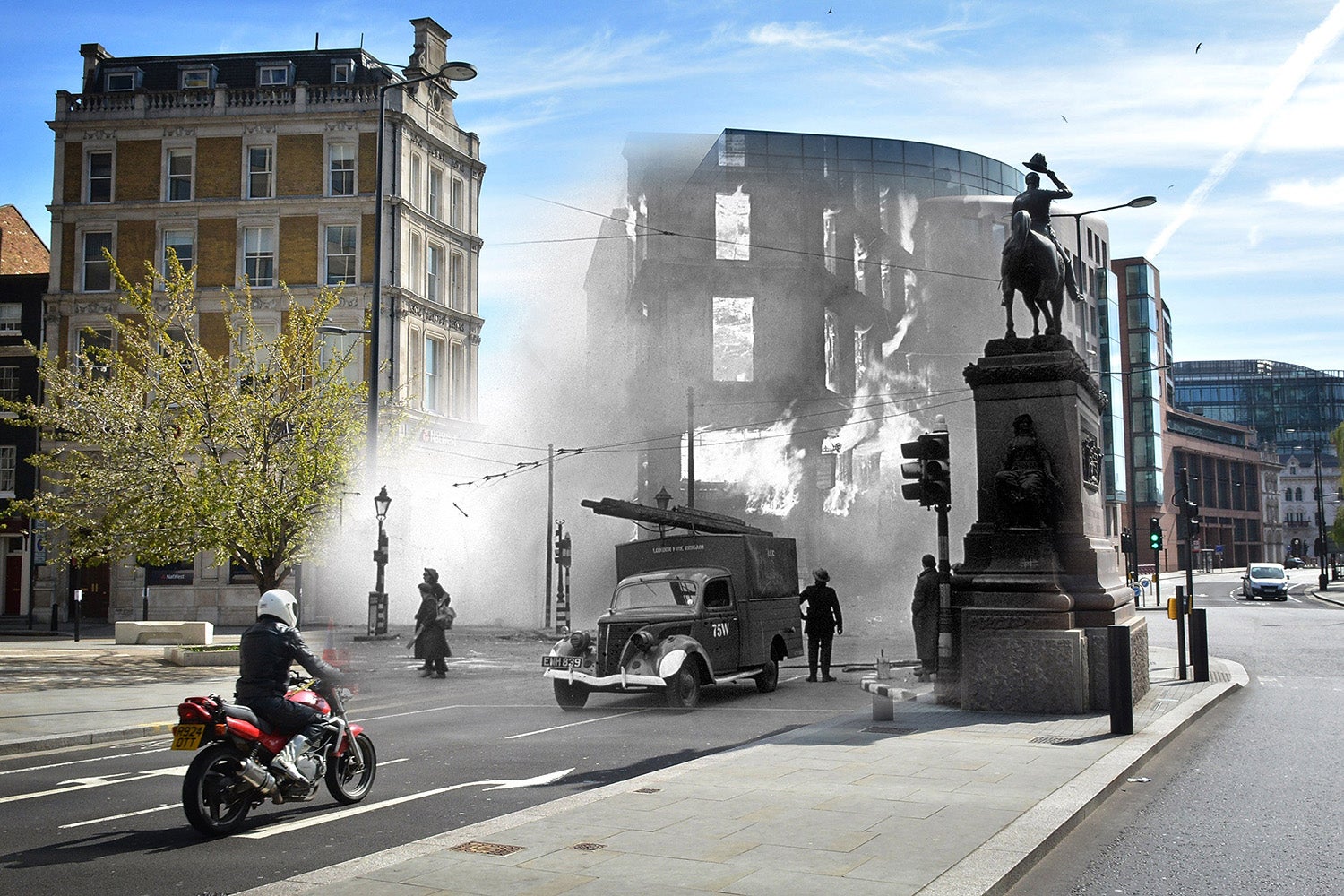 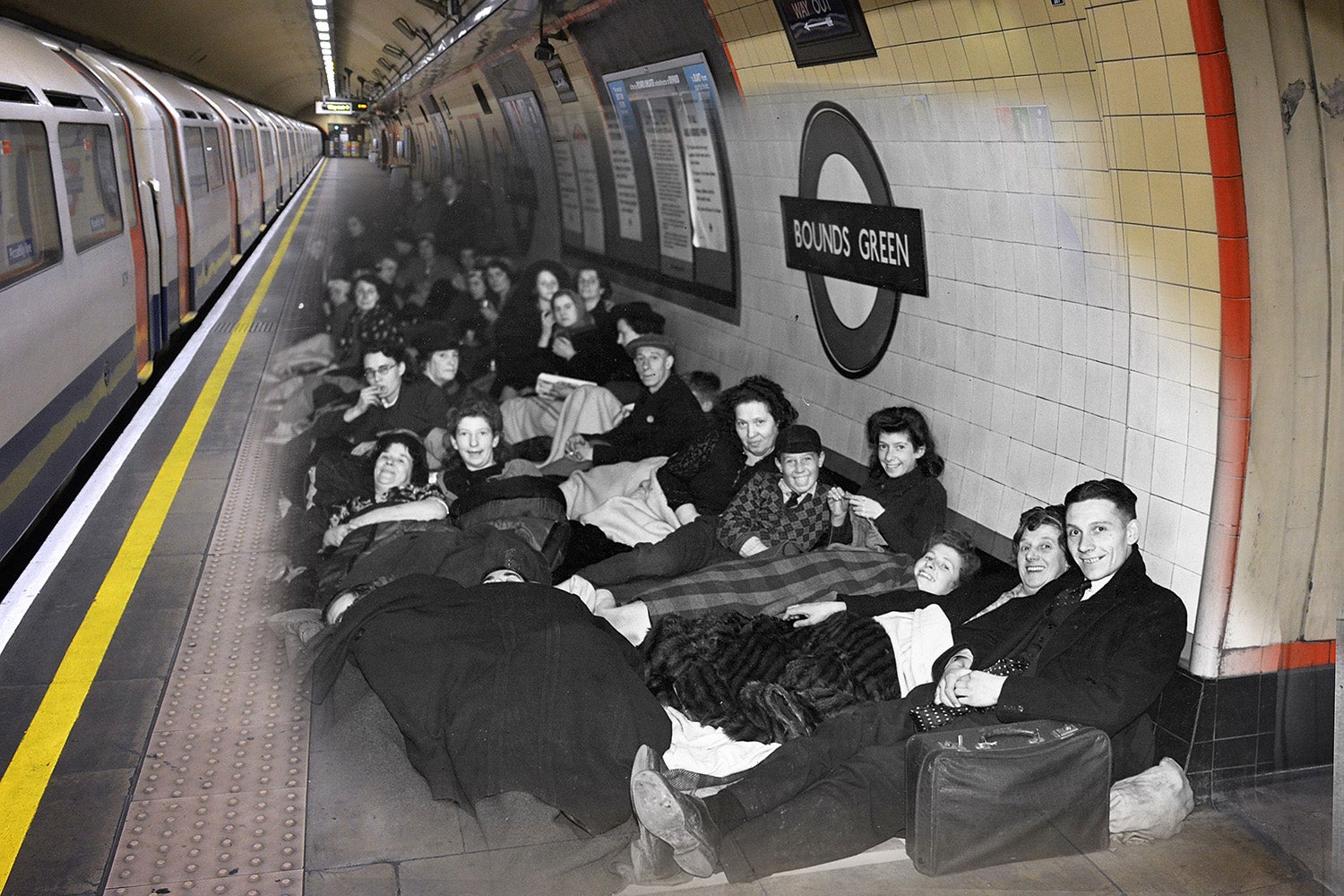 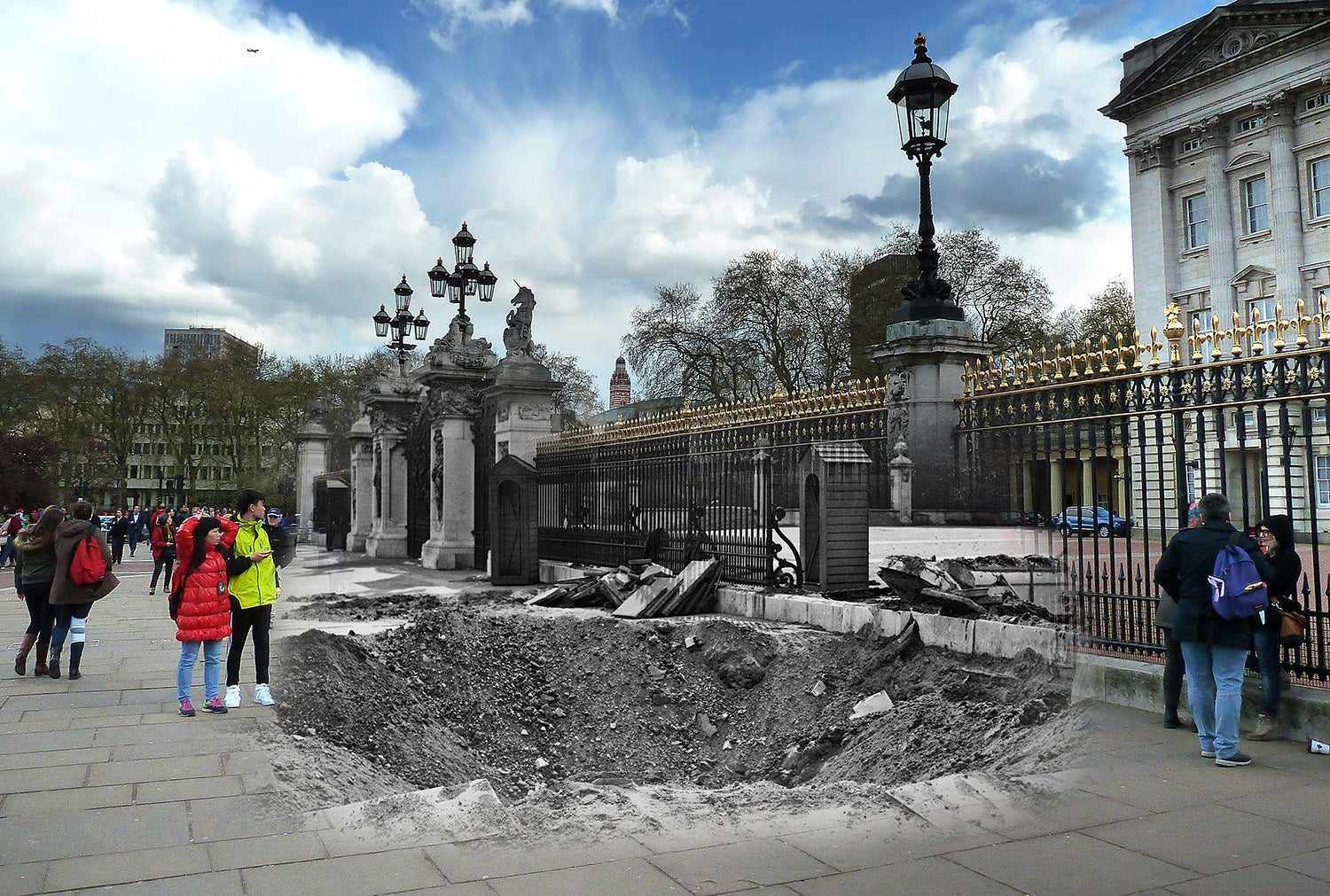