Angry Birds Is Over 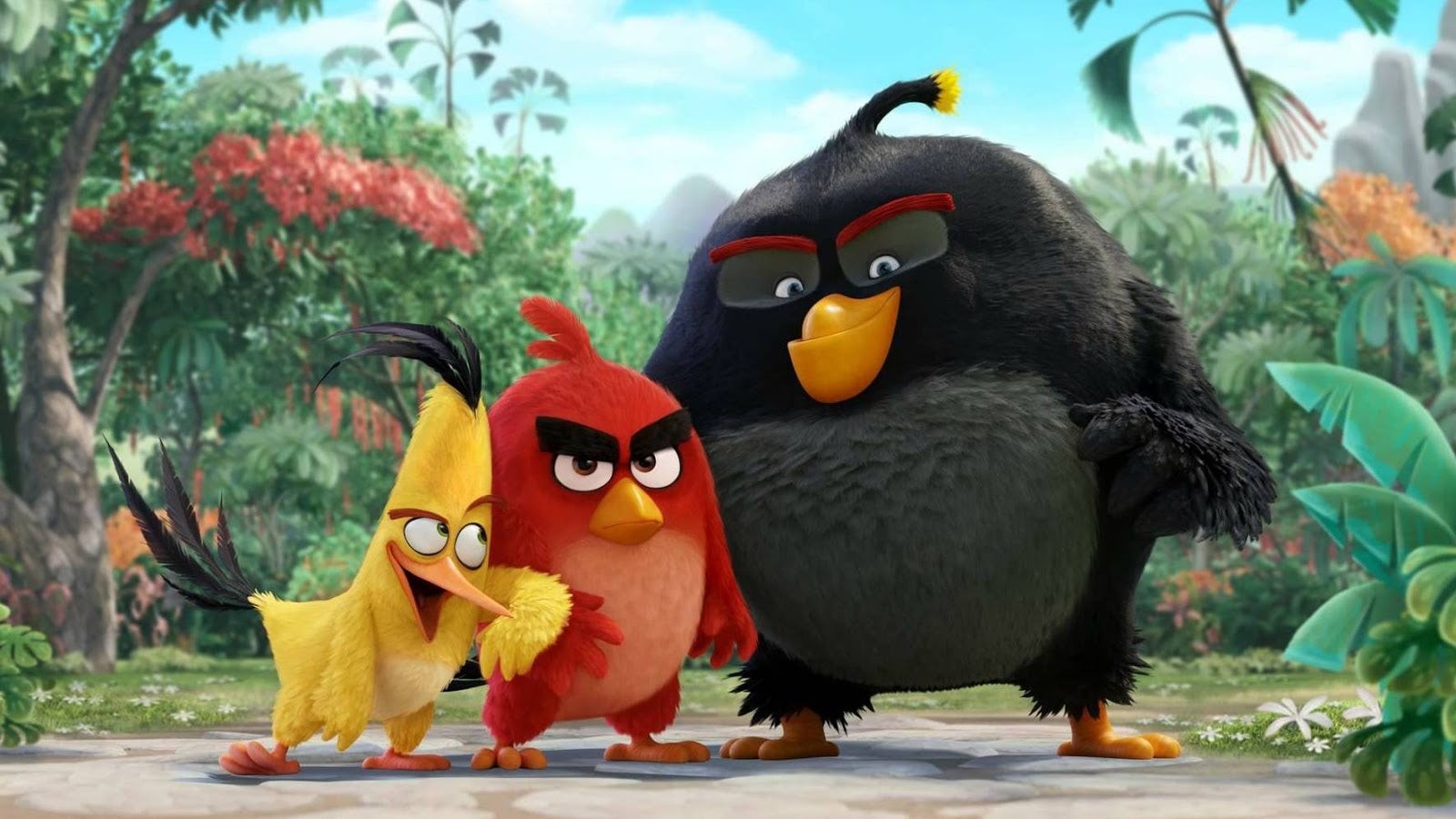 The biggest comedic moment in The Angry Birds Movie happens when two characters find out the giant lake they have been swimming in is a massive pool of Mighty Eagle's urine. They were spitting the water in each other's mouths before that. Surely, The Angry Birds Movie only exists because of deep-seated insecurity. Here's how it probably went four years ago: the people at Rovio who made the once-ubiquitous mobile game kept shovelling money into their vaults, looked around and said, "hey, our Intellectual Property (™) is as good as anybody else's. We deserve a movie!" The smell of all that money wafted over to decision-makers at Sony who then replied, "Yep, it probably is. We will help you." But Angry Birds is on life support and the only purpose this limp movie adaptation can serve is to be a memorial to blind hubris.

T-shirts, toys, comics and a ton of ancillary merch were everywhere but, for a few years there, it seemed like Angry Birds would be more than just a passing fad. The games being produced by the Finnish development studio were getting incrementally better, even if there were too many of them coming out too fast. Running counter to expectations, entries tethered to iconic brands like Star Wars and Transformers showed demonstrative improvements that made the architecture-destruction template more fun. None of that could stop Rovio from being a one-note company, though. Their efforts to do something other than Angry Birds were too feeble and attempts to evolve and iterate on their own golden goose hobbled both the franchise and the company. Now comes a movie that is the last shovelful of dirt atop the cultural phenomenon's grave.

When the project was announced after years of rumours, it all seemed like things would be different for The Angry Birds Movie. The company was so flush that most of the $US73 million ($101 million) production overhead for The Angry Birds Movie came from Rovio itself. That just means most of the blame for the incredible awfulness of the film rests on the company's shoulders, too.

This is a film full of established, expensive comedy all-stars like Keegan-Michael Key, Maya Rudolph, Bill Hader and Hannibal Burress. Jason Sudekis voices Red, the grumpy lead character who self-destructs all over a customer's face after screwing up a birthday cake delivery while dressed up as a clown. Red gets sentenced to anger management, the roughest penalty available on the idyllic paradise of Bird Island, populated by indefatigably cheerful flightless avians.

The initial scenes at the Infinity Acceptance Group are a harbinger of just how rote and unoriginal the movie will be. It's run by a touchy-feely hippie instructor who uses poetry, yoga and sharing exercises to improve the clients sent her way. The three other birds in anger management are Chuck, a yellow bird with superspeed (Josh Gad); explosive Bomb (Danny McBride) and grumbly, near-mute giant Terence (Sean Penn). Chuck and Bomb try to pal around with Red after they meet in group but the surly bird awkwardly brushes them off. A flabby flashback portrays him as a friendless, misfit orphan who's been shunned all his life but his constant, often unjustified crankiness makes it hard to root for him in the movie's first half.

Red's persistent exasperation continues to make him unlikable, even after the Pigs' arrival destroys his house and throws everything out of whack on Bird Island. After setting anchor, Pig leader Leonard makes friendly sales pitch overtures, which include the slingshot central to the mechanics of most Angry Birds games. Red sneaks on the porkers' boat and finds more pigs than were divulged. He then declares that "something isn't kosher with these pigs" — the humour never rises past this level of tired-arse punnery — and goes on a quest to find the long-lost Mighty Eagle, the mythical protector who's the only bird on the island capable of flight. As the pigs overrun the island, their plot to steal the birds' eggs comes to light.

Angry Birds is a movie assembled by lowest-common-denominator template. The pool-of-pee sequence got the biggest laugh from the kids at my screening but it only got one such response over its overlong runtime. This film is filled with fake transgressive humour that's meant to be edgy but comes across as tone-deaf. Snippets of "Rock Me Like a Hurricane", "Wild Thing" (the Tone Loc one) and "Close to You" get peppered throughout the movie, serving as an expensive laugh track that betrays the poor craft on display. It's hard to imagine gags like a Piggy Island poster advertising Kevin Bacon in Hamlet or mentions of celeb DJs Daft Pork and Steve Aoinki landing well with kids who were obsessed with Angry Birds four years ago. Most are probably too young to get the jokes or too old to care. Adults will probably just find them too bland for a chuckle.

When Red and crew learn that Mighty Eagle is a retired grandiloquent fraud, his refusal to help comes as he's using a telescope to creep on ladybirds from afar. Who exactly is that supposed to be funny for? Later, after the green porcine bad guys sail off to Piggy Island with the birds' unborn next generation, Chuck says it's time to "start replacing those kids. Ladies get busy. We gonna be laying some eggs tonight!" Red's rallying speech includes the line "I need some angry flocking birds." Ooh, look, squint-and-you'll-miss-it references to sex and cursing in a film adaptation of a game loved by kids.

I'm not naive; I know that 11-year-olds in the real world drop four-letter words like nothing and are at least indirectly familiar with the mysteries of the horizontal tango. But adolescent humour in a film like this isn't brave or edgy when done poorly. The jokes specifically aimed at adults are also way too broad and bizarre. Opening a door while storming Pig Castle reveals two twins chanting "redrum". Why an homage to The Shining? Presumably, because no one said no. The wordless antics of a mime sit there as an exemplar of the lazy grandpa comedy Angry Birds calls to battle. "Mimes! Mimes always get a laugh, right?" Not if you're trying this damn hard. Watching this film is like being haunted by that one class clown who always humiliated himself in attempts to win other students' love. The only laughter comes from a place of shame and pity. 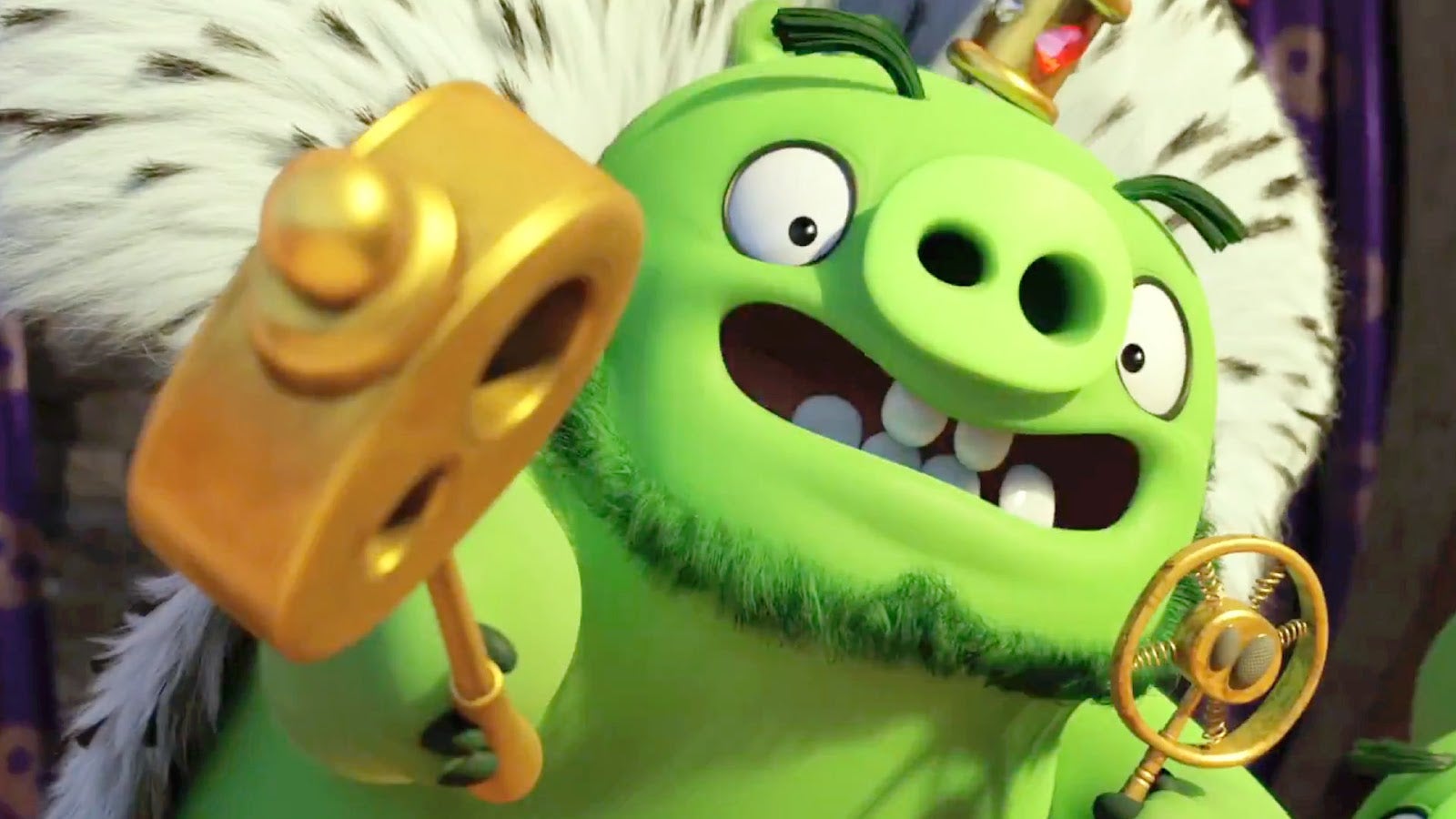 The dramatic climax of the film starts when the birds fling each other at the palace, a ham-fisted (look, if they're gonna do it, so am I!) attempt to invoke the core Angry Birds gameplay experience. "Just look where the last bird went and adjust from there," Red says smarmily. Sure, you'll clear a level like that, but you need to do better if you want three stars. After the birds begin their siege of Pig Castle, one of the main characters exclaims "we're making history here!" It's the wrong kind of history. From there, it's a buffet of recycled by-the-numbers plot beats: "Don't be a hero." "We're outnumbered!" "You don't know when to stop, do you?!" "I thought you were dead!" Bomb's performance anxiety gets overcome, Terence turns out to have a lovely singing voice and Red's transformation in a hero comes from saving fuzzy blue triplets that were presumed dead. These sturdy pillars of popcorn fare gets rolled out in their most basic form with no cleverness or subversion to justify their presence. This isn't Inside Out or The LEGO Movie. There's no heart or soul here. The execution reeks of contemptuous four-quadrant Hollywood calculus. "One hundred and fifteen minutes of poop jokes, cookie-cutter melodrama and pricey licensed music… this is how's it done, right?"

Near the end of The Angry Birds Movie, the evil king pig says, "Looks like your little slingshot game ends here." Angry Birds' heyday ended a while ago. This is just a massive in-game purchase masquerading as a movie, Rovio's attempt to squeeze more money out of parents who've passed touchscreen devices to little hands to keep their kids happy. Put your children's faces in front of something better this weekend, for their sake and yours.