And God Said, 'Let There Be Emojis' 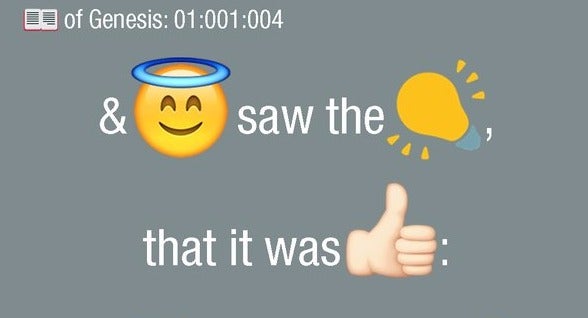 Are those long pages filled with words getting to you while at church? Maybe you'll benefit from a new version of the Bible that's made from emojis. Photo courtesy Bible Emoji Twitter

"Bible Emoji: Scripture for Millennials", which stems from the Twitter account of the same name, was written by somebody only known as ???? and was put up for sale on the iTunes store on Sunday for $3.99.

The new book is a translation of The King James Version, which most know as the authorised edition, and says it explores all 66 books. So, just like a written-out version of the Bible, it's very long. "Bible Emoji" clocks in at over 3200 pages, but luckily is available only in digital formats.

???? is also the creator behind @BibleEmoji, which posts excerpts from the Bible in a combination of emoticons and slang.

4 ? so ? the ?, that he gave his only begotten son, that whosoever believeth in him should not perish, but have ∞ life.

"I thought if we fast forwarded 100 years in the future, an emoji bible would exist," ???? told The Guardian. "I wanted to make it similar to how you might text or tweet a bible verse, by shrinking the total character count."

"Bible Emoji" is clever in this regard. Emojis have become a part of our online vocabulary and younger generations use them frequently when communicating. If you think of emojis as just a simpler form of language, it was only a matter of time before a religious text was written with them.

Plus, emojis and unicode characters can sometimes turn simple statements into puzzles, which can make reading them more fun. Try reading any of Carrie Fisher's tweets and you'll see what we mean.