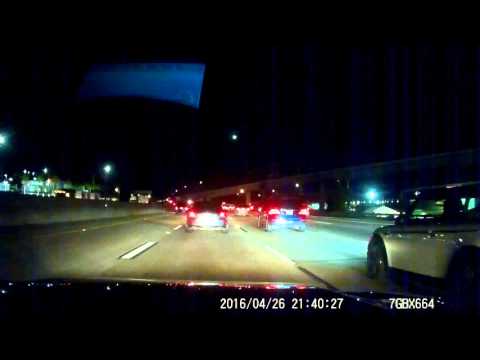 Video: Countless people reported seeing a strange green orb tear across the southern California sky last night. And as shown in a recent YouTube upload — complete with a perfect soundtrack — it looked spectacular.

While some concluded aliens were behind the impromptu light show, the above dash cam footage shows that the source is almost surely a meteor. This explanation seems even more likely since the Lyrid meteor shower, which reached its peak last Friday, still has some stragglers hitting the atmosphere.

In this case, it’s worth pointing out a noteworthy characteristic of Lyrids: they tend to create exploding fireballs. Depending on what metals are in the piece of space rock, it can glow all kinds of colours. NASA says that space debris with a green glow are usually full of magnesium. The Griffith observatory additionally confirmed that the this blazing ball was likely a piece of descending space junk.