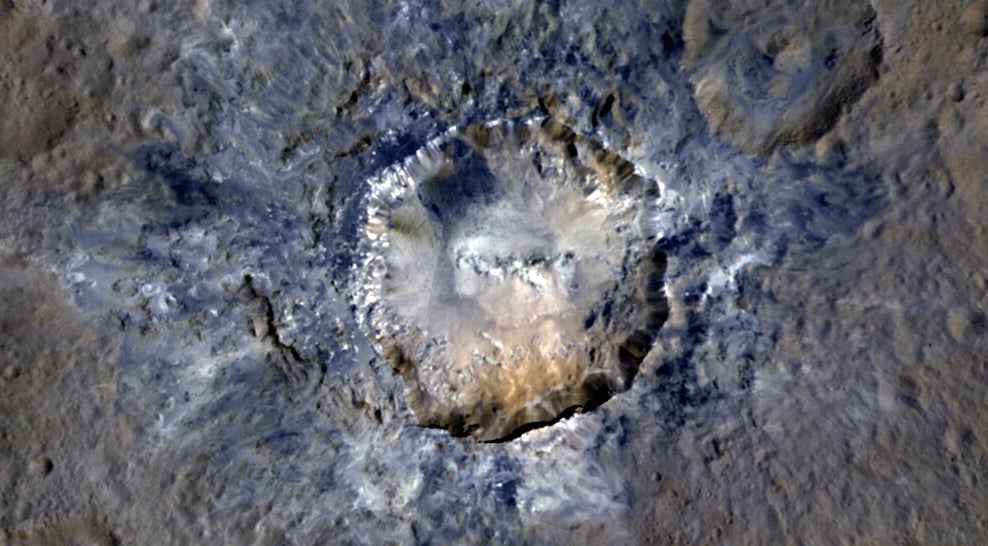 We have a good idea of what those bright spots on Ceres are, but the question of how they got there remains mysterious. Now, an incredibly low-altitude image of the dwarf planet reveals details about their origins.

Nasa’s Dawn spacecraft is currently in its lowest orbit over Ceres, just 386km above its surface, and it’s capturing the closest images we’ve seen yet of the mysterious bright spots. Now we know that the glow likely comes from salt, and researchers have shifted their attention to the craters that house them. It turns out the craters are newer than we originally thought.

The Haulani crater, which you see above, seems to be particularly young. “Haulani perfectly displays the properties we would expect from a fresh impact into the surface of Ceres. The crater floor is largely free of impacts, and it contrasts sharply in colour from older parts of the surface,” explained Martin Hoffmann, co-investigator for the research.

Researchers are also learning about what lies beneath those bright spots — namely, an active network of fault lines. The giveaway is the shape of the craters, which are often fractured into polygons. Even more evidence of that active geology can be seen in the Oxo crater, the second brightest object on Ceres, which appears to have caved-in along one side.

Though this new information answers some questions, it also raises new ones. When researchers looked closer at that Oxo crater cave-in, they found that whatever minerals were lying on its floor seemed to be different from anything they have seen on Ceres. Figuring out just what the minerals are, and how they got there, is the next step.