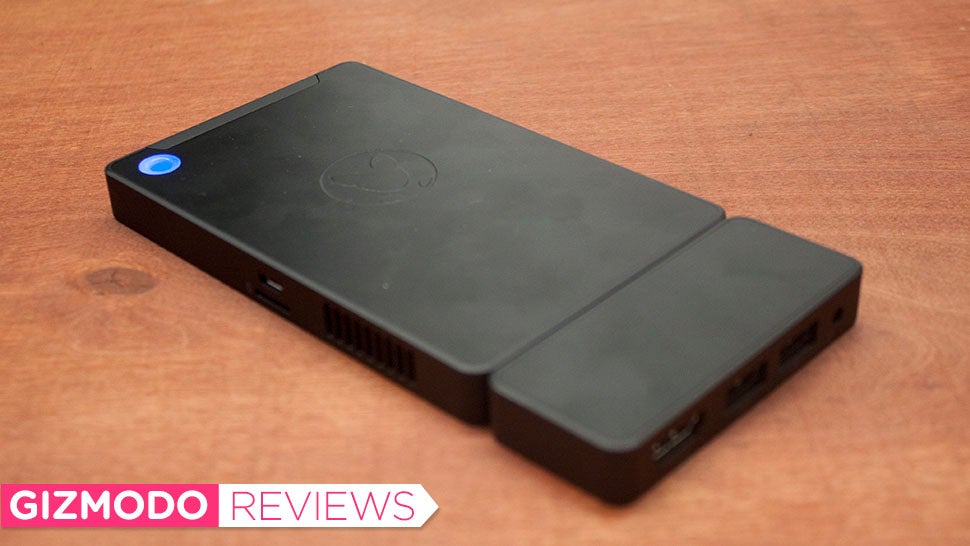 Consumer tech has always been on a steady march towards the minuscule, and the most well-known anecdote is the PC. Computers once filled entire rooms, but laptops, now more powerful than ever, can slip comfortably into backpacks. Now, full Windows PC’s can fit in the palm of your hand, and within this new class of computer, the Kangaroo proves its worth.


InFocus, the company behind this iPhone-sized Windows 10 machine, isn’t the first to try to make monitor-less PCs ultra-portable. Intel has its $US130 ($169) Compute Stick that runs Windows on a small 13cm dongle. The Kangaroo is the same idea — with a few key differences. For one, the Kangaroo is only $US140 on Amazon, incredibly cheap for the what you get packed inside. Second, and this is the big one one for me, it’s got a lot of ports.

No bigger than an iPhone 6s Plus.
Teeny PCs are only possible because Bluetooth sucks significantly less than it did only a few years ago. You no longer need an entire streak of ports down the backside of your computer. In fact a lot of PCs like to go completely wireless and ditch ports entirely. That’s great for their form factor, but impractical for most people. The majority of people don’t have wireless peripherals packed away in their closets.

Compared to the Compute Stick’s one measly USB port, the Kangaroo includes three and they’re all a different kind of USB: USB 2.0, 3.0, and microUSB. This makes more sense if you want to use a keyboard and a mouse like most people in the universe would want to do. But this wealth of ports (its a lot for a PC this small!) still doesn’t include an audio jack. Same goes for online connectivity — there’s no ethernet port in sight. You’ll still need to embrace the wireless ethos via Bluetooth 4.0 and 802.11AC wifi.

HDMI, USB 3.0, USB 2.0, and power port. The Kangaroo can also be charged and run on a battery, but only for a couple hours.
But seriously, whatever. There are enough ports to make this a hacker’s dream. Want to build an emulation station? The Kangaroo has you covered. Just need a portable email server or torrent box? You could do a helluva lot worse. Even business folks could find it appealing? Instead of dragging a USB stick around with your presentations you can load them on the Kangaroo.

Yet using any $140 machine, whether a laptop or brick PC, is an exercise in managing expectations. Apps frequently needed a minute to quit spitting out loading icons and small graphical glitches, but ran well once they were open. The Kangaroo only comes with 2GB of memory and 32GB of internal storage, and while the internal storage isn’t much of a deal breaker with cloud storage being so cheap the 2GB of RAM puts some serious limitations on what you can do with the Kangaroo. Don’t plan on streaming Blu-Ray quality video from this guy.

For only $US70 more, you can upgrade to the developer addition, which comes stripped clean of any OS (Linux and Hackintosh fans rejoice!), but you’re also getting a 4GB or RAM upgrade and more internal storage (pre-OS installation).

One of the most natural uses for the Kangaroo is as a portable game emulation box. The guts inside are more than enough to get your SNES or Sega Genesis on (please make sure you own the games you’re playing), but the Kangaroo can play other games too — surprising well even. I’m an indie gamer, so most games I download from Steam are light on graphics. Some of my favourites, like Luftrausers and Hotline Miami, played without a hitch.

However when upgrading to anything that just slightly pushed more pixels, like the relatively mild Gone Home, the Kangaroo would stall out on the load screen. Other times I had to significantly reduce resolution to get it to run properly. This really isn’t a gaming machine unless those games are 32-bit or less.

Power button and fingerprint sensor, which is actually surprisingly good.
Despite these issues, it was awesome turning my 2013 LG TV into a Windows PC. Although many new televisions are (mistakenly) focused on smart TV ecosystems, the best TVs are those with super-good displays and a lot of HDMI ports. That’s where the Kangaroo absolutely shines as a set-it-and-forget-it PC, turning one HDMI output into a full Windows 10 computer.

If you don’t need a Windows PC for major media editing or gaming, the Kangaroo can be a complete computer replacement — we’re talking a fixed diet of light app use, social media, and other web stuff. Think of the Kangaroo as a brick-sized Chromebook for Windows.