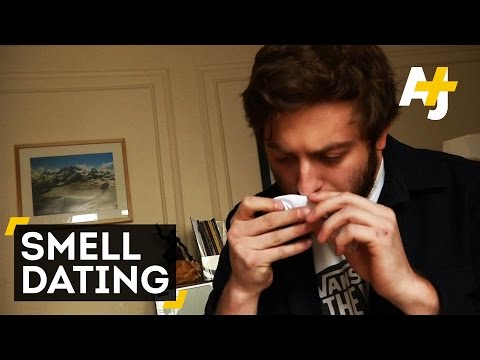 You’re young and single and looking for love, and the usual online dating services haven’t panned out. A new matchmaking service has a crazy idea: It wants to let you choose a lover by letting you smell a bunch of t-shirt samples.


I know, it sounds like an April Fool’s prank. But apparently it’s real — albeit more akin to a fun US-based project at the moment than a viable commercial business. Smell Dating is the creation of artist/teacher Tega Brain and editor/researcher Sam Lavigne. The idea is based on the science of pheronomes, chemicals secreted when the body sweats, which scientists believe play a role in mate selection in many species.

According to the Smell Dating website‘s FAQ, “Unlike sight and sound, smell is interpreted first in terms of memory and emotion before being mapped to language. When it comes to long-term romantic partnership, it may actually be riskier to ignore the powerful signal of scent than to rely on it.” Here’s a promotional video, complete with classy boom-chick-a-bow-wow soundtrack:

One hundred “clients” forked over a one-time $US25 ($33) fee to participate. New York University graduate student Jesse Donaldon is one of the people who signed on for Smell Dating’s trial run because he felt services like Tinder and OK Cupid were too much like online shopping. And as he says in the promotional video, “If I get a match, why not? At the very least it will be an interesting evening.”

This isn’t the first time someone has come up with the idea of matching potential partners by their pheromones. As Oddity Central points out, a few years ago, so-called “pheromone parties” were all the rage among the singles set. Guests would fork over an admission fee for the privilege of sniffing stinky t-shirts in Ziploc bags, in hopes of finding that special someone through their unique scent.

In fairness, there’s some solid science behind this rather wacky idea. Specifically, a famous 1995 experiment on the role of smell in human mate selection by Swiss biologist Claus Wedekind, dubbed “the sweaty t-shirt study.” There was also a 2011 Polish study in the European Journal of Personality, which looked at how well people could make assessments about key personality traits using just their sense of smell. Researchers from the University of Wroclaw had a group of 30 men and 30 women sleep in the same white t-shirt for three consecutive nights before sealing it in a plastic bag. Then they brought in a team of 200 “sniffers” to take a whiff of each shirt and guess how anxious, dominant, or extroverted the wearer might be.

The results weren’t exactly a slam dunk, but the sniffers were just as accurate in their personality assessments as the control group, who based their assessments on viewing videos of the subjects in an earlier study. “It’s possible that fear, stress, and positive emotions are each related to the production of specific substances that influence body odor,” psychologist Scott Barry Kaufman wrote about the study at Scientific American. “For instance, maybe neurotics sweat a lot, and sweat has a particular smell.” But he pointed out that there could be lots of other variables affecting one’s personal scent as well.

But seriously now — can you really find true love by smelling someone’s sweaty t-shirt? University of Queensland’s Phillipp Kirsch thinks not. “It is a sensible or plausible way to identify a partner if the only important criteria is how this partner smells when your eyes are closed, and the sole purpose is sexual,” he told Oddity Central in 2014.