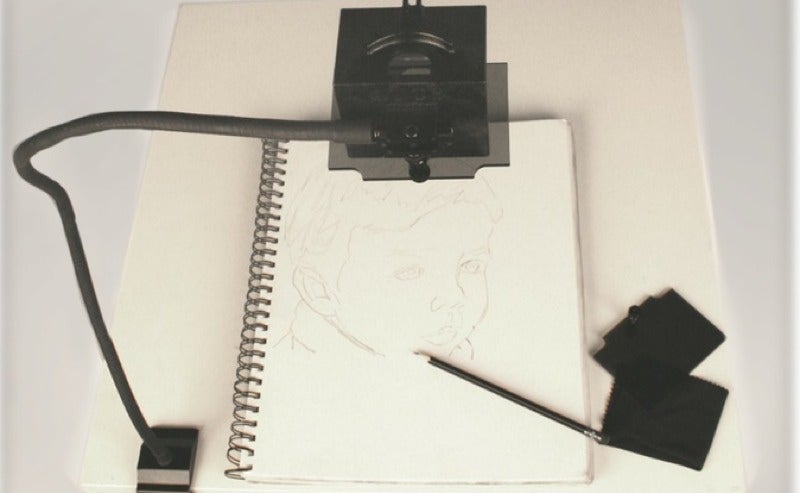 Artist David Hockney once stirred up controversy by asserting that many of the great Dutch masters — folks like Vermeer and Ingres — had relied on optical drawing aids to create their masterpieces. Now everyone can channel their inner Dutch master with the LUCY drawing tool.

It’s designed by Les Cookson, an artist and inventor who has been building, researching and designing optical toys and tools for over 10 years. Conceptually, LUCY is based on the camera lucida, an optical artist’s aid invented by an English physician named William Wollaston in 1807.

The earliest camera lucida was basically an extendible tube with a reflecting prism and sighting lens, mounted on a stick that could be attached to a drawing table or surface. The prism was deliberately shaped and oriented so that the rays of light from the scene were reflected twice within the prism before reaching the eye.

This way, the eye sees the image the right way up, rather than inverted, which is what happens with your typical camera obscura (that is, a simple pinhole camera). When the stand is adjusted so that the prism half covers the pupil of the eye, the artist has the illusion of seeing both the object — which is reflected through the prism — and its outlines on the drawing board. 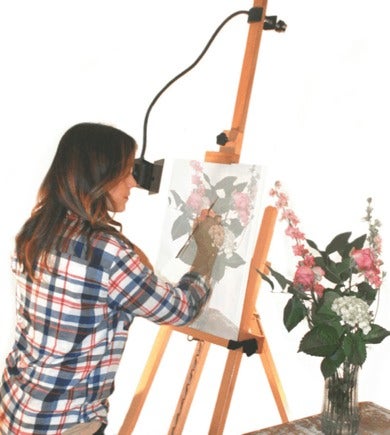 According to Cookson’s Kickstarter page, “When you look through the LUCY’s view hole, optical mirrors create a transparent “ghost” image of the scene in front of you reflected down onto your canvas or paper. Just draw or paint over the reflected image to get the correct perspective, foreshortening, proportion, position, overlap, shape.”

This isn’t the first company, or even the first Kickstarter, to offer a modern take on the camera lucida: back in 2014, art professors Pablo Garcia (Art Institute of Chicago) and Golan Levin (Carnegie Mellon) designed the NeoLucida and sold the drawing aid for about $US50 ($66).

Cookson outlines several benefits of LUCY over similar tools. You can adjust the brightness of the image as needed, as well as the the height. And it’s flexible enough that you use the device while sitting at an easel (or a table), or while standing.

One caveat: even these modern incarnations of the camera lucida require a bit of skill to use. Remember, it doesn’t actually project an image of the subject onto paper; the image seems to appear on the drawing surface only when the artist looks straight down into the prism. And even slight movement of the head will cause the image to move, disrupting the accuracy of the tracing.