Another Star Wars Hero Is Definitely Coming Back For Episode VIII 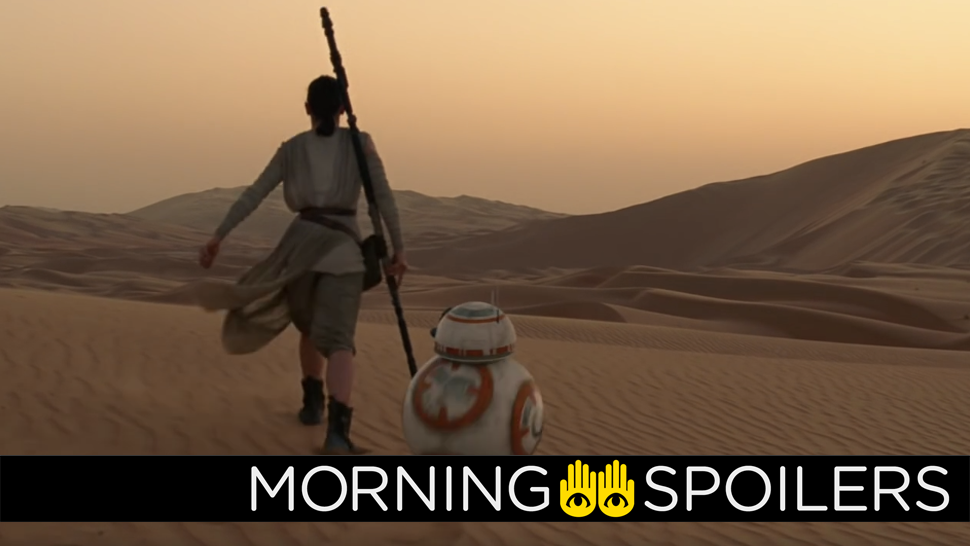 An Arrow star is heading to The Flash, with a twist. Zack Snyder discusses Ben Affleck’s reticent involvement in the standalone Batman movie. Get a whole new look at the Doctor Who spinoff’s cast. Plus, an update on the Last of Us movie, and new clips from Agents of SHIELD and iZombie. Spoilers get!


The Last of Us

Game developer Neil Druckmann offers an update on the movie adaptation of the post-apocalyptic survival game, confirming that the project is currently in limbo:

I know I said in an interview a while back we had a table read, got the script to a good place and it kind of entered development hell like these things tend to do. There hasn’t been any work done on it in over a year and a half.

In news surprising to no one, Dave Bautista has officially confirmed that he has joined the movie.

I'm so excited to be able to share this news! Thank you for your support in everything I do. It's humbling. pic.twitter.com/1hlRfdLF6v

Elizabeth Olsen tells ET that Scarlet Witch and the Vision will form a closer relationship in the film — a potential hint at the romance the two shared in the comics:

You learn a little bit more about what connects [Wanda and Vision] in this film. And I think there’s some really sweet moments between Paul and I, and it’s more about how they relate to one another and their similarities just based on their superpowers.

Ben Affleck’s complete lack of desire to acknowledge his long-rumoured involvement in a solo Batman movie continues! This time, Zack Snyder discusses having to beg the actor to consider a standalone Batman film:

I keep working on him. He always says ‘I’m like a one movie at a time guy.’ He’s finishing his film, Live by Night, and then he comes to Justice League, and then we’re going to start to try and develop this story. So then we’ll see if he likes that.

Here’s a viral message from the Lex Corp instagram account. The accompanying in-character text claims their “newest project” will launch in 2017 (the same year as the movie), presumably hinting at Lex’s role in the film.

We hope we haven't lost you as our valuable client. #LexCorp Something big is coming. Our newest project will be fully functioning by 2017. Thank you for standing by our side. #timeforchange

Rian Johnson has shared a new behind the scenes picture on tumblr, confirming that Lupita Nyong’o will reprise her role as Maz Kanata in the film.

Meanwhile reports from British tabloid The Sun — so scepticism at the ready — claim that actor and comedian Ade Edmondson has joined the movie, after impressing both director Rian Johnson… or more specifically producer JJ Abrams, allegedly the “driving force” behind the casting.

Here’s a new series of posters focusing on the four horsemen who accompany Apocalypse.

Speaking at a press event, Executive Producer Marc Guggenheim confirmed that Katie Cassidy, who plays Laurel Lance/Black Canary on Arrow, will be appearing in a cameo appearance later on in season two, but not as Laurel — instead, her Earth-2 counter part, who is actually the Golden Age incarnation of Black Canary, Black Siren.

In the comics, Black Siren was Donna Nance, and the only active female member of the Justice Guild of America. [Comicbook.com]

Echo Kellum, who plays Curtis Holt (aka Mr. Terrific from the comics), has been promoted to season regular for the show’s fifth season. [TV Line]

Daisy encounters a man who can see the future in a new clip from tonight’s episode, “Spacetime”.

Should you be so inclined, you can now experience yesterday’s casting announcement through the magic of 360 degree video.

Clive faces a tempting offer to move out of the Seattle PD in a new clip from “Reflections of the Way Liv Used to Be”.

Finally, a gallery of images from “The Devil Comes Here and Sighs” has been released — you can find more at the link. [Spoiler TV]