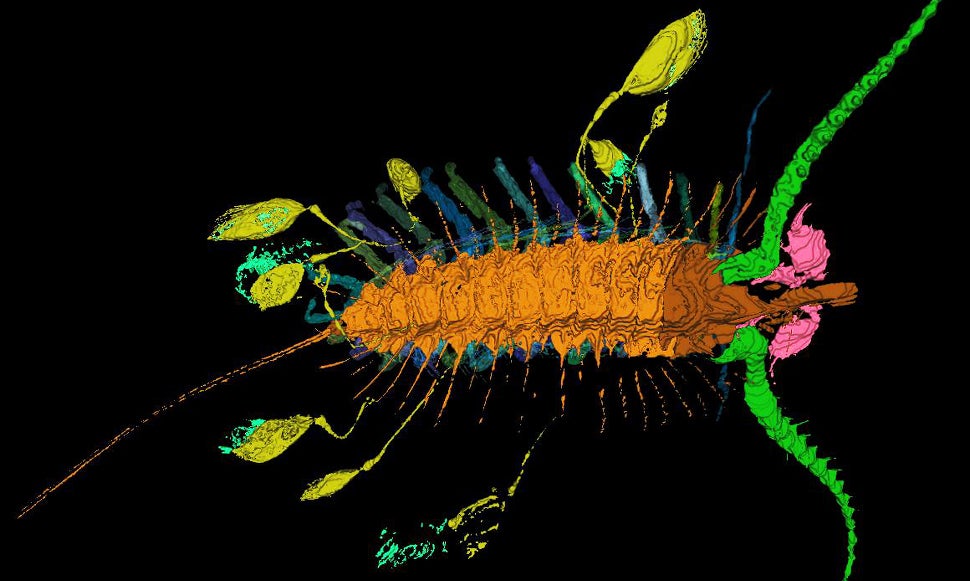 Animals have evolved all sorts of different ways to carry around their young, but scientists have never seen anything quite like this before.

This bizarre creature lived about 430 million years ago in what is now England. It goes by two names, the formal Aquilonifer spinosus and the informal “Kite Runner’, named in honour of the 2003 bestselling novel of the same name. The researchers who discovered the creature thought the name was apt given its unique brooding style, in which it carries around its young in tiny pods tethered to its body like kites. The details of this discovery can now be found in the Proceedings of the National Academy of Sciences.

Normally, crustaceans protect their eggs and embryos by attaching them to their limbs, or by enclosing them with a special pouch. But this particular brooding style is completely new to scientists. As noted in a press statement by Yale palaeontologist and lead author Derek Briggs, “Nothing is known today that attaches the young by threads to its upper surface.”

Only one fossil exists of A. spinosus. The lone adult specimen measures less than 1.3cm long, and features an eyeless head covered by a shield-like structure. It lived on the seafloor during the Silurian period along with sea sponges, brachiopods, worms, snails and molluscs. The fossil also contained 10 juvenile arthropods at different stages of development. Each of them were connected to the adult by a single thread.

The scientists considered the possibility that the tiny creatures were actually parasites, but the unwieldy configuration couldn’t have been conducive for sucking up nutrients. The only viable explanation for the tethered configuration was a novel form of brooding.

“As the parent moved around, the juveniles would have looked like decorations or kites attached to it,” noted Briggs. “It shows that arthropods evolved a variety of brooding strategies beyond those around today — perhaps this strategy was less successful and became extinct.”