After A High-Speed Chase In LA, Suspected Burglars Have Time To Pose For Selfies Before Cops Arrive 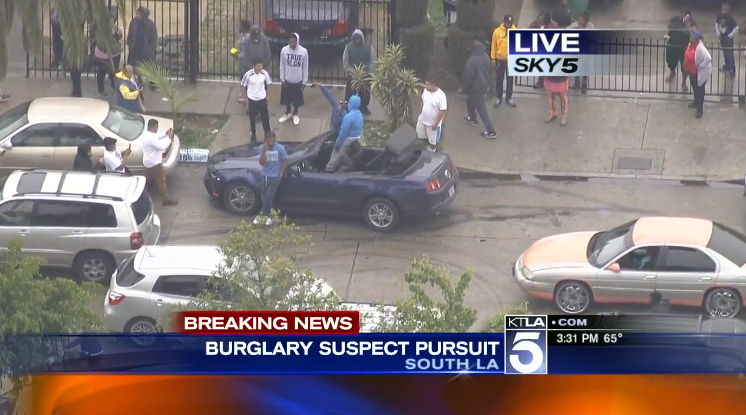 It’s not really how anyone expected one of LA’s most bizarre police chases ever to end.

The convertible navy blue Mustang had been driving for hours with its top down in the rain, nearly T-boning a TMZ tour bus and doing doughnuts on Hollywood Boulevard.

OMG THE TMZ BUS JUST TRIED TO CUT THEM OFF pic.twitter.com/xTuFzfiwLX

After meandering through traffic on the southbound 101, the Mustang exited the freeway and casually parked on a residential street. Except… the police were nowhere in sight.

Thanks to the half-dozen news helicopters filming and narrating the drama as it unfolded, we, the people of the internet, got to see what happened next.

Two men — who were being apprehended because they were burglary suspects — calmly exited the vehicle. If the people on the footpath knew of the Mustang’s notoriety, they did not show fear. In fact, there was an almost celebratory vibe, as if the men had just participated in some kind of parade, and they began shaking hands and high-fiving with people on the street.

And that’s of course when the selfies began.

The end of this police chase just ended with a 10 minute long selfie session…I've seen it all pic.twitter.com/ce2opMSYO8

At first it was the driver and passenger taking a selfie of themselves. But then other people began approaching the men and requesting that they pose for selfies with them. Which, of course, they did.

After almost 10 minutes — 10 minutes? Did LAPD get lost? — the police decided to show up, and both men were taken into custody without incident.

Remember: Pics or it didn’t happen.