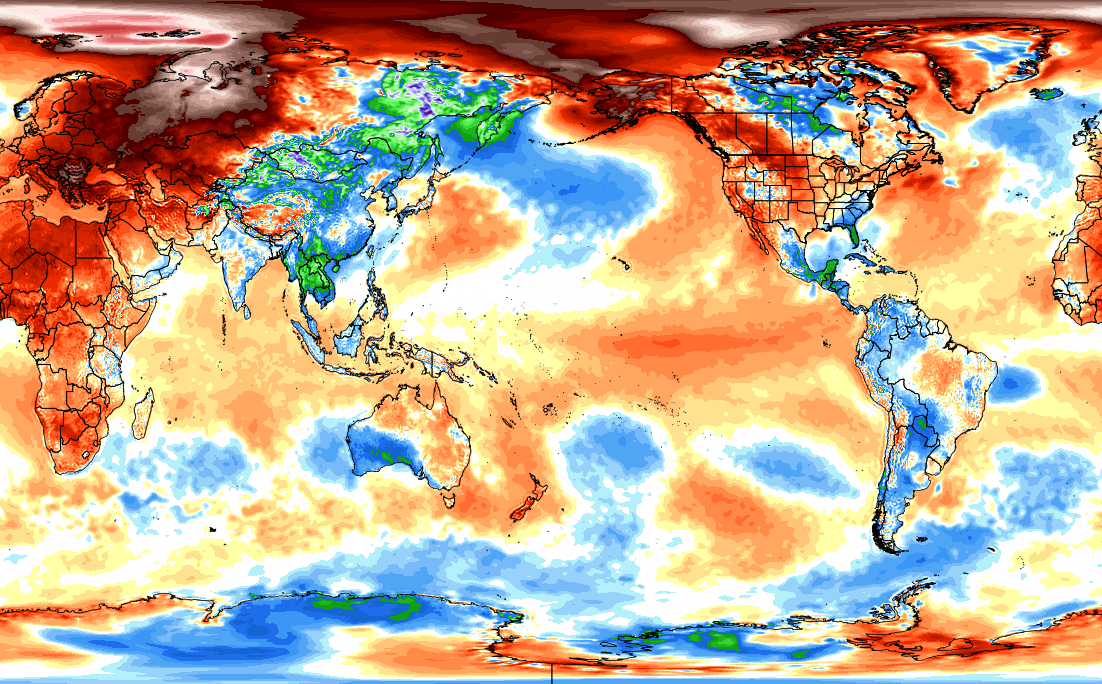 Wasn't it just yesterday that we learned January was the hottest month in recorded history? Not any more. The official numbers aren't in for February yet, but meteorologists are already calling it: Last month destroyed January's global temperature record, adding another 0.2 to 0.3C to the planetary thermostat. The reason, scientists say, has a lot to do with how the oceans store heat.

NOAA will put out its February 2016 climate report in a few weeks, but in the meanwhile, there are many unofficial temperature datasets that can be used to build a picture of our global heat wave. Slate meteorologist Eric Holthaus did some digging this week, and he found that February was somewhere between 1.15 and 1.4C above the long-term average — higher than the all-time global temperature record set in January. Even prominent climate sceptic Roy Spencer says that last month was record hot, with temperatures in the Northern Hemisphere a "whopping" 1.46C above the long-term average.

The recent pace of warming is by all accounts astonishing — but why? Yes, we all know it has to do with climate change, and yes, we've also heard a lot about how we're on the tail end of a very strong El Niño year, perhaps the strongest on record. But to really understand why the planet's thermostat has kicked into overdrive, we need to look at what's happening underwater.

The oceans are a tremendous energy conveyor belt, absorbing heat from the atmosphere and redistributing it around the world. For the past two decades, the Pacific Ocean has been sequestering heat like crazy, due to a combination of stronger-than-usual trade winds and a lack of major El Niño events. After heat is absorbed at the ocean's surface, it's driven down to deeper layers by circulation.

In fact, so much heat entered the deep Pacific from 1998 to 2014 that temperatures at the surface of the Earth stopped rising, fuelling claims of a global warming "hiatus". I covered a Nature Climate Change study describing this massive heat sink back in January. Here's what I wrote at the time:

Pulling together data from diverse sources, including the 19th century Challenger expedition and a new fleet of monitoring devices called deep Argo floats, climatologist Peter Gleckler and his colleagues have now tracked changes in the energy balance of the ocean over the past 150 years, creating the longest continuous record of what's happening at different depths.

Overall, they found that nearly half of the industrial era-increase in global ocean heat has accumulated in the last 18 years....What's more, a full 35 per cent of that heat has sunk to below 700m in depth — eluding measurements and inciting claims of a warming "hiatus".

But just because heat enters the deep ocean doesn't mean it has to stay there. Which brings us to why climate scientists and meteorologists think we've been breaking temperature records nonstop for the past year: deep ocean heat is starting to rise.

In 2014, the Pacific Decadal Oscillation (PDO) — a recurring climate pattern that you can think of as a longer-term version of El Niño — shifted from a cool phase to a warm phase. Around the same time, the trade winds began to settle down. The result? Warm water started circulating back to the ocean's surface. "Then in 2015, with the onset of El Niño, wind, cloud, and ocean circulation patterns all shifted significantly, resulting in more of that warm water surfacing," NOAA climatologist Gregory Johnson explained to Gizmodo in an email.

As for whether global temperatures will continue to surge? Over short term, that depends on whether the PDO remains in a warm phase — something that's notoriously difficult to predict. (Since the early 20th century, the PDO has completed two, roughly 25 year-long warm phases, and both of them were associated with a burst of planetary warming.)

Over the longer term, it depends on whether we continue pumping fossil carbon into our atmosphere, a habit that leaders of 195 countries recently agreed to kick by the end of the century. Greenhouse gases are the master switch behind our planetary thermostat — and by fiddling with their atmospheric concentrations, we've already locked ourselves in to decades of future warming.

Here's hoping that a freakishly hot winter motivates us to double down on those promises we made in Paris.