What Is Facebook At Work And Do You Need To Care? 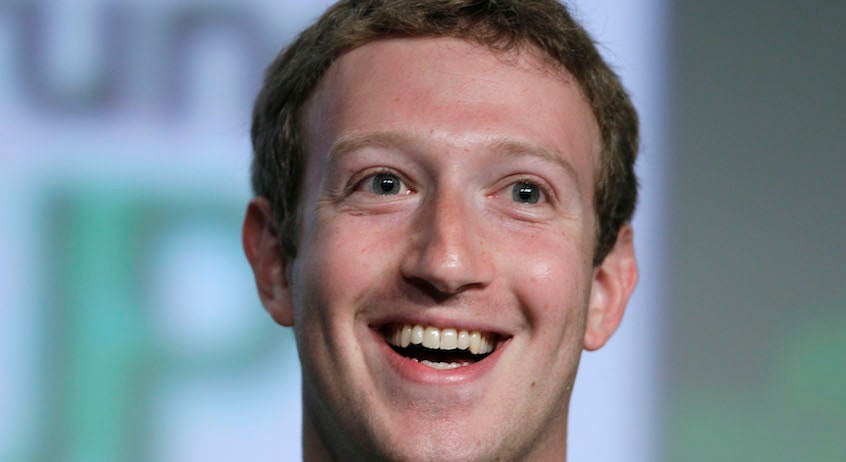 On Facebook’s never-ending quest to take over the world, no stone is left unturned. It has left fingerprints on virtual reality, messaging platforms, games and apps for people who like brunch.

Until recently, however, it stayed away from enterprise software — programs used by companies to keep track of their business and employees. (Unofficially, of course, Facebook has long existed in the hidden browser tabs of workers everywhere. What do you think I’m doing right now but stalking my ex-flame’s terrible taste in friends?) But in early 2015, Mark Zuckerberg and company decided to jump feet first into the enterprise market with a product called Facebook at Work.

It’s pretty much exactly what it sounds like: A professional version of the Winklevoss twins’ least favourite social network. Only available to one specific company, it functions like a cross between Gmail, Slack and Asana, and lets a company’s employees and teams interact with each other on a platform that most of them are probably already familiar with. It’s not regular Facebook, though, and the company is quick to point out that the two function separately. Your weird, late-night Facebook exploits are safe from the prying eyes of your boss! Except honestly probably not because nothing is sacred on the internet. 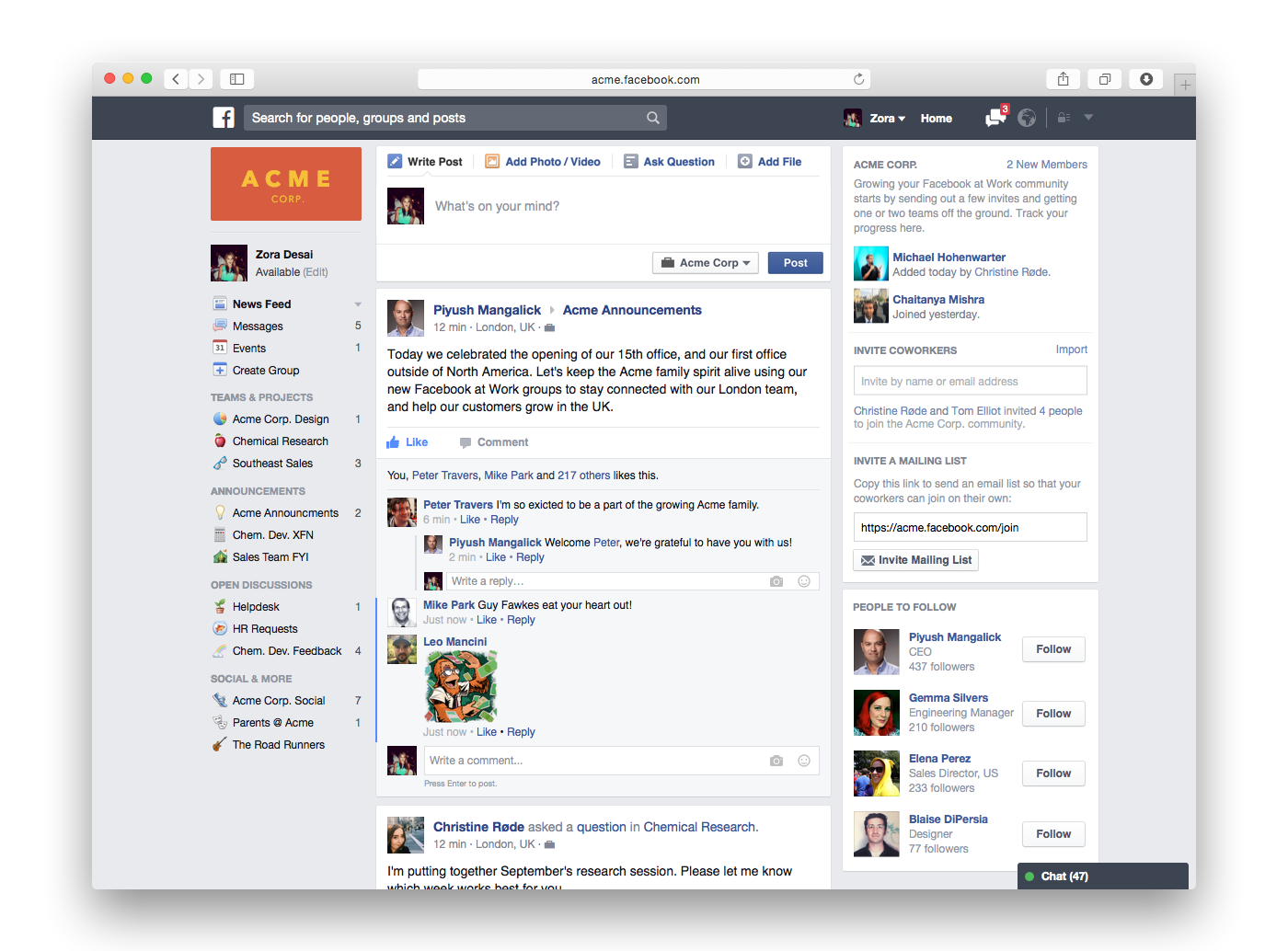 Anyhow, Facebook at Work made waves on Wednesday when it announced that Telenor, a giant Norwegian telecommunications company with 36,000 employees worldwide, had joined its ranks. The news prompted an influx of questions from the Gizmodo staff, including, but not limited to: What is Facebook at Work? Will it make life easier? Will it suck? Why is this happening? Will I hate it? Will it eventually tear my soul up into small pieces to use as fuel for Facebook employees?

To that end, here’s a handy list to refer to in case of any confusion surrounding the latest way to keep us all chained to our jobs for the rest of eternity. (Or is that called productivity?)

Glad you asked! Here’s a slightly irritating video to help walk you through it. Essentially, there are four main components to Facebook at Work: profiles, newsfeeds, groups and messaging.

A profile typically includes a photo and relevant employee information, like position and department. Groups can fall into three categories: open, closed or secret. Open groups are similar to a mass email — they can disseminate company-wide news or updates. Closed groups can be used to keep track of specific projects. Secret groups sound like a lot of fun: they’re unsearchable and invite only, so be sure to conduct your all your weird work-related bullshit behind their walls. The messaging client is similar to Facebook’s current messaging application.

Like regular Facebook, the newsfeed can be adjusted to the user’s preference, but it will mostly contain group updates, according to Vanessa Chan, who heads up communications for Facebook at Work. Chan also told Gizmodo that users will be able to trade the recently introduced Facebook Reactions with their coworkers. Prepare for an influx of ironic reactions from that one guy in sales who is almost certainly the cousin of the worst person in your philosophy class at university!

Also, instead of friending people, users can follow their coworkers, which means they don’t have to approve the request. So, good luck avoiding the weird dude you made out with in the kitchen that one time. 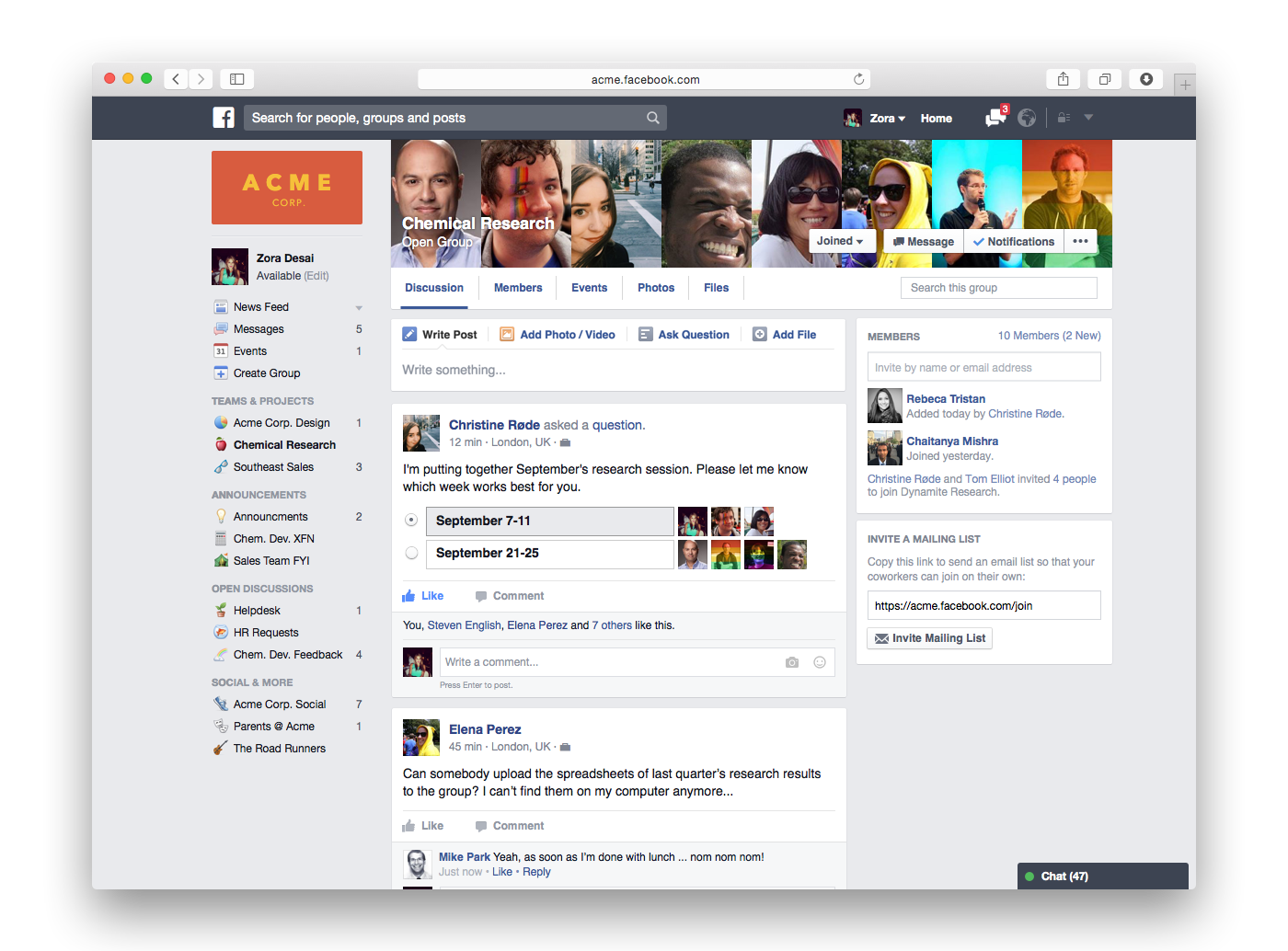 Is it going to make money?

The current version does not host ads, and Chan said that right now Facebook is focused on growing its user base rather than monetising. But, she said, it will likely follow a “freemium” model, which will allow companies to pay for advanced features like analytics. (What about FarmVille? What will become of my sheep? I can still hear them screaming at night, Zuckerberg.)

Despite the seemingly competitive nature of Facebook at Work — Julien Codorniou, its director, told Time that “[e]very email you send to more than two people internally can be replaced by something on Facebook at Work” — Chan said it wasn’t developed solely to compete with other enterprise software platforms. Rather, its origins “were actually pretty organic”, and were born from internal programs Facebook employees had already been using.

Still, there’s no getting around the fact that once it officially launches — likely later this year, according to Chan — it will be waging battle with companies like Slack, which is reportedly after a $US4 billion valuation.

The advantage, of course, is that most employees probably already have the skills necessary to use Facebook at Work, because they have been using standard Facebook for the past decade or more. (Chan pointed to some differences, including a “different colour scheme”.)

But as New York Magazine’s Brian Feldman writes, Slack has some advantages over Facebook at Work. “Slack is enterprise software made personal, while Facebook’s is personal software turned enterprise,” which brings us to the vital question…

Is Facebook at Work going to kill my work/life balance?

I mean, is there even such a thing any more? Sure, you can set up an automatic “I’m on holiday, leave me alone!” email responders. You can turn off Slack notifications. Hell, you can completely unplug if you really want. But we all know that’s a cruel mirage, because most of us will probably die alone, phones in hand, with the beginnings of a workplace email glaring at us from behind the terrible blue screen.

Facebook, apparently, is at least tangentially aware of this possibility. “Work/life balance is important to Facebook, and it’s something we’re thinking about when building a product like this,” Chan said.

Really, though, you haven’t answered my question: Do I need to care?

In its current beta version, Facebook at Work is currently only available to about 450 companies. Unless you work for one of these companies, you probably don’t need to worry or care about Zuckerberg’s latest project (yet).

However, if, like me, you are acutely aware of the impending death march toward the dissolution of any boundaries whatsoever between work and play: Yes, you should probably care. Then again, it’s only a matter of time before we’re all just working in pressurised glass chambers with weird protein tubes coming from pretty much every orifice. Oh, God. Someone hold me.