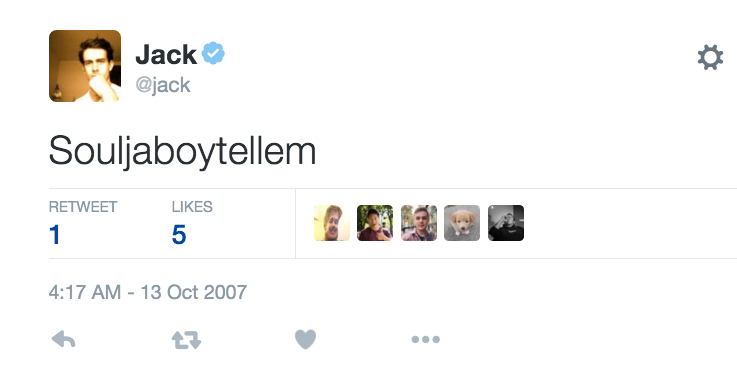 A little more tha 10 years ago, Twitter co-founder and CEO Jack Dorsey — whose body at the time was woefully unaccustomed to Prada suits, Rolex watches, and Shaker benches — sent the platform's very first message: "just setting up my twttr."

Back then, Twitter was barely a twinkle in Silicon Valley's dead eyes. Today, however, the company is… well, it's shedding executives, growing sluggishly, and causing anyone paying attention to wonder what the hell is going on. Yet Dorsey is still blissfully tweeting away.

And that's a good thing because sweet Baby Jesus, his timeline is a goldmine. Among other things, he has waxed poetic about the delights of bubble tea, meaningless (and sometimes misattributed) quotes, Alyssa Milano, Snoop Dogg, the dentist, scientology, and the phrase "souljaboytellem."

In the interest of public service and self-loathing, I spent roughly 11 hours of my own time going through all 19,000 tweets Dorsey ever sent. (I will admit that I skipped most of his tweets about Stephen Curry, because once you've seen one Steph Curry circle-jerk, you've pretty much seen them all.)

The reason for the exercise is simple: Twitter is a giant, unknowable corporate entity; Jack Dorsey, on the other hand, is an individual who chose to put the last decade of his life on the internet for everyone to point at.

After going through all of them, I humbly submit that the following are his very best and most impressive tweets. Happy 10th birthday, Twitter!

at the church of scientology. Oh what a night.

I love espadrilles. And this glass of wine. And the word "asperity."

Loved the cool breeze which awoke me this morning

Sat next to a transvestite who immediately ordered a vodka lemonade. Interesting 5 hours.

One could change the world with one hundred and forty characters.

Learning how Gengis Khan would lead a startup.

recalling the biggest smile I've ever seen on Brandon's face as...oh snap!...Snoop Dogg took the stage! Drop it like its hot

Going to eat in a radically different way

Learning that Gwen was in S Park yesterday! Hollaback, girl!

Don't hate me because I have a beautiful phone.

My champagne of the month club box is now completely biodegradable.

Today I'm going to mind and improve my posture. Black cherry yogurt and pineapple to start.

I'm having a conversation with Whole Foods over direct messages about their opening time. Nice!

Happy that Entourage is now on iTunes. Sad that I don't have time to watch it.

If you're havin' git problems I feel bad for you son. I got 99 problems but a branch ain't one.

Watching the MySpace party from my rooftop.

Drinking water with tiny bubbles and thinking about pearls.

A hummingbird buzzed my ear as I was looking at a tree covered in epiphytes.

Twitter oft reminds me of Rushdie's "Haroun and the Sea of Stories." Read it if you haven't.

Music loud as I program into the night

Wow, @newtgingrich is on Twitter and sent a letter to @biz!

Twitter succeeds when it's not talked about so much, blurs into the background, & is used as a utility. Like electricity.

http://en.wikipedia.org/wiki/SimTower My Favorite game. So hot.

Hindsight is 20/20, yeah, but you might want to delete this one, Jack.

@Alyssa_Milano So perfect. Thank you

The Milano fawning is one of the stranger characteristics of Early Dorsey Twitter. Besides their apparent friendship, Milano once wrote a comic book inspired by Dorsey and is also an advisor for Square, his other venture. I have no idea why this is a thing, but I'd probably still 'ship them.

Wow. Avatar was breathtaking. See it.

Sleeping is going to be difficult as my mind is racing. But I must. Goodnight, world.

Just gave a demo of @Square to Robert De Niro. He said: "wow."

Just made a pact to bring the scarf-tie back into fashion.

Best part of my week is walking with new employees from the Gandhi statue to @Square discussing our guiding principles. pic.twitter.com/95WBRLNw

Just what Gandhi would have wished for.

We can spend our time being disruptive, or we can be thoughtful and architect a revolution. pic.twitter.com/0r2Xys55

Remember when we used to carry metal coins around?

I recommend @RobbWolf's book The Paleo Solution to start a paleo diet. Answers the why, and is a fun read too.

“Imperfection is beauty, madness is genius and it's better to be absolutely ridiculous than absolutely boring.”—Marilyn Monroe

This is the single worst confluence of people and ideas I have ever seen.

It's not how something looks, it's how it moves.

I don't think you're ready for this Jelly. https://t.co/vVoEc9nUYf

16/I think Twitter is the closest thing we have to a global consciousness. And I believe the world needs that right now.

Got a haircut yesterday. #DisneySide pic.twitter.com/9IkLtzY8VD

As one former employee put it, "The greatest product Jack Dorsey ever made was Jack Dorsey." Judging solely from his tweets, this product amounts to lots of clear sunglasses, a weird devotion to Alyssa Milano, a brief flirtation with social activism, plenty of braggadocio, and a tremendous amount of airy solipsism disguised as wisdom. In fact, the overwhelming question I had after sifting through thousands of his tweets was how the hell he managed to get so lucky. He's worth approximately twenty-seven thousand million trillion dollars, and yet there's little to suggest there's anything particularly unique or interesting happening there.

Of course, looking back at anyone's online presence, especially 10 years of it, is a terrible idea that will only serve to remind you how embarrassing everyone is. But Dorsey has chosen to actively keep his around, which, given that Twitter shines most when it's in the moment, is an odd choice. (Then again, he doesn't really have one — deleting tweets probably wouldn't be a great look.)

To give him some credit, he did eventually learn how to present himself a little better, and his post-2010 tweets are marginally less embarrassing — though equally as boring — than the ones that came before. But they're also more sterilized: they're less "here's what I'm doing" Facebook status circa 2008 and more "I am an important person who now has a persona to maintain." The Jack Dorsey of 2006 and the Jack Dorsey of 2016 are both practitioners of Silicon Valley's most prized ethos — making something empty appear as though it's plump with value and promise — the latter is just more sophisticated. (To be clear, both suck.)

What all of this means for Twitter is a separate concern, and 19,000 tweets later, my answer is still, "I don't know, but please don't take @dog_rates away from me."

No matter what happens, however, at least we'll always have this.