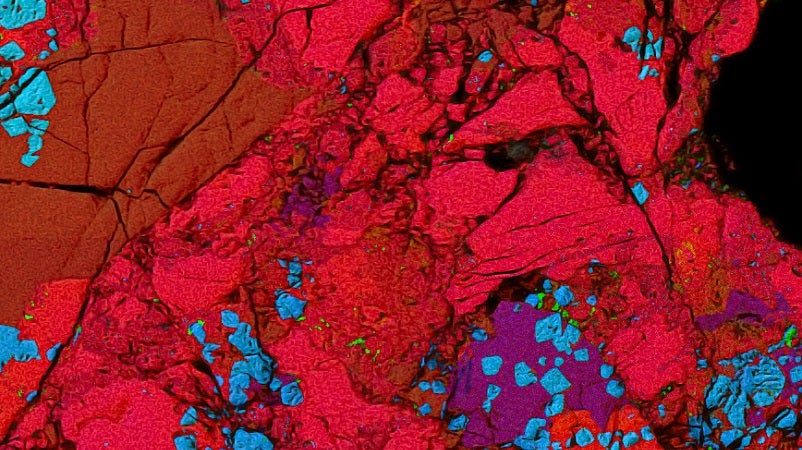 Scientists from the University of Chicago have taken a look at the Curious Marie, a bit of meteorite containing perhaps the most valuable ceramic in the world. These ceramic elements can tell us whether the early universe created heavy particles — without containing any of those elements. The journal Science Advances contains images of an unremarkable-looking rock. This meteorite contains the makings of an important discovery. It tells us that curium was definitely present in the early universe, despite the fact that it contains no curium. Curium is tough to find anywhere. It was discovered in 1944, when it was manufactured by sending helium nuclei rocketing into plutonium.

Up until now, we knew curium mainly as a human-made element. Even when it was manufactured, it didn't stick around for long. Curium-242 has a half life of 162 days. And while curium-247 has a much longer half-life of 15.6 million years, that's not much when compared to the life of a universe.

This made the plight of astrophysicists, who believed that massive star explosions during the early universe might have made curium and other heavy elements, very difficult. This belief started in the 1980s, but it took a long time for anyone to find proof. Any curium that might have been created during the early universe would be long gone by the time we got hold of a meteorite. Although curium-247 doesn't vanish, it decays into uranium-235. Most meteorites make it impossible to distinguish which uranium-235 is a product of curium decay and which is just uranium.

The Curious Marie is different. It is an inclusion — a fragment of older rock inside an existing rock — which is made of mostly of calcium and aluminium. These inclusions are known to have low amounts of uranium. These amounts are so low that a small increase of uranium, in this case a mere six per cent increase, can only be explained by the fact that uranium is the decay product of curium.

The fact that curium was one of the elements in the early universe doesn't change everyday life — but for those who want to know how the universe came to be the way it is, it's significant. Not only does it show how the chemistry of the universe changed over time, it lets us know what processes were at work in the stars as they synthesised those chemicals.