The New And Improved Hendo Hoverboard Looks Fun As Hell

I'm a hoverboard sceptic. I don't think that we're going to see a "true" hoverboard that can work on any surface anytime soon. With that being said, the new and improved Hendo Hoverboard, made by Arx Pax, looks pretty damn fun.

This 2.0 version of the Hendo still only works on a special copper surface, currently constructed in a lone warehouse in Los Gatos, California. But this time they have used a real skateboard deck, the battery has improved and there have been slight improvements in the ability to direct the board.

The Associated Press has a new video showing off what the thing looks like, but since the actual use of the board is only b-roll, it leaves one question: Does the thing still squeal like a banshee? The Verge probably said it best back in 2014 when they referred to the Hendo's "high-pitched screech" and "cacophony of squeals."

The makers of the Hendo acknowledge, as they always have, that the hoverboard is more or less just a concept to gain press in order to move forward with their true desire for bolder applications.

"We build and sell hover engines, we're not just about hoverboards," Kyle O'Neil, an Arx Pax engineer, told the Associated Press. "We have hover engines for a bunch of different applications."

Arx Pax initially endeavoured to make a system that would help levitate parts of buildings during an earthquake, but their current PR push now seems to be focused on the Hyperloop. 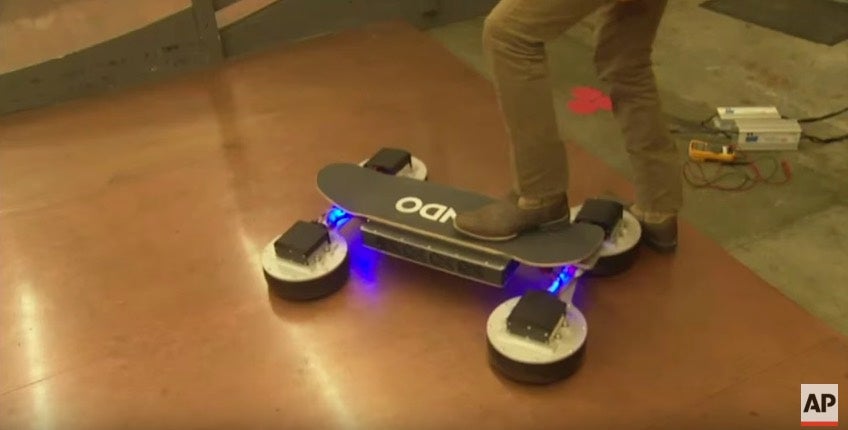 We're still a long ways from seeing copper-laden hoverboard skateparks dotted across the country, let alone hoverboards that work on regular footpaths, but the Hendo 2.0 does look like a humble step in the right direction.

And at least this thing actually hovers.