The Elektra Movie Is Somehow So Much Worse Than You Remember 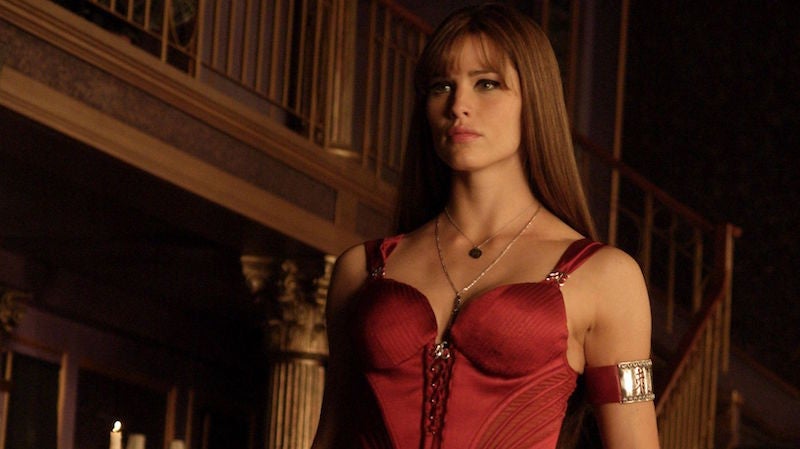 When Daredevil returns for season two later this month, we'll be treated to Élodie Yung as Elektra Natchios. The last time the Greek ninja had a live-action performance, she was portrayed by Jennifer Garner in the critically unacclaimed 2005 movie of the same name. And yet I'm here to tell you it's infinitely more terrible that you remember. Elektra isn't even a dumpster fire of a movie; a dumpster fire would have a more coherent plot than Elektra. I watched this movie twice in a row and I still don't think this movie has a story. It might be a nihilistic experiment in how long an audience can keep watching something before giving up on life. (And also the human race.)

Oh man, McCabe is so lucky he gets to die near the halfway mark. I was very jealous.

So here's the plot: Elektra is an assassin and her old master manipulates her into protecting Abby, a mysterious "treasure" who can tip the balance of good and evil in the world by her choice. Abby's powers mean that villainous ninja clan known as the Hand is chasing her down. This is all delivered in one stilted conversation at the 1:04 mark, because it takes that long for the plot to get even close to being explained.

The movie is only an hour and 40 minutes long. That's not long for most comic book movies these days, but Elektra limps through that time like a gazelle with four broken legs. It's painfully slow — the first 20 minutes are devoted to Elektra wandering around her house. This is the first movie I've ever seen where OCD is given to a character for the purpose of product placement. An excruciating 30 seconds are devoted to this:

Get that Rite Aid money, Elektra. God knows you won't be getting it from your box office.

Elektra has plenty of time to show its hero straightening up, but somehow almost no time to actually name its characters. Without IMDB or existing knowledge, it would be nearly impossible to know the names of the villains. And the characters who do have names have their names repeated incessantly. I lost track of how many times Elektra was referred to, especially by the villains, as "the female, Elektra". She's the one we know the name of, my god.

Everything about this movie is endlessly, painfully, flat. It's less of a movie and more of a crepe. I don't know if Jennifer Garner was given tranquillisers before every take, but her entire performance is like she's fighting to stay awake. All her lines are given in a drawn-out monotone.

Try to emote just a little when you strangle a child.

She's not alone. All the actors, save Kirsten Prout as Abby, are so stilted in their acting, it must have been the director's choice. Instead of giving the impression that these characters are in control of themselves and talking about matters of grave importance, you get the impression that everyone is trying to read off of cue cards 10km away.

Elektra isn't just badly acted and written, it's also visually awful. It is ugly. It randomly speeds up and slows down. Major parts of the climax consist of Elektra flashing back to things we saw only a few minutes before. Save Elektra's iconic red outfit, everything else is black, white, grey and beige.

Elektra is also a sonic nightmare. The music cues are both jarring and generic, at once. I think they do that to make sure you can't actually fall asleep. Every time I found myself drifting off, the sound mix would suddenly blare with either music or a scream, forcing my attention back to it.

The fighting choreography, which is the one thing you'd think that a movie about ninjas would try to do well, also completely fails to impress. No one looks like a badarse. They barely look competent. Here's Elektra, literally unable to fight her way out of a sheet:

With the film's utter awfulness, it's hard to pick out a single worst moment in it. Still, if I had to choose my vote would be the introduction to Elektra, where her hair blows into Garner's face for an incredible 10 seconds. No, not the usual heroine/supermodel pose, where the wind blows the hair back for dramatic effect. This is full 10 seconds where I fully expected her to try to blow it out of her face before it stuck to her lipgloss:

Followed, of course, by her arse:

Nothing about Elektra works. Every single aspect — acting, writing, directing, sound, visual effects — is the worst possible choice. And yet, it's not funny bad. I wasn't laughing. After the first 40 minutes, I wasn't even furious any more. Instead, I was kept checking the clock for when it would be over. The despair that overcame me that there were still 60, 50, 40, 30 minutes left cannot be replicated. Elektra is excellent proof of the relativity of time.

So take heart, Elektra fans. There is literally no way that Netflix's Daredevil could ever do worse to this character than she has already endured.