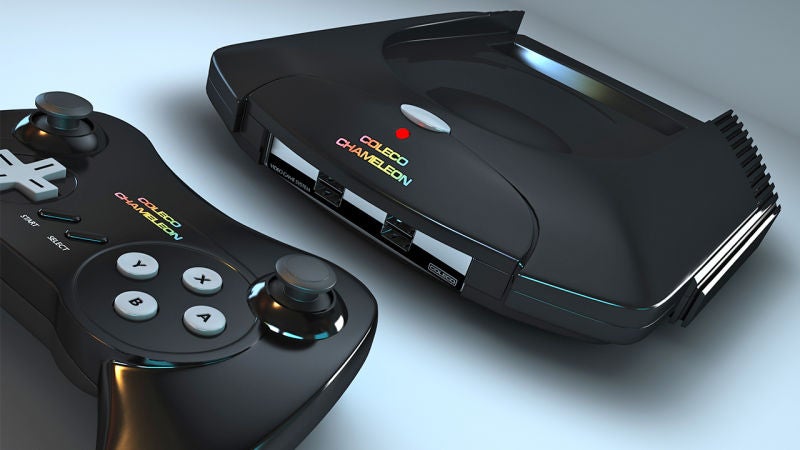 The Coleco Chameleon is a video game console promising to take a stand against downloadable content (DLC) by shipping non-upgradeable cartridge games just like systems from the 1980s and 1990s. Unfortunately, the Chameleon may never see the light of day.

We have decided to delay the pre-sell, i.e. Kickstarter, campaign in order to finalise our prototype and work with developers on having the best possible content," said Retro VGS in the post. "We'll keep you posted on any major news on our Facebook page and will let you know when we launch a pre-sell program leading up to the Christmas season.

The delays don't come as much of a surprise to anyone that's been following along. As we noted in our New York Toy Fair post, Retro VGS announced the project in early 2015 after acquiring the original toolkit for the 1990s gaming system, the Atari Jaguar. The project was later cancelled due to crowdfunding issues and complications that occurred while building the initial prototype.

RetroVGS's failed IndieGoGo campaign brought lots of scepticism about its newly rebranded Coleco Chameleon launch plan. When I asked RetroVGS co-founder Mike Kennedy about the apparent scepticism the company was facing, he brushed off many of the concerns. I asked him specifically about accusations that he'd actually fit an SNES board in an Atari Jaguar case at the New York Toy Fair. Here's exactly what he said:

"Often times with early prototypes/proof of concepts hardware designers utilise salvaged "legacy" parts. Since our HDMI output (our standard output) wasn't quite stable enough to get us through the show they opted to use a SNES connector to allow us to quickly get Composite output just to use for the show demonstration. It was however, running on our software. As we have told everyone, when the Kickstarter campaign is up, it will clearly show a more near production prototype and boardset (something my team has continued to work on before), during and now after Toy Fair has ended."

Now that February 26th has passed on the Kickstarter campaign doesn't appear to be coming anytime soon, it's getting harder to believe the viability of the new gaming console. We reached out to Mike Kennedy for comment and will update when we hear back.