Graphene Patterned After Moth Eyes Could Give Us 'Smart Wallpaper'

Tweaking the structure of graphene so that it matches patterns found in the eyes of moths could one day give us "smart wallpaper", among a host of other useful technologies. Using a novel technique called "nano texturing", scientists at the University of Surrey in England have successfully modified ultra-thin graphene sheets to create the most efficient light-absorbent material to date, which is capable of generating electricity from both captured light and waste heat. They described their work in a new paper in Science Advances.

Graphene is often touted as a wonder material because of its many useful properties, most notably its excellent electrical conductivity and remarkable mechanical strength. This makes it promising for any number of practical applications (a big part of why it proved Nobel-worthy in 2010). Here, let the good folks at SciShow explain:

Graphene also has interesting optical properties — namely, it's sensitive to many different frequencies of light, ranging from ultraviolet and visible light to the entire infrared spectrum. There's just one problem: Because it's just a single atom thick, graphene isn't particularly efficient at capturing light and heat. So its potential for future optoelectronics applications has been limited to date.

The University of Surrey researchers addressed this problem by looking to nature. Moth eyes absorb light particularly well, which helps them evade predators looking for a telltale glimmer of reflected light. That is due to tiny bumps on the eyes, arranged in a hexagonal pattern, that work much like sound-proofing foams in architecture — except instead of preventing echoes or sound reflections, those bumps prevent the reflection of light. 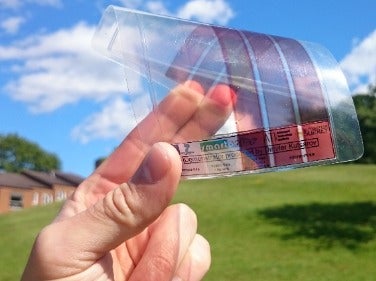 "Moths' eyes have microscopic patterning that allows them to see in the dimmest conditions," co-author Ravi Silva said in a statement. "These work by channelling light towards the middle of the eye, with the added benefit of eliminating reflections, which would otherwise alert predators of their location. We have used the same technique to make an amazingly thin, efficient, light-absorbent material by patterning graphene in a similar fashion."

By doing so, they were able to boost the light absorption capability of graphene sheets from a mere 2 to 3 per cent, to a whopping 95 per cent.

You could coat solar cells with this material to significantly boost their efficiency in collecting light, according to Silva. Or it could serve as a kind of "smart wallpaper" inside the home to capture waste heat and generate small amounts of electricity — sufficient to power certain features of future smart homes. Over the last several years, several companies have been trying to develop plastic anti-reflective coatings etched with moth-eye patterning for glare-free display screens for televisions, computer monitors, eyeglasses and windows. This new type of graphene might fill that niche.

But first the Surrey scientists will have to demonstrate that this new graphene-based material can be incorporated into existing cutting-edge technology.

[University of Surrey via Nanowerk News]