Five years ago, a 9.0 undersea earthquake shook Japan. It was the most powerful earthquake ever recorded in the country, and it was followed by devastating tsunami waves, killing 15,894 people. The tsunami caused level 7 meltdowns at three reactors in the Tokyo Electric Power Co.’s Fukushima Daiichi Nuclear Power Plant complex, resulting in the largest nuclear disaster since the Chernobyl explosion.

The incident forced 100,000 people to leave the contaminated areas, and the decontamination and decommissioning process at the TEPCO’s embattled nuclear power plant is still well underway. Getty photographer Christopher Furlong took a tour inside the disaster area, and shot stunning portraits of the employees who work at the plant. Unlike the majority of the Chernobyl liquidators, these people are trained professionals not risking their health — but it’s still creepy to look directly into their eyes. 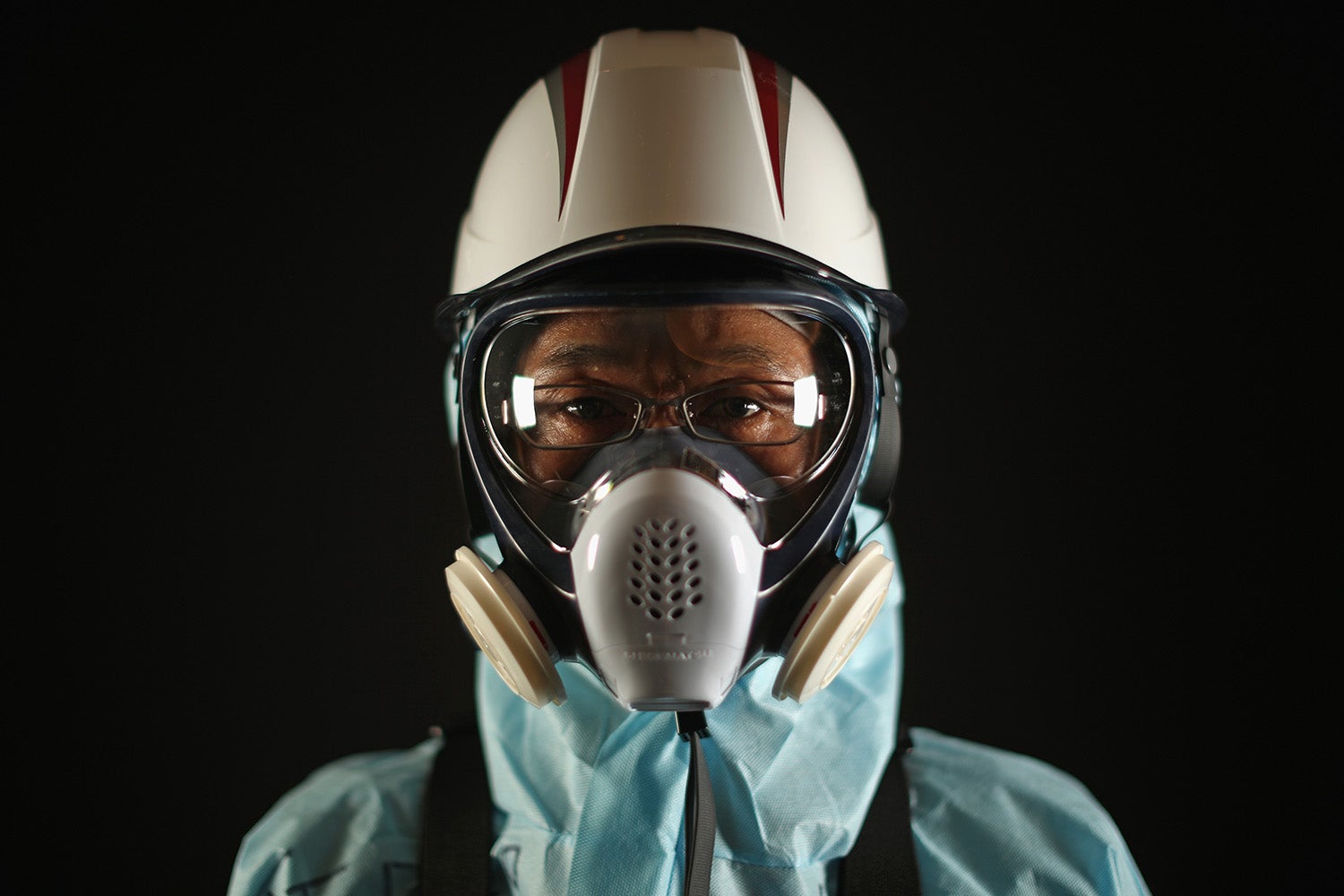 Yasushi Ooishi of TEPCO works in the team to handle the contaminated water. Oishi says decommission is something his people must do and only his people can do. Oishi wishes the process was quicker, but there are obstacles and his teams cannot do everything as they wish when cooperating with the government officials and local communities. 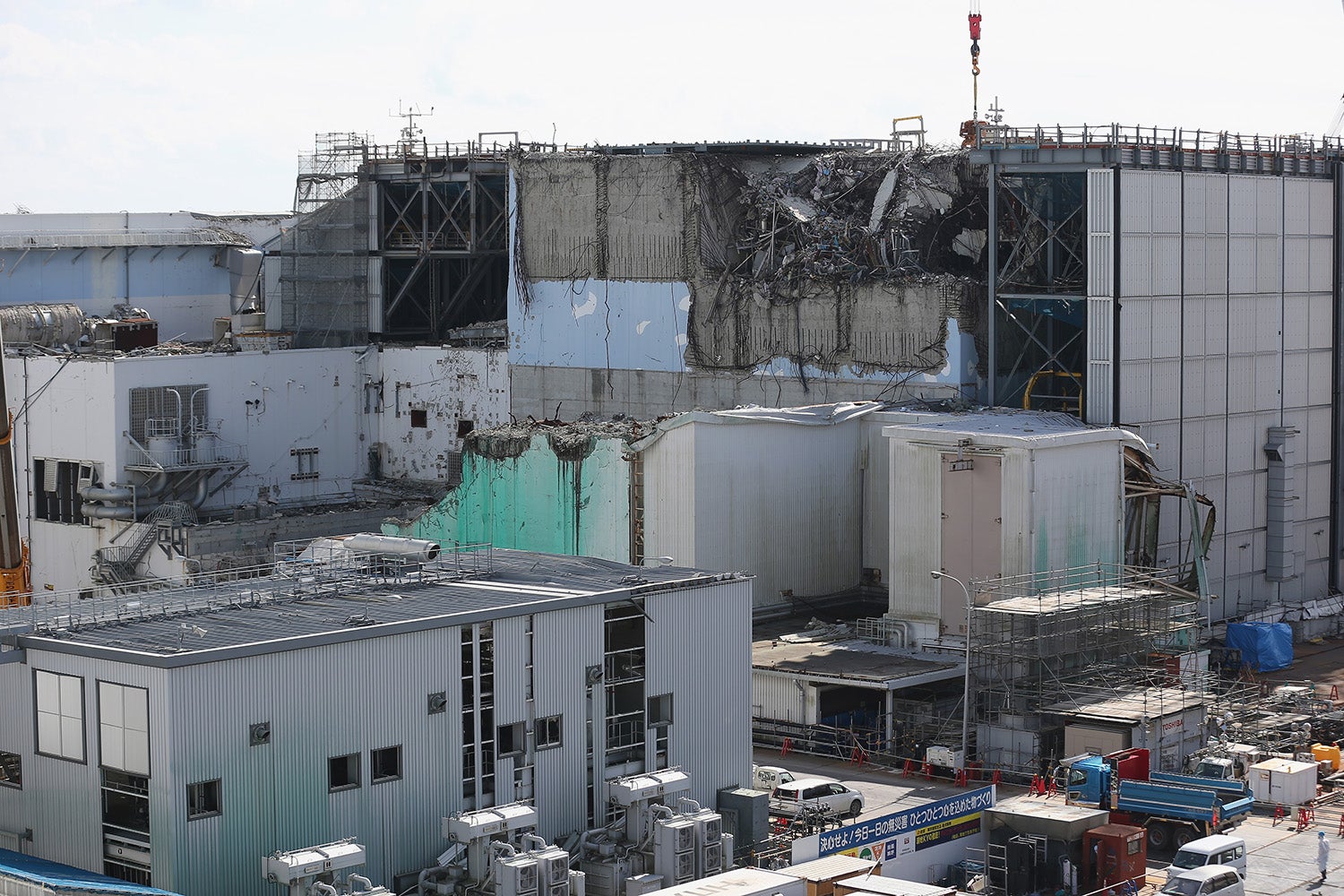 A general view of damage to No. 3 reactor building at Fukushima Daiichi nuclear power plant. 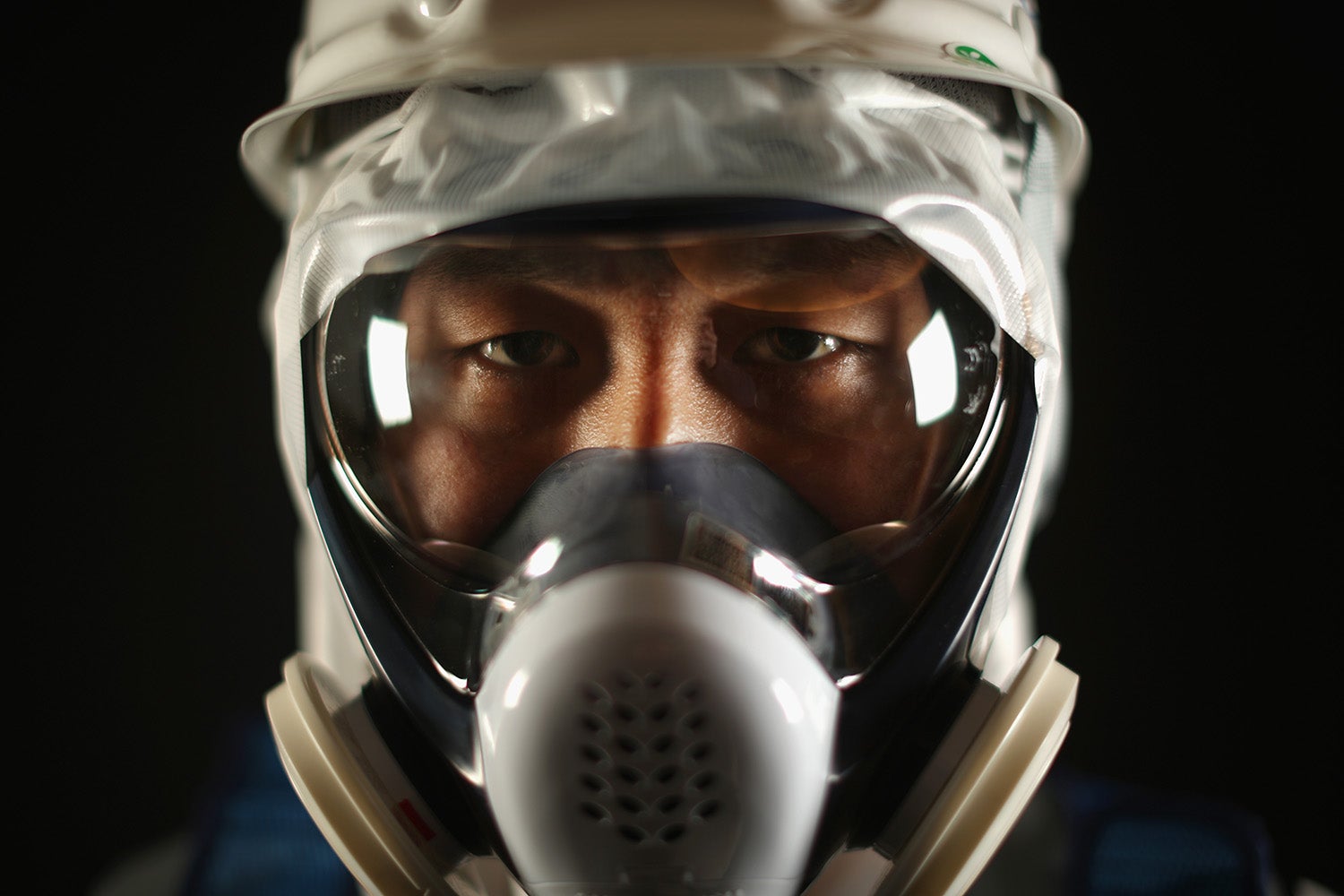 Shinichi Koga of Kajima Corporation works on the project to build the ice wall that blocks the groundwater flow from the ocean side into the power plant. Koga says that the difficult part of his jobs is the environment where he has to wear these protective gears, and there are many restrictions and his tasks require him to ask for permissions from the regulation authorities to proceed. 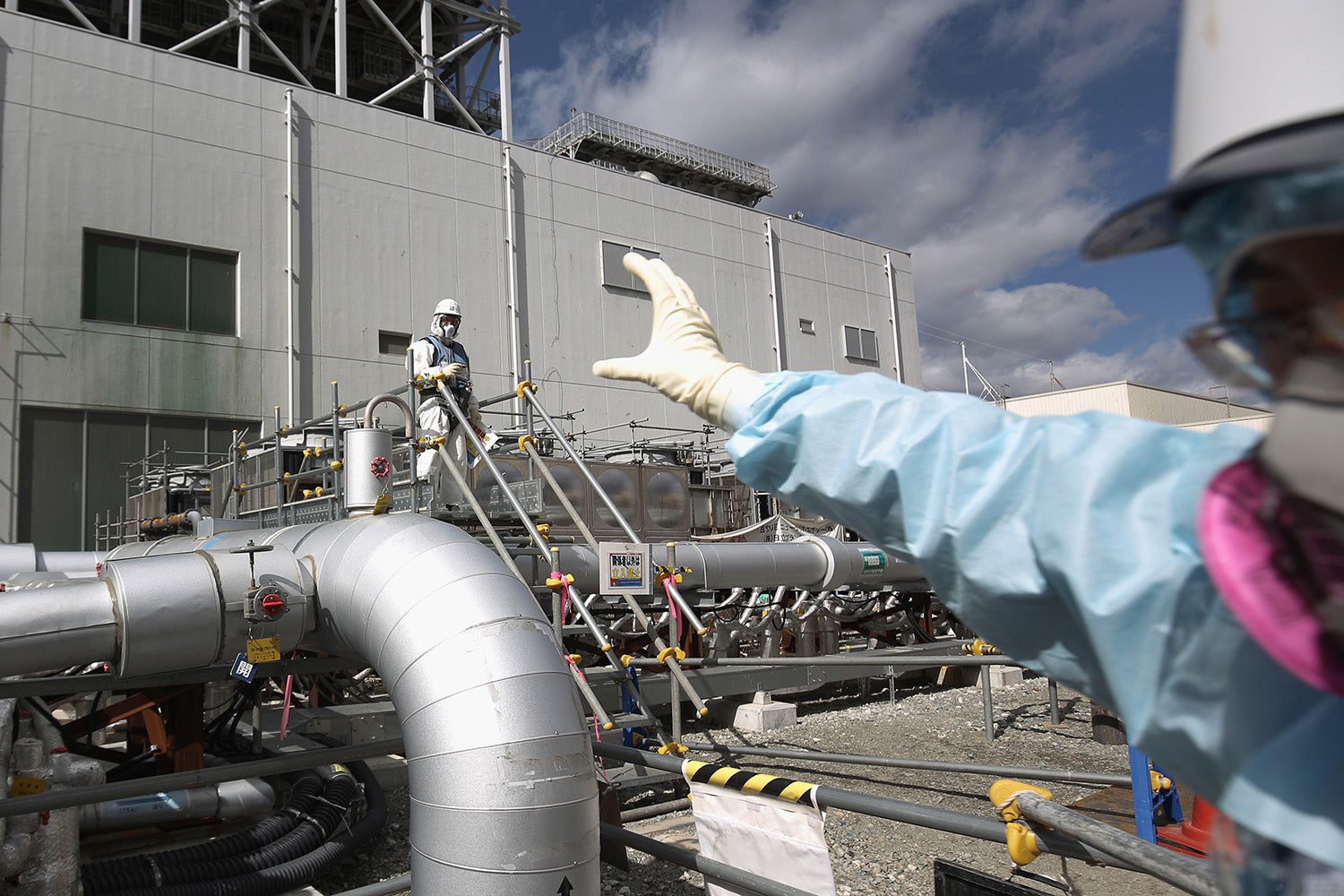 Employees work on the construction of the ‘Ice Wall’ which will use coolants to create a 30 meter deep wall of ice to prevent groundwater from leaking into the reactors. 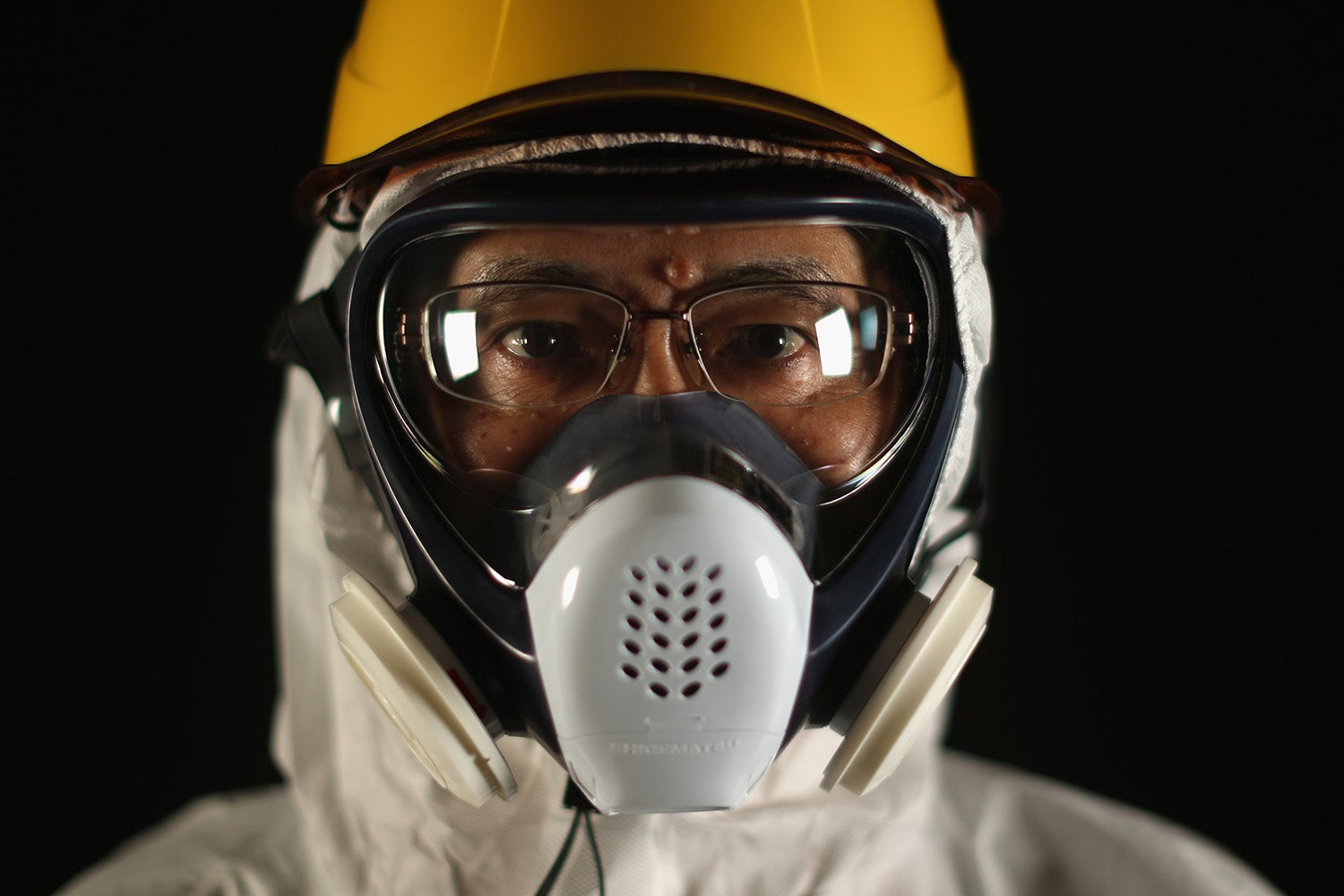 Mitsuyoshi Sato of Toshiba works in the team that operates the vacuum-cleaner-like robots that decontaminate the reactor No. 2 and No. 3. Sato has been working in Fukushima for five years as he voluntarily offered to move to Fukushima to do research on water purification five months after the accident. Once that project is settled, he again offered to continue in the decontamination project. Sato says he is too busy to think about the meaning of his job, and he has other things that he wants to work on as a researcher, but he feels his job is something that has to be done now. 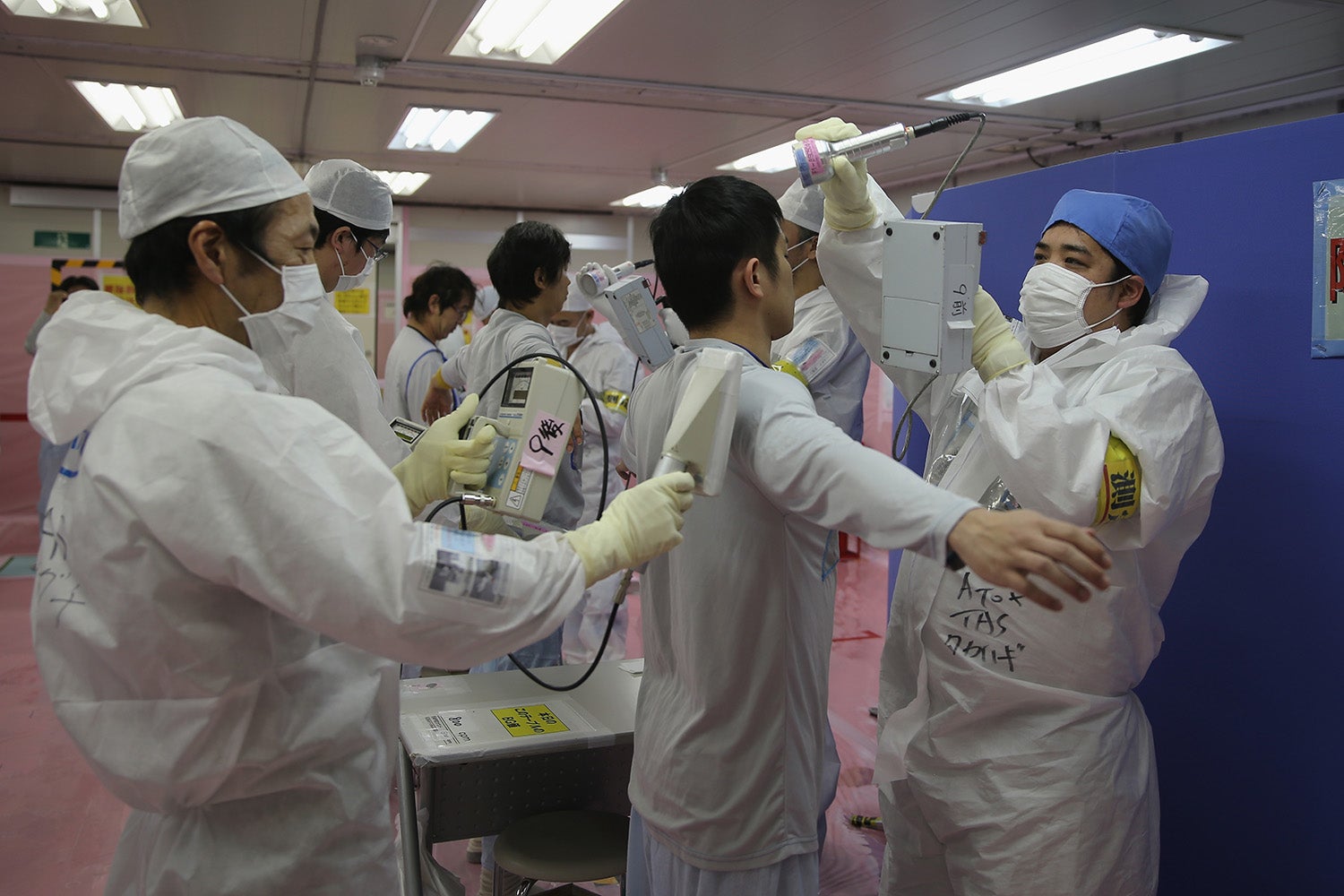 Workers are scanned for radiation exposure after returning from working outside at the power plant. 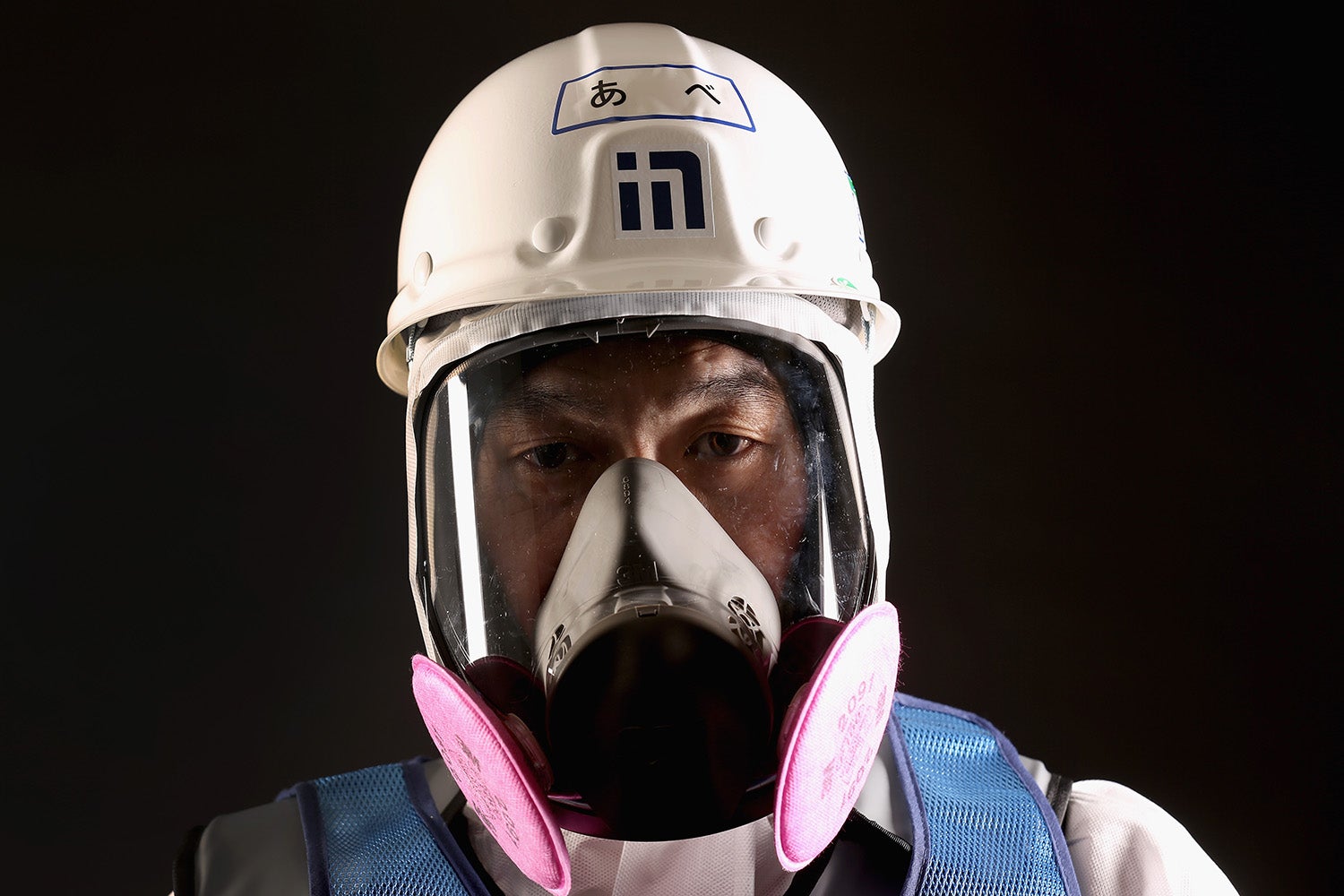 Isao Abe of Kajima Corporation works on the ice walls to block the groundwater flow from the sides into the power plant. Ever since the disaster happened, his colleagues were assigned to work at Fukushima Daiichi, so Abe knew that his turn would come soon or later. Abe feels it is such an important job. 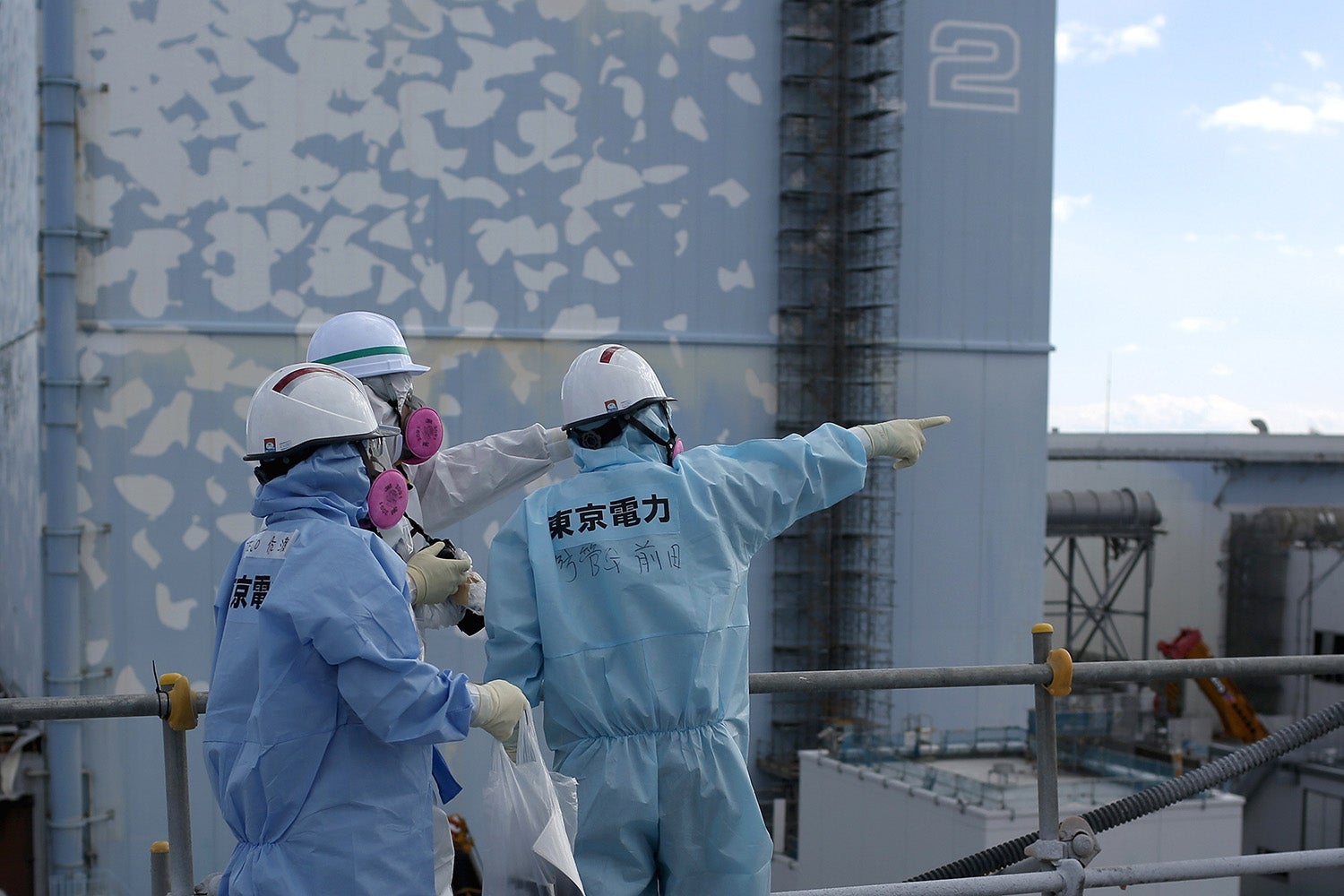 TEPCO employees show a member of the media the decontamination and decommissioning process. 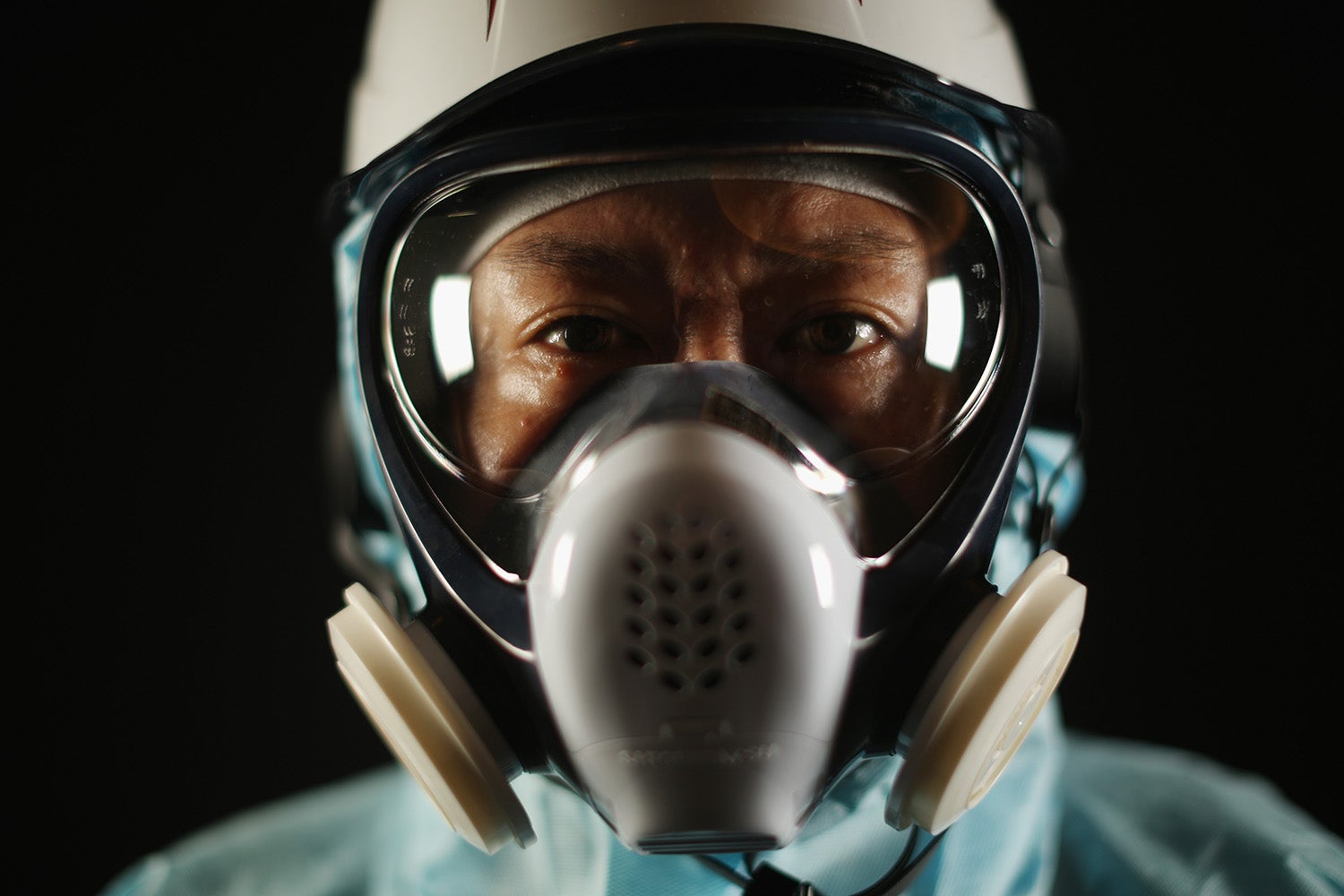 Kenji Shimizu of TEPCO is the onsite supervisor for the robotics project which is charged with locating fuel debris in the reactors. Shimizu says they make sure to work in the safe environment, so he rarely feels any danger working at the Fukushima Daiichi, but feels it is difficult for people to understand. He feels they need to continue making progress safely. 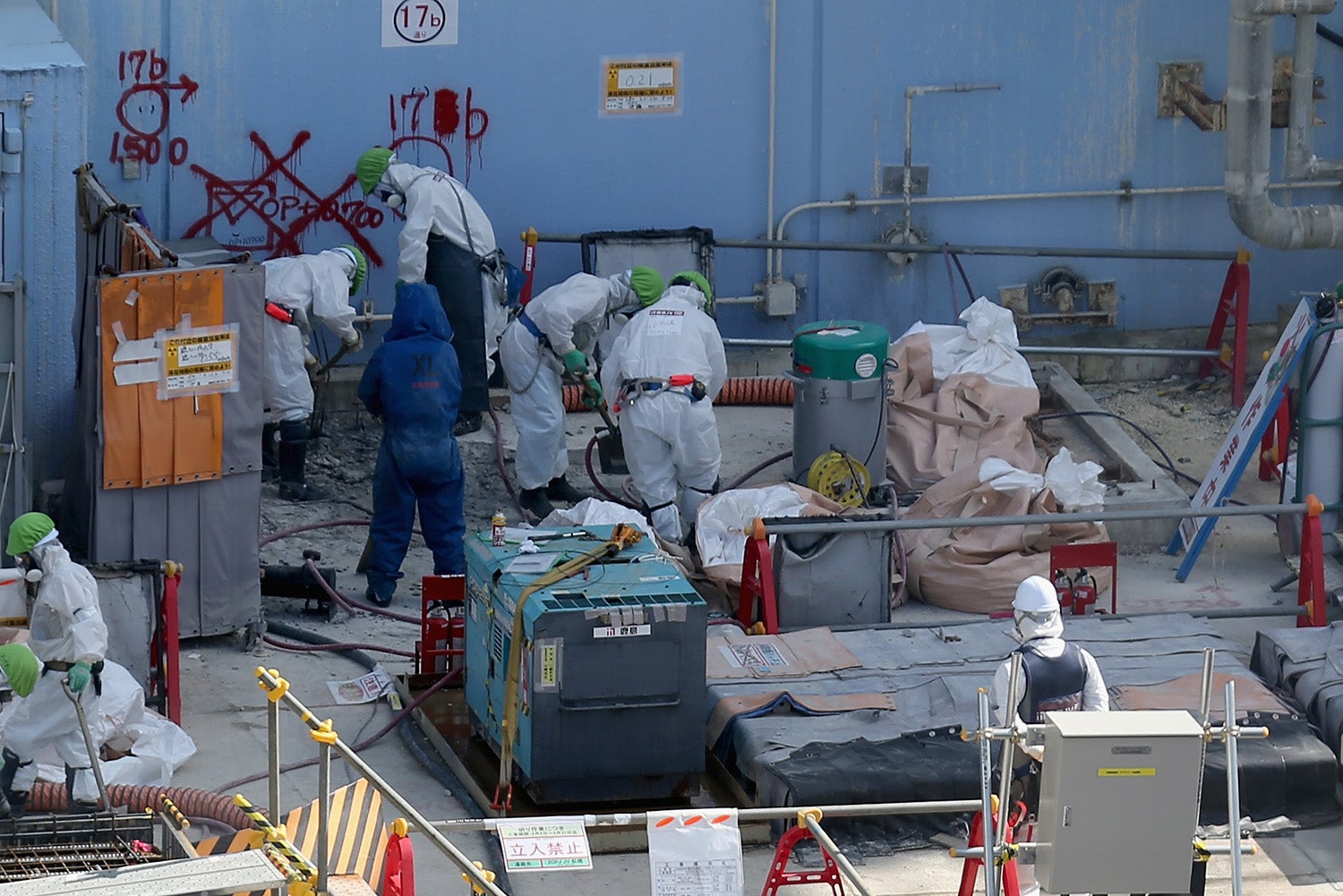 Workers continue the decontamination and reconstruction process at the base of the reactors. 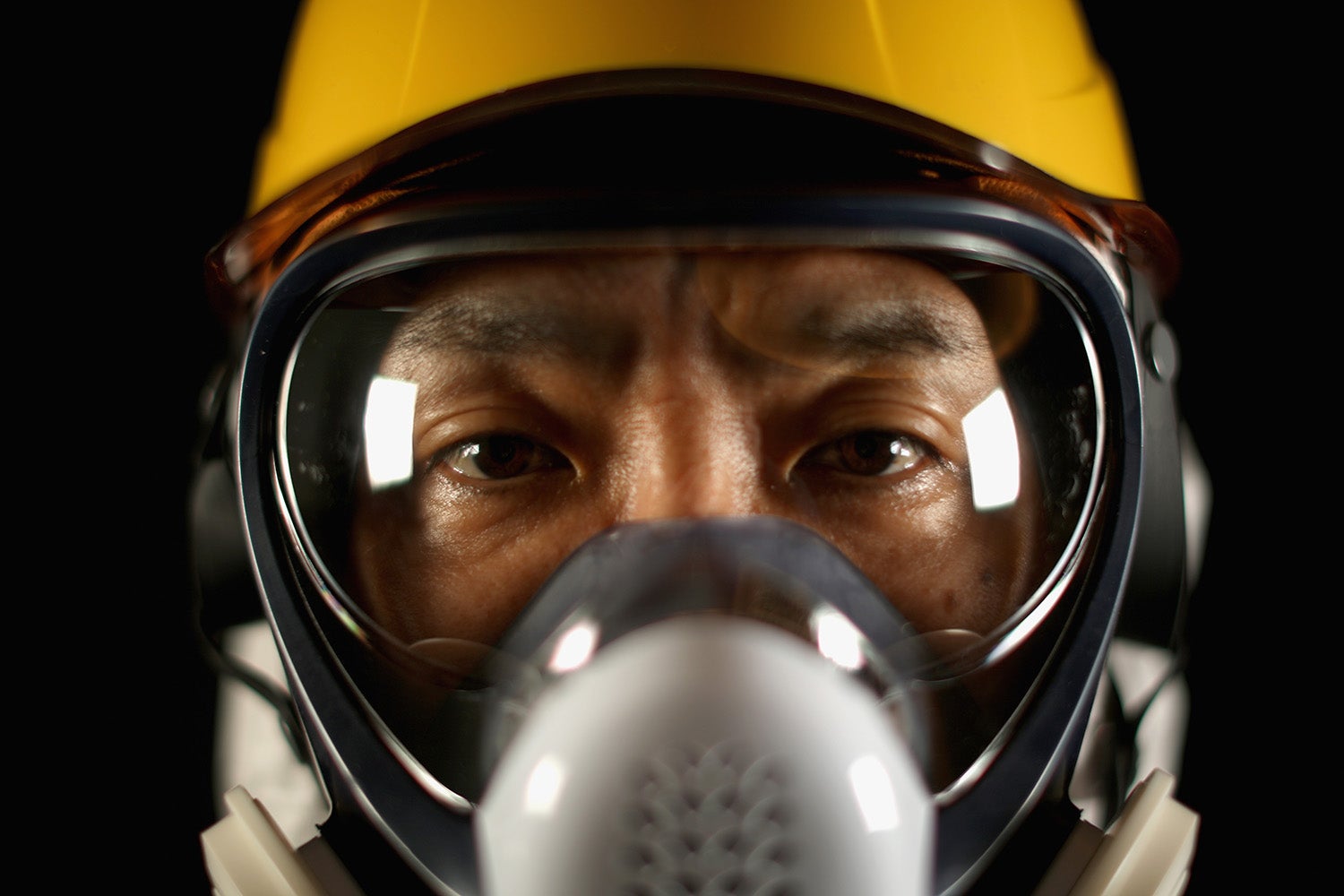 Shuji Hoshii of Toshiba works on the operation side of the water purification system. Hoshi says the support of family has been really important as he lives away from home. 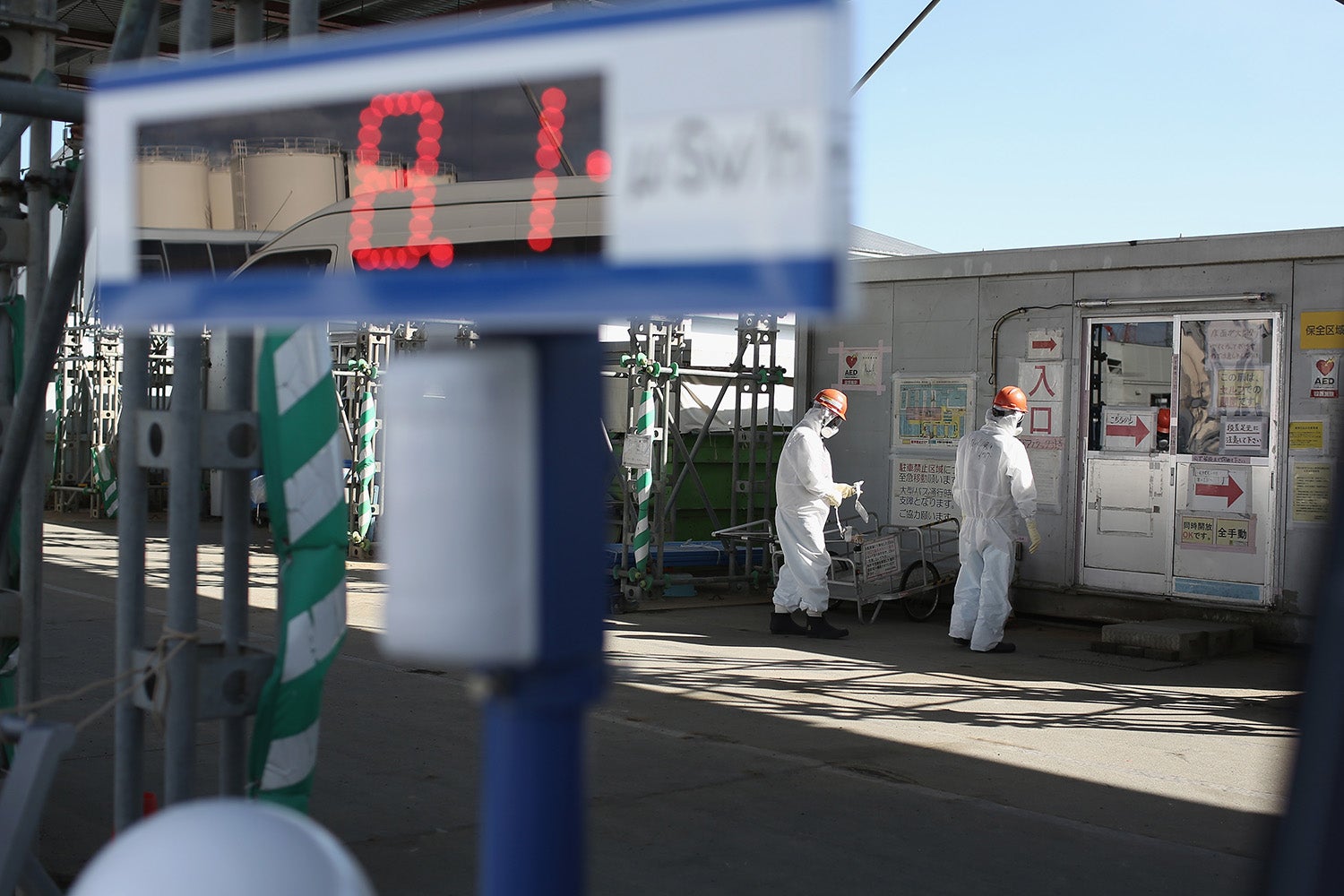 A radiation monitor sits outside the anti-seismic building as the decontamination process continues. 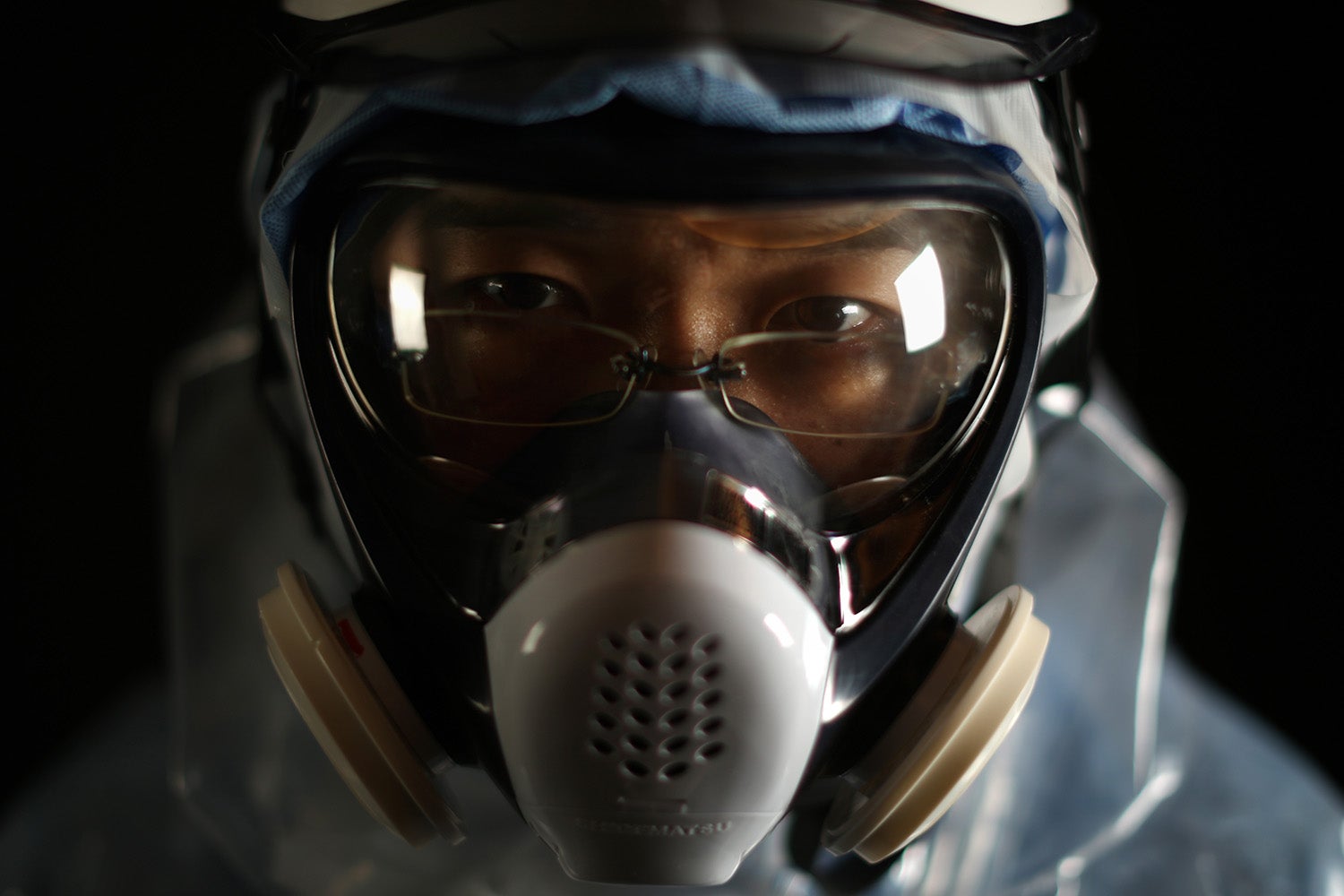 Yusuke Nakagawa of TEPCO works on the team that operates the robotics used to decontaminate in the reactor buildings. Nakagawa says he wants to contribute to the recovery of Fukushima, He says decontaminating the reactors is the crucial task needed to proceed the reactor decommission, the most important issue of Fukushima Daiichi. 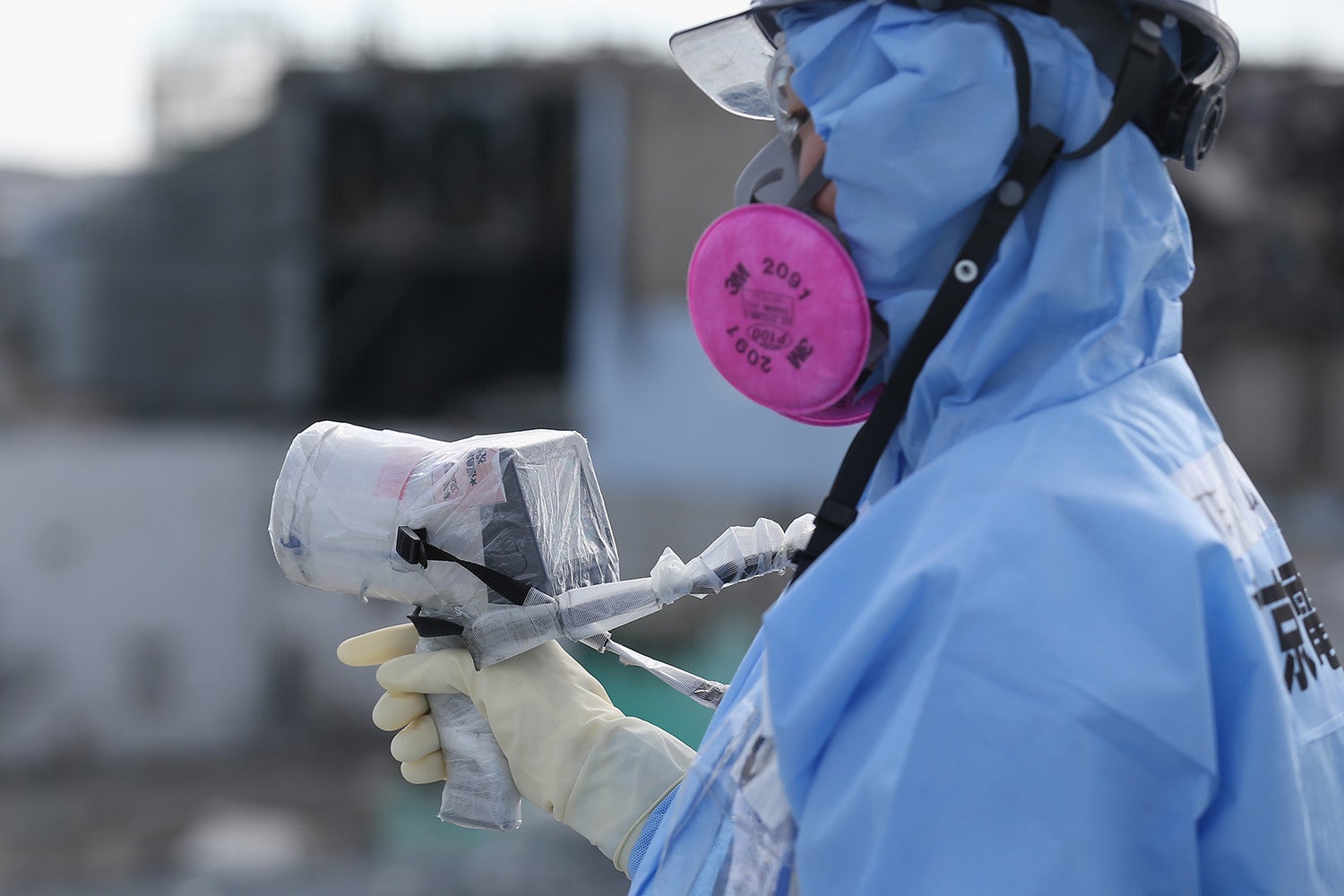 An employee uses a a radiation dosage monitor as workers continue the decontamination and reconstruction process. 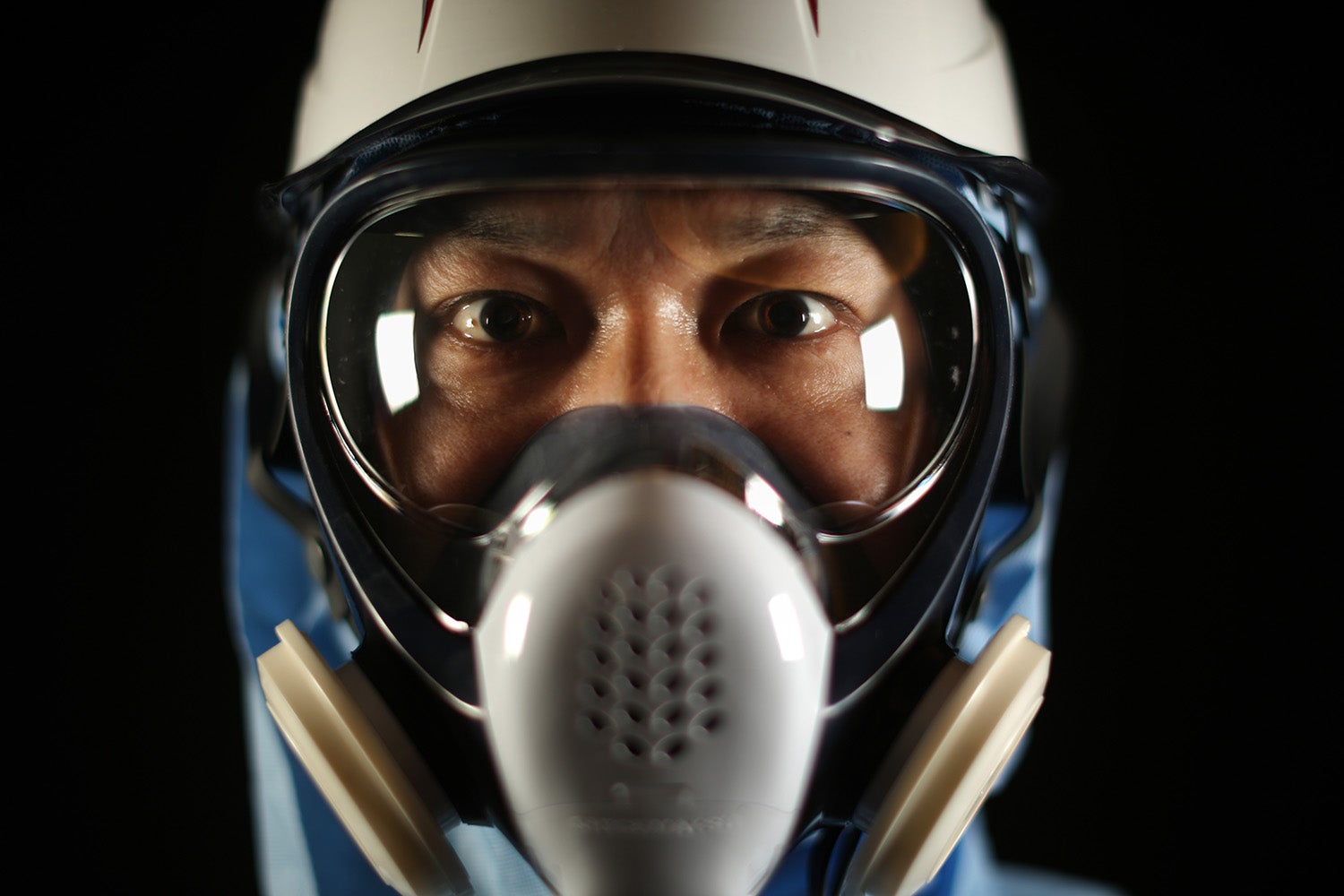 Kei Kobayashi of TEPCO works on the water purification system. Kobayashi says the whole experience has been rewarding as he learns something new every day. 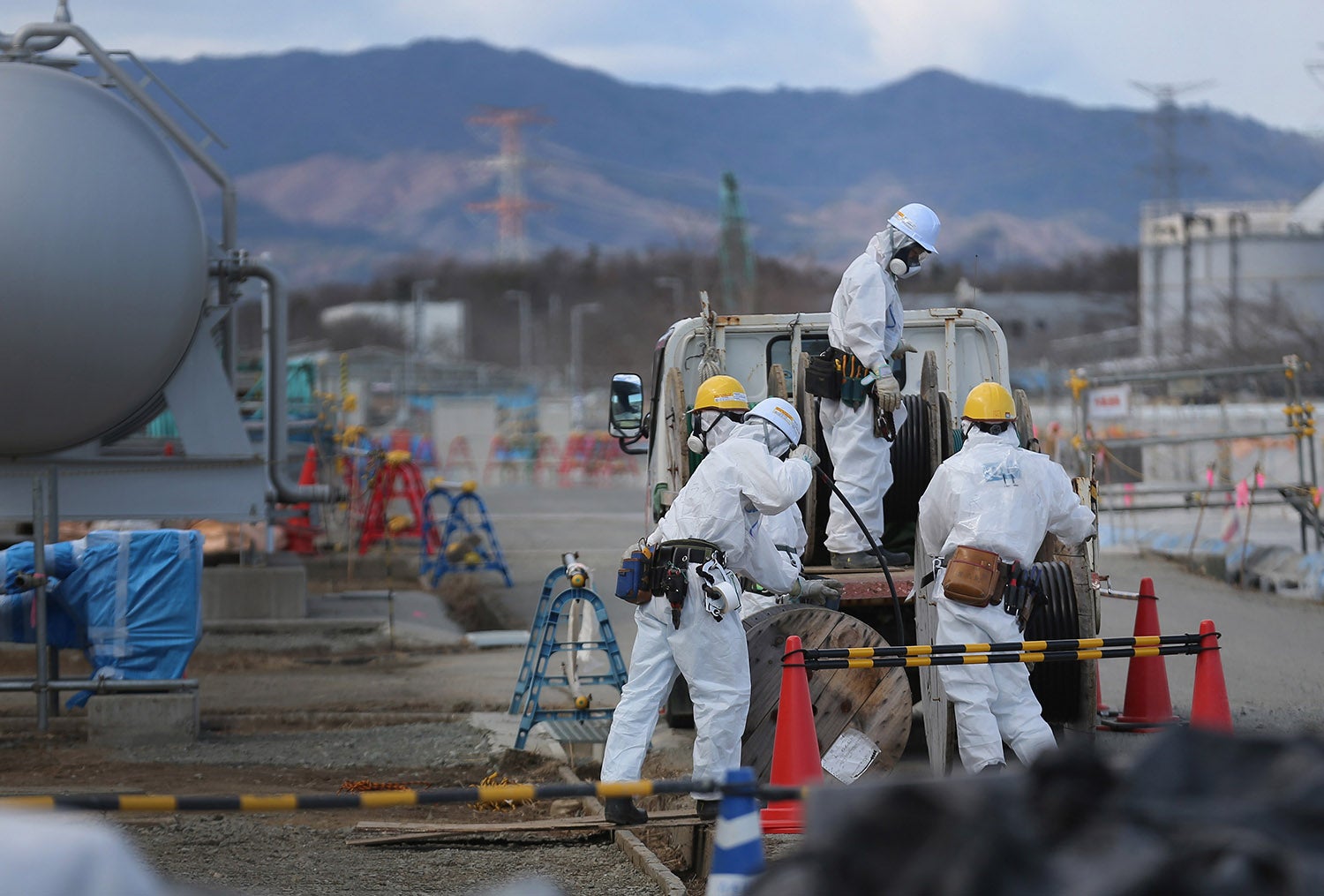 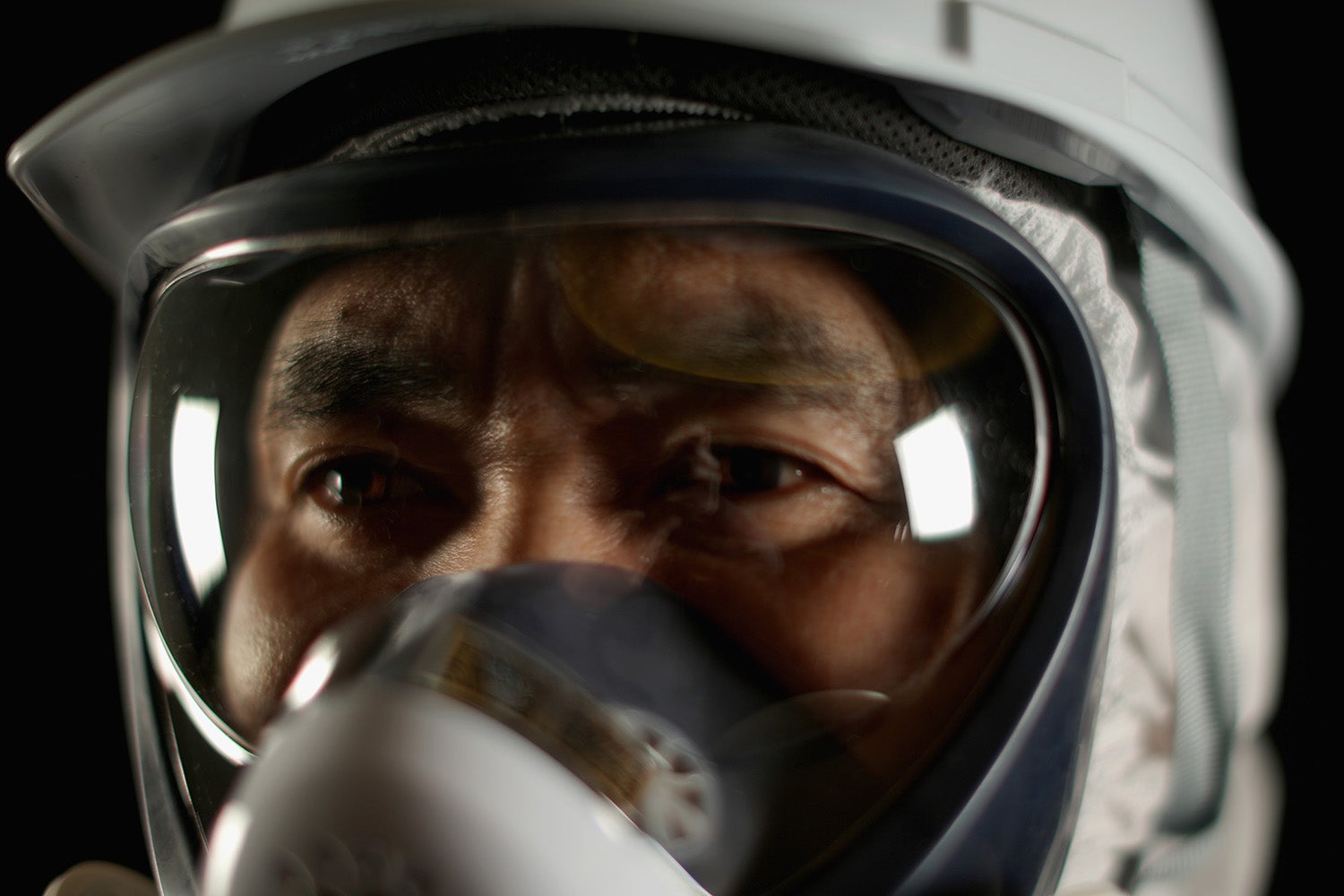 Eiji Sakata of TEPCO works on the team that oversees overall safety control in construction sites. Sakata says the safety control in Fukushima Daiichi is more difficult than other places as workers have to memorise everything — they cannot freely take the documents in and out of the site. Verbal communication is harder as the workers are always wearing masks. 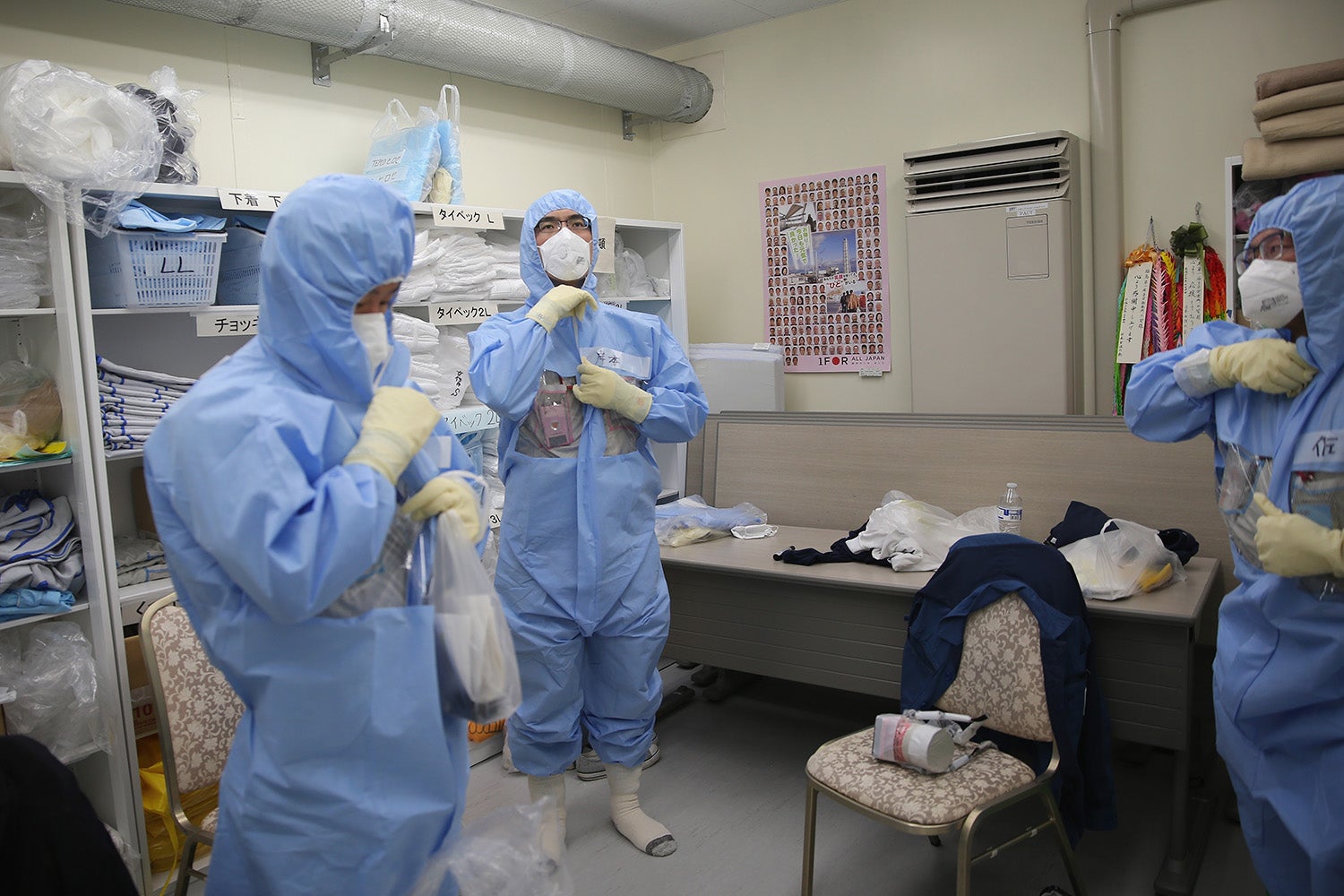 Workers get changed into their protective clothing inside the anti-seismic building before working on the radiation decontamination process. 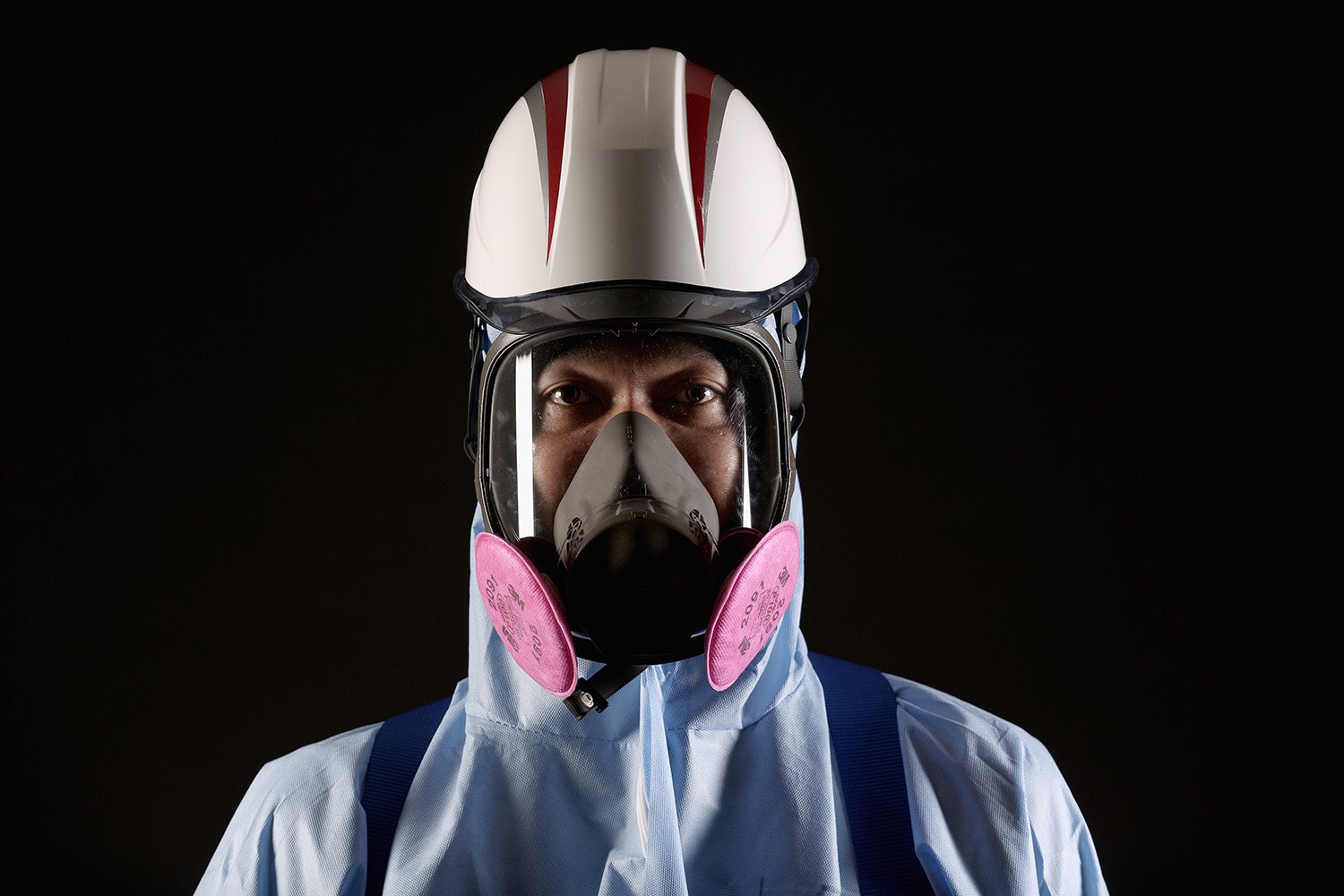 Hideaki Tokuma of TEPCO manages the contaminated water tanks. Tokuma says he feels his job is challenging and rewarding. Tokuma says there is no routine work and every issue is new. 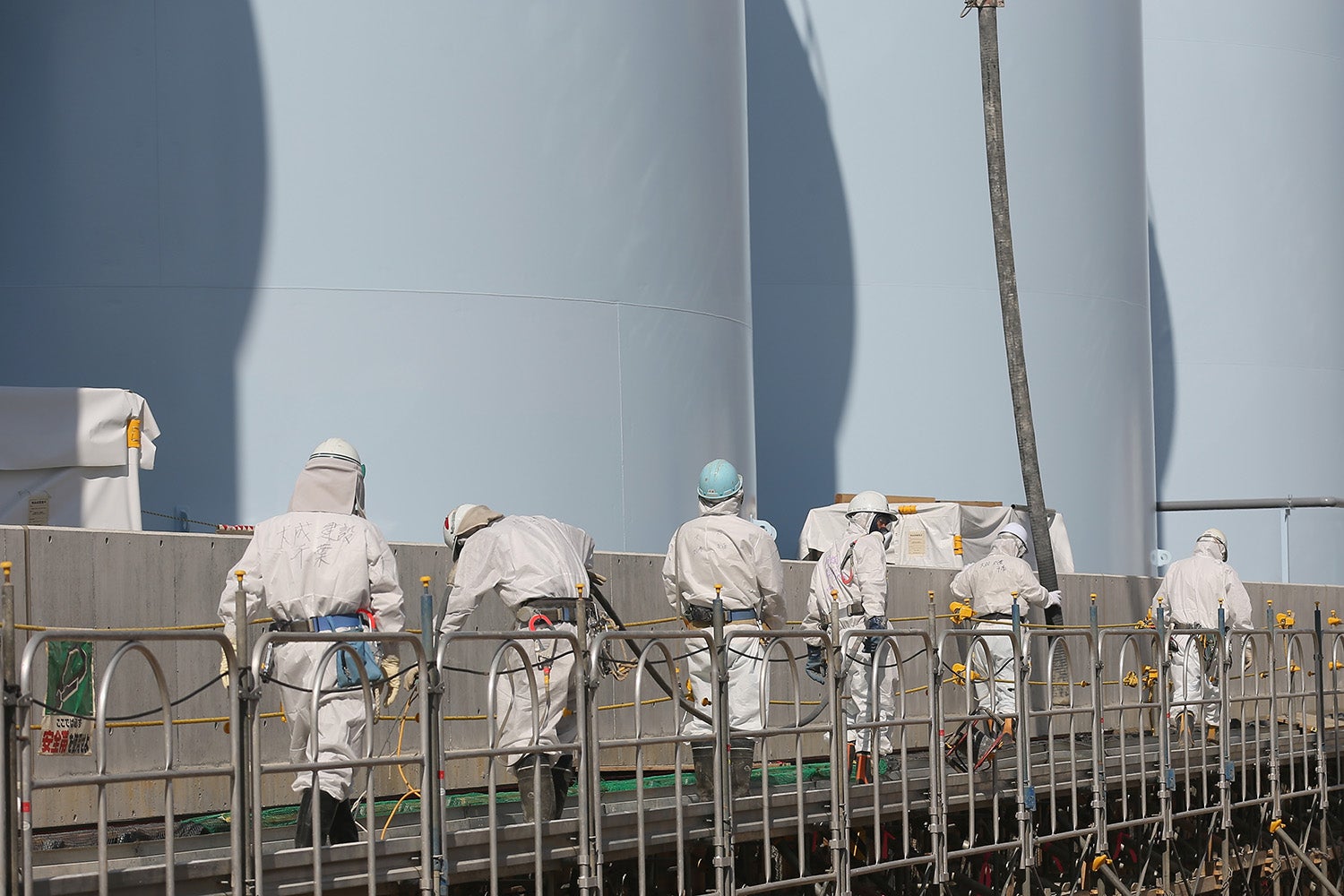 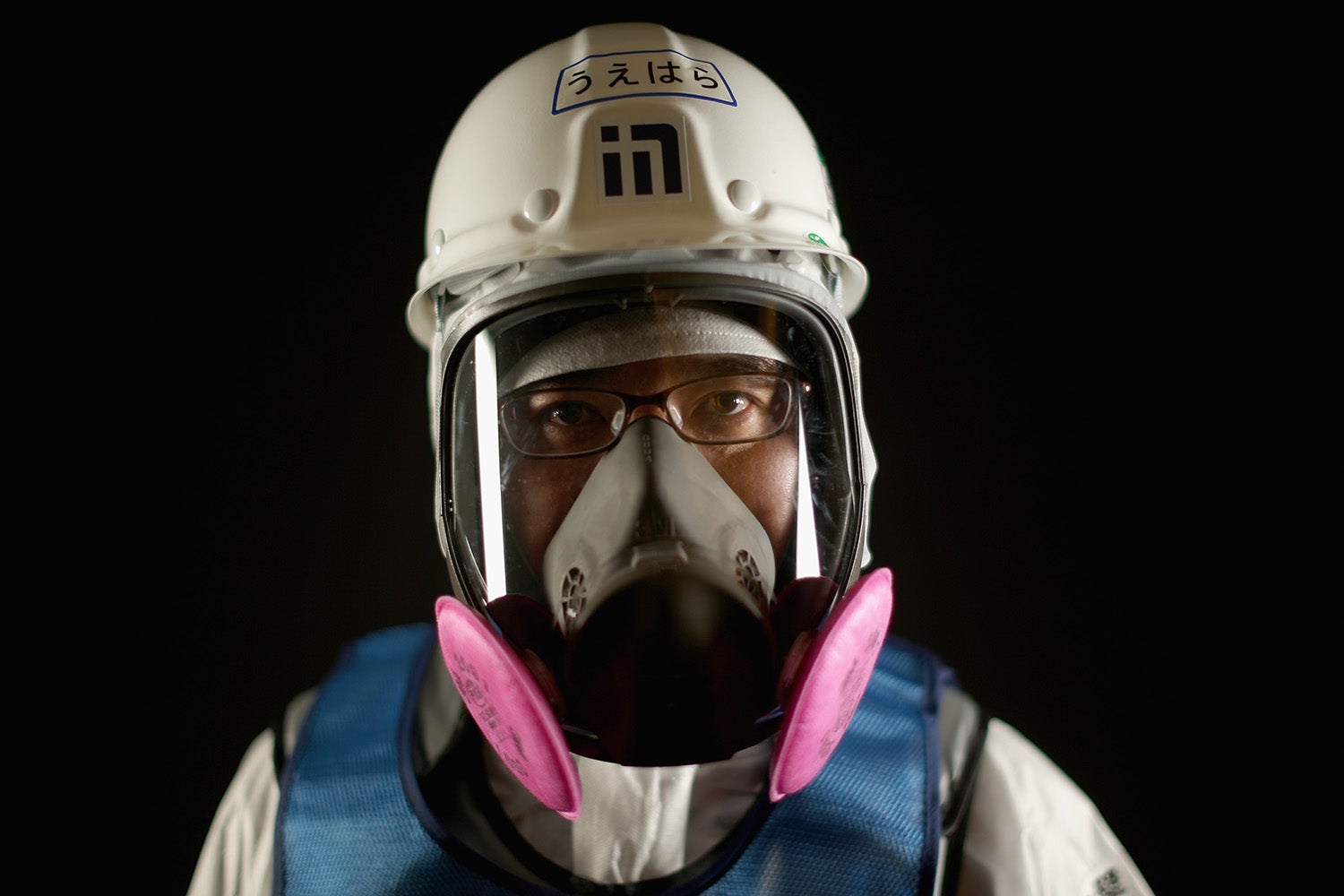 Masaya Uehara of Kajima Corporation works on the project to build the ice wall that blocks
the groundwater flow from the mountains into the power plant. Uehara says It is disappointing when some people have negative opinions about his job, but at the same time, it is encouraging and makes him want to prove them wrong.
Share this Story
Get our Newsletter Subscribe
There are no more articles to be viewed