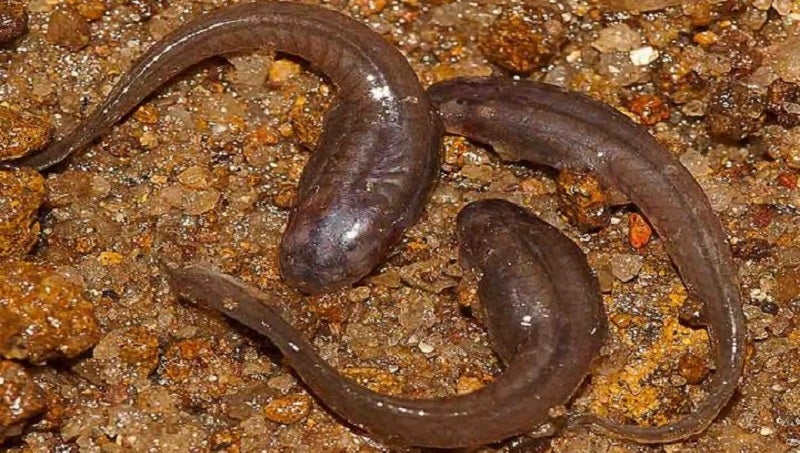 Scientists have documented Indian dancing frogs for over a century. For that century, they have found only adult frogs. At last, a team of biologists have found the tadpoles that develop into frogs — and they have found them underground. Micrixalus herrei, one of a number of "dancing frogs" in India, spends its days in fast-moving streams. It gets its name from the fact that it extends its arms and legs in a sort of stylised dance as a way to get the attention of potential mates. It's gotten the attention of many biologists over the years, but its life-cycle has remained mysterious. No one had ever seen the tadpoles in the streams and ponds the frog frequented.

This turns out not to have been surprising. The tadpoles didn't live in the water. They were underground. A group of scientists from University of Delhi, University of Peradeniya, and Gettysburg College found these tadpoles burrowing in the sand beneath the streams.

These tadpoles live an "entirely fossorial life", meaning they spend their entire youth burrowing and only emerge onto land once they have achieved their adult forms. As they burrow, they take in sand and digest the organic matter within it.

The tadpoles are adapted for their underground life. They're more muscular, so they can fight their way through the sand. They have ribs, which is rare for frogs. The ribs give the muscles reinforcement and protect the internal organs from the pressure of the sand. Living their lives underground, they have no use for eyes, so their eyes develop later than those of other frogs. Those eyes still need to be protected, which means that the tadpoles have thick skin over each eye-bud. Finally, they have what are called "lime sacs" — sacs containing calcium carbonate, the mineral that helps build bones and shells.

Only in late metamorphosis do these blind, eel-like things venture out of the ground. At that point they look like frogs with tails. That tail shrinks, the frog gets bigger and eventually it's dancing around, trying to find a mate and make blind, burrowing eel-babies of its own.