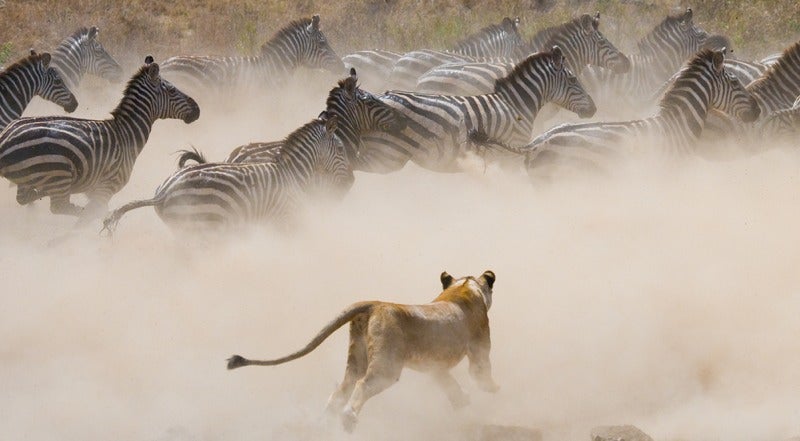 On the surface, herds of zebras roaming the Serengeti don't seem to have much in common with the number of cells in our bodies. But what if there is an underlying hidden logic behind it all — a set of universal rules regulating the numbers of things that applies across all size scales? That's the provocative thesis behind The Serengeti Rules: The Quest To Discover How Life Works and Why It Matters, the latest book from renowned biologist Sean B. Carroll. Gizmodo recently caught up with Carroll to learn more about this intriguing idea.

Gizmodo: What inspired you to write this book? Apparently it started with a trip you took with your family to the Serengeti in Tanzania, Africa.

Sean B. Carroll: That's right. At the time there was a debate raging over whether to put a paved road through the Serengeti that would serve as an extraction route in Western Tanzania. This is a world heritage site with the last great migration on the planet. Roads are not a great thing for that. I thought I should at least go see this place, and bring my family. Even though I'd read about it, and seen it on TV and in the movies, it's a whole different thing to get there and see more magnificent animals than your mind could imagine. The numbers are overwhelming.

It got me thinking. I'm an indoor biologist. I spent my career taking apart genes and trying to figure out how animals are built as embryos. I'm gazing out across the Serengeti, and I realise I have no idea how it all works. Why are there a million wildebeests and only 1000 topi, when they're about the same size? Fortunately, I found a book by [zoologist] Tony Sinclair, who spent five decades studying the Serengeti. His story led me to other stories about the pioneers who figured out how animal populations are regulated at all these different scales, and what that might mean for our future.

So, just what are the Serengeti Rules?

Carroll: It's a set of general rules that help explain the numbers of creatures in any given place. It deals with the interactions between creatures, the roles of predators, herbivores, grazers, and plants. These rules explain what's known as the pyramid of numbers. Why is there one tiger and 50 deer, but 10,000 mice and 40,000 trees in a place? As you go up the scale from plants to the things that graze on plants, to the things that feed on the things that graze on plants, the numbers always get smaller. I named them the Serengeti Rules, but I could just as easily have named them the Lake Erie Rules, or the Monterey Bay Rules. 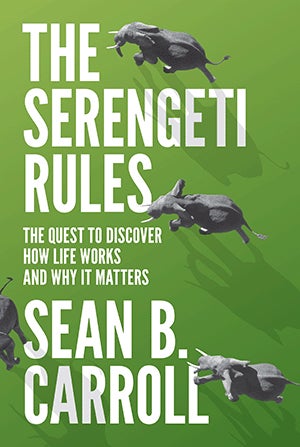 I was struck by a quote at the start of one your chapters: "Anything that is found to be true of E. coli must also be true of elephants." It's kind of astonishing that these rules work at so many different size scales.

Carroll: The mechanisms are different but the logic is pretty much the same, even at different scales. It's all about buffering changes in both directions: not too many, not too few. Inside cells, production kind of works like a thermostat. As an enzyme cranks away and builds up product, the product feeds back and shuts down the enzyme. But then the product falls back to a low level — because the enzyme has been shut down — and the enzyme starts cranking away again.

Out on the Serengeti, in a backyard pond, or a tide pool, the same sort of thing happens: As the number of something increases, the resources per capita go down, and the rate of growth can go down. But when that happens, resources per individual go up, and growth resumes. I'd seen enough instances of this boom and bust cycle myself at the [cellular] scale, and when I saw these herds and the behaviour of wildebeest, buffalo, or elephant populations, I thought, "I've seen that somewhere before, that's feedback."

Have you gotten any pushback from your fellow scientists on this notion of a universal logic to life?

Carroll: I'm waiting for it! I especially thought I'd get knocked by the ecologists for over-simplifying ecology. But they have been incredibly supportive and receptive. You wouldn't necessarily find these ideas inside one book. We're always trying to describe nature the best we can, and you know, nature is a bit messy. You have to extract some general rules out of what is not always a simple system. But regulation is a fact of life. There are forces that determine the amount of anything: the number of cholesterol molecules in our bloodstream, the number of wildebeests on the Savannah.

For the longest time, scientists thought that everything was regulated from the bottom up: greenery provided the food for the first level of animals, and then those animals provided the food for the next level. But then we discovered in the 1960s and 1970s that predators from the top down were driving the structure of communities. The act of predation was influencing what vegetation grew.

Really, everything is the Serengeti. [The rules] can help us understand that spiders and wolves and sharks and lions play similar roles. You start to see some of the logic of these ecological systems.

So even those nasty mosquitos spreading the Zika virus serve a purpose?

Carroll: The explanation for mosquitos is that we've joined their food chain. Humans have boomed. There's 7.4 billion of us, and if you're an insect that feeds on blood, your best target is these two-legged animals walking around. A lot of wildlife is a lot scarcer than it used to be, and we're everywhere. We're the easy pickings. So mosquitos have essentially adapted to living near us, in our stagnant water reservoirs, and feeding off of us. We're at the top of so many food chains, but we're so numerous that we've inserted ourselves into the food chain of mosquitos. That's the tradeoff. 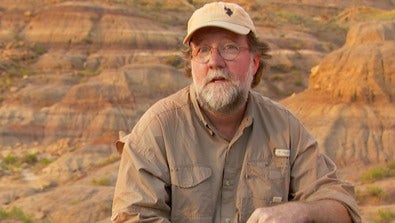 You pose a broader argument in the book for paying more attention to the disruptions in our ecosystems, lest we ultimately destroy our own sources of food.

Carroll: One of the stories I tell in the book is about these little bugs called plant hoppers that you find in rice fields. Rice is an important crop in many regions of the world. If we see bugs on rice, our first instinct is to grab the pesticide. That's a mistake. The plant hoppers will actually increase in number. How the heck does that happen? The reason is that they have built up a resistance to the pesticides [over time], so all we're doing is killing their natural enemies that keep their numbers under control, like spiders. You want to keep enough natural enemies around so the plant hoppers never grow to such significant numbers.

The oceans are another good example. It's a fish-eat-fish world, and we love the top predators like tuna and cod. We've been over-harvesting them for decades. So we're left with a lot smaller fish. About two-thirds of the massive large fish have disappeared from the oceans, while the number of smaller fish has doubled.

So these rules aren't just about wanting to make sure that Yellowstone and the Serengeti don't disappear. They're also about preserving the food chains that we depend upon for survival. You need to understand the rules and the players in the game to know when to intervene. That's just good economics, there's nothing ideological about this. If we completely deplete these stocks — zero is zero. Our collective self-interest is to manage these things well. We are subject to regulation, and we also have to regulate ourselves, because there are no natural predators out there regulating our numbers.

At least until the aliens invade.

Your book closes on a surprising note of optimism, given the damage we have wrought on the planet's ecological systems. Why are you so confident that the human race is not necessarily doomed?

Carroll: I am astonished at nature's resiliency. When we take some of the human pressure off (hunting, fishing, and harvesting), it's pretty amazing how quickly things can bounce back. Even species that were taken to the brink of extinction, down to just a few hundred individuals — bald eagles, grizzly bears, sea otters, fish stocks, or manatees — can come roaring back. The Florida alligator was declared an endangered species in the late 1960s, and you can walk across Florida on the backs of alligators today. There's millions of them.

When biologists started arriving on the Serengeti in the late 1950s, they wondered if there were enough resources to support all those animals. Little did they know that the Serengeti had been ravaged by a nasty virus that was vanquished in the next few years. The 400,000 animals they saw in the late 1950s would become 1.5 million over the next 15 years. It's the same thing that's going on now in this magnificent place in Mozambique called Gorongosa. Ten years ago, this was a place in the desert decimated by civil war and poaching, and today the number of large animals has gone from 1,000 to 71,000. That's how resilient nature is, given a chance.