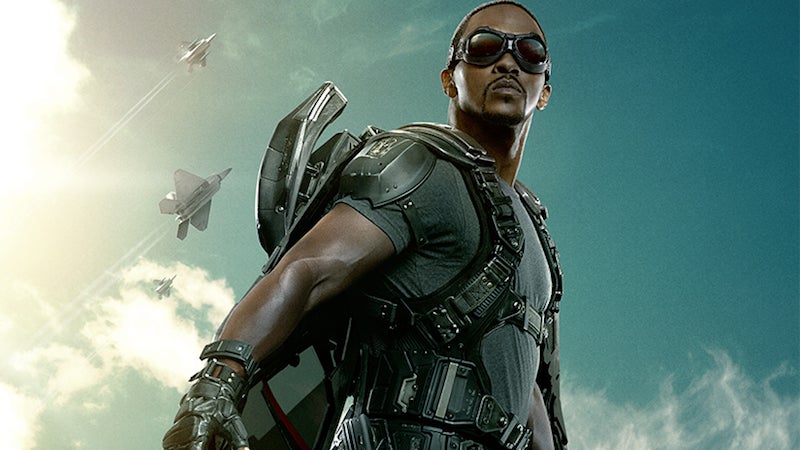 If you were wondering just how far Marvel's infamous secrecy goes — well, it extends to not telling actors what their cameos even mean until the movies actually come out. That's why Anthony Mackie learned that Falcon was becoming an Avenger in the movie theatre. IGN interviewed Mackie on the set of Civil War, only a few weeks after Age of Ultron came out, and Mackie had apparently still not found the cool he'd lost:

It's weird. You never know. They never send you the whole script. Like when they asked me to do [Age of Ultron], they sent me two scenes. There are two hours and seven minutes around those two scenes, but I never got to read it.

When we were at the premiere I was like "Cool." I'm with my son and he gets to see his daddy in two scenes in The Avengers. By the end of the movie I turn around and they're like "Avengers Assemble!" I'm like, "Holy shit! I'm an Avenger!!" So I turn around to everybody with me and they were like, "Dude! You're a fuckin' Avenger!" "This is fuckin' amazing." So, that's the story of my Marvel life.

As for how Marvel managed to keep that secret from one of the people in the scene where Captain American calls them "Avengers," well:

I had no idea. I flew in, Chris and Scarlett are up top and the rest of us are standing there. It was like "Cut. Anthony fly in. Action. Hm-hm-hm. Cut. Alright, thanks!" That was pretty much it. Six months later you go to a premiere and you shit yourself.

Everybody was like "Why are you so excited?" I'm like, "Arrhhhahhh... I just found out I'm an Avenger!" That's pretty much how it happened over and over. That's how Cap 2 happened, over and over and over again. So, I'm used to it. I'm interested to see what's going to happen with this movie.

Nothing better sums up the utterly ridiculous nature of these giant tentpoles, where secrecy reigns, as one of the actors in it saying, during filming, "I'm interested to see what's going to happen with this."