Amazon's voice-controlled assistant, Echo, is getting a few siblings you can bark your orders at. Meet the Echo Dot, which is designed to connect to whatever speakers you already happen to own, and the Amazon Tap, a portable version of the Echo.

You'll recall Echo, the table top speaker tube with a baked in intelligence engine called Alexa. Amazon slowly rolled it out as an experiment in late 2014, and has been gradually implementing more and more "skills" — tasks that the intelligence knows how to do. The product has been a qualified success and Amazon is ready to go big now.

The $US90 ($124) Echo Dot resembles a hockey puck.. It's available starting today — but there's a catch: It must be ordered through an Alexa endpoint by Amazon Prime members. So you can only get it if you have an Echo already, or use Amazon Fire TV, which also uses Alexa.

The Echo Dot's big selling point is that it allows consumers to plug into their own home speakers — it does have sound, but it's more muted, suitable for use as a smart bedside alarm clock. It can connect via Bluetooth or an audio cable, and was created in part because Amazon found that customers loved their speakers and wanted to use them in conjunction with the Alexa technology.

The Echo Dot is so compact that Amazon envisions/hopes that consumers will consider scattering them throughout their homes, using each Dot to control their lights, thermostat, and other smarthome features in every room (as well as playing music, re-ordering cat food, or whatever thing you can think to blurt out that Alexa can help facilitate). The Echo Dot uses the same "far field" voice recognition as the full-sized Echo, which means it can pick up commands from 20-25 feet away in noisy environments, and it also has the same coloured light ring that lets you know when it's responding. 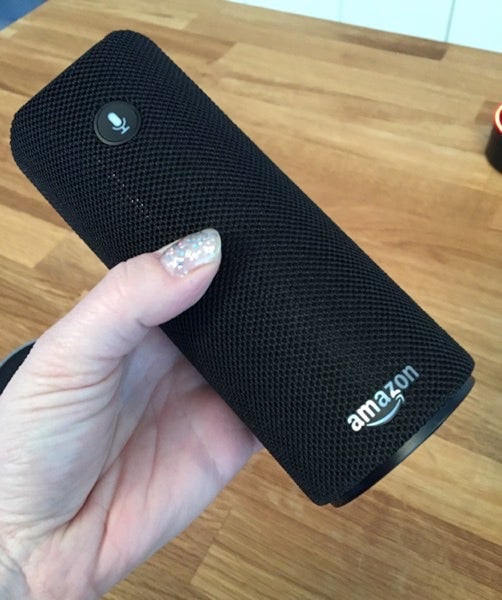 The Amazon Tap — so named because, like the remote-controlled Amazon Fire TV, it's "tap to use" rather than always on — is a portable version of the Echo. It's a Bluetooth and wi-fi speaker that offers booming sound in addition to all of the voice-controlled abilities that Alexa has; it also provides nine hours of play time, weighs one pound, and comes with a charging dock that fits neatly around its base. Like the Echo Dot, it goes on sale today and will start shipping March 31. It costs $US130.99 ($180) and you can just order it conventionally — no Alexa hook-up needed.

From the very beginning, Amazon Echo has been a surprisingly useful and interesting product. Still, it's always been something that's more "neat" than "necessary". These new products bode well for the future.