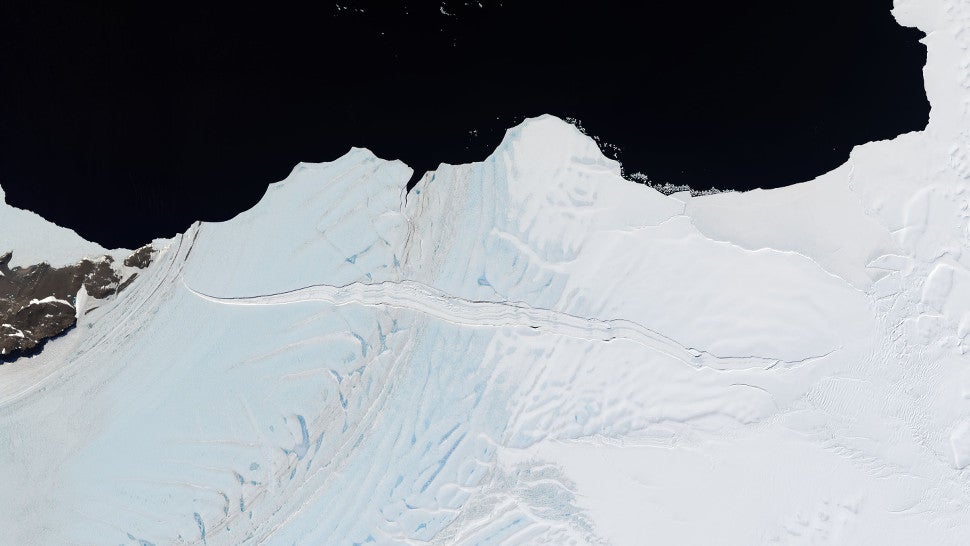 Two years ago, a crack appeared on an ice shelf along a stretch of Antarctic coast. The fissure has grown substantially since then, raising concerns that it will break free and form an iceberg over twice the size of Manhattan. Ice shelves are thick plates of coastline ice that float over the ocean. This particular ice shelf, called the Nansen ice shelf, measures about 50km long and 35km across. In 2013, geologists noticed that a crack had formed on the shelf running parallel to the coast. Satellite images taken late last year show the degree to which the crack has grown since that time. Scientists are now saying the entire structure could break free from the continent and float into Terra Nova Bay in the Southern Ocean. 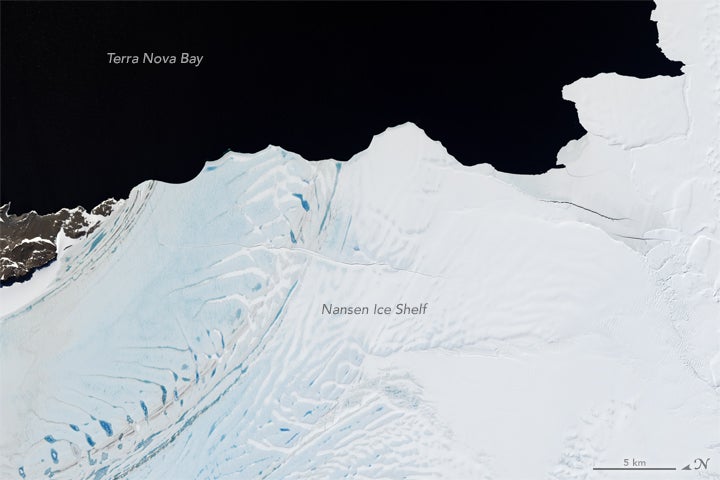 The crack as it appeared on 26 December 2013. Image: Jesse Allen, using Landsat data from the U.S. Geological Survey 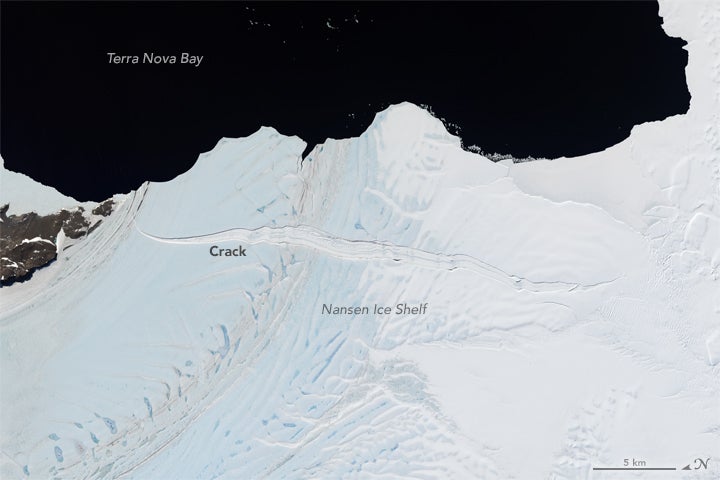 Back in December, geologists Christine Dow and Ryan Walker observed the site from helicopter. Dow captured this stunning image of the crack during the flight. 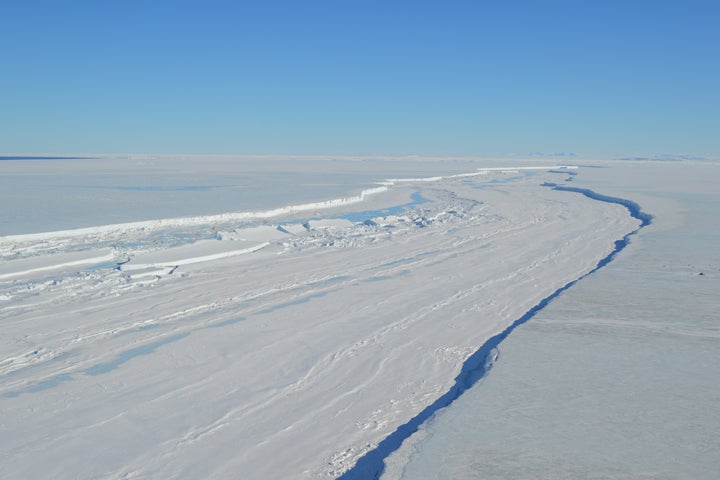 The crack as seen from a helicopter in December 2015. Image: Christine Dow/NASA

"There's a huge crack, miles long and sometimes over a hundred yards wide, which runs more or less parallel to the front of the ice shelf," noted Walker at his blog. "Over the winter, the sea surface freezes and traps small icebergs in the crack, producing a fascinatingly broken ices cape."

Satellite images taken just a few days ago show that the ice shelf is still attached to the coast. So with winter settling in, it's unlikely that the shelf will separate itself sometime soon. That said, strong winter winds can prevent the water beyond the shelf from freezing. As noted at NASA's Earth Observatory, it's "unclear whether the front will separate soon or hang on like a loose tooth".

Dow is hoping to return to the site next summer. As she told NASA, "I'm really interested to see whether this feature is occurring because of the topography around the ice shelf, or whether it was initially created by surface water flowing into a small ice surface crack. We're planning an intensive survey of this feature in the coming years and will hopefully get a handle on the causes."

This sort of thing happens from time to time along the Antarctic coast, and it's not necessarily related to climate change. Some of these events are cyclical, as ice grows, breaks free and then grows back again. Back in 2008, for example, the Wilkins ice shelf disintegrated into dozens of large glaciers. Years later, the remnants of the collapsed shelf could still be seen from space. Also in 2008, the Serson ice shelf along the northern coast of Canada's Ellesmere Island experienced a significant retreat — an event that has been linked to climate change.

Iceberg B-15T as it appeared in 2015. Image: Joshua Stevens, using Landsat data from the US Geological Survey/NASA

Finally, there's B-15T, the largest iceberg ever observed by geologists. Calved from Antarctica's Ross Ice Shelf in 2000, it measured 295km long and 37km wide. That's larger than the whole island of Jamaica, and about the size of Connecticut. Over the years it broke up into smaller pieces, including B-15A, which covered 6475 square kilometres of sea surface area. Most icebergs get caught up in the swirling Antarctic currents and fall apart, but this one stayed trapped in the cool coastal waters where it could remain for decades.