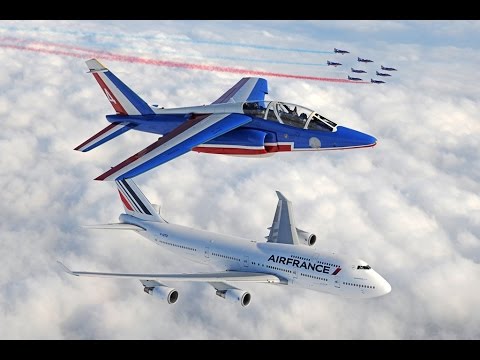 Video: The beautiful, venerable Boeing 747 is reaching the end of its lifespan at many airlines across the world. Take-up of the new-generation 747-8 has been slow, with many carriers choosing the smaller Boeing 777 alongside the behemoth Airbus A380. Air France has just retired the last of its once-68-strong fleet of 747s, and it flew the final jumbo jet around France with an escort from the country’s premier aerobatic team, the Patrouille de France.

The final flight occurred a few days ago, and saw the Queen of the Skies travel around France’s Camargue region, in formation with the French Acrobatic Patrol’s 12 Dassault/Dornier Alpha Jets. The video above is absolutely beautiful — you really get a sense of the 744’s beautiful lines, including that exclusive upper deck section. It’s a fitting send-off to one of the most iconic aircraft of the 20th century. (I strongly recommend you read 747: Creating The World’s First Jumbo Jet.)

Australia’s Qantas still has nine 747-400 ‘Longreach’ aircraft running to Singapore, Chile and the United States, and dutch carrier KLM has 22 of the newest 747s in service and expects them to keep operating until 2020. British Airways is currently the king of Queens, though, with 42 747-400s still operating around the globe. Bonus: here’s an entire playlist of material from Air France about the retiring its 747 fleet.