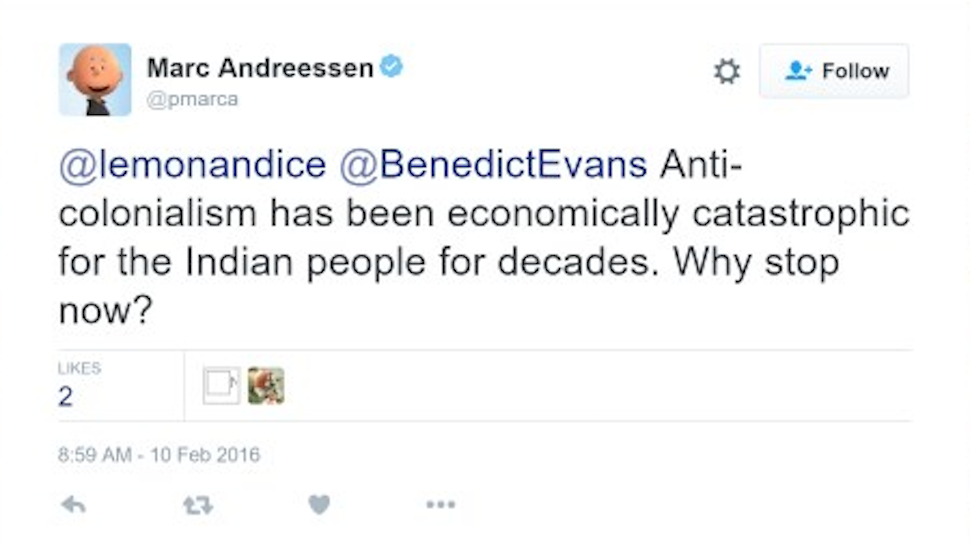 Facebook board director, venture capitalist and proof-of-concept egg/human hybrid Marc Andreessen has carried out a most impressive feat — a tweet so bad he simultaneously destroyed Facebook’s party line about its Free Basics program and implied that India would be better off still ruled by England.

Anti-colonialism has been economically catastrophic for the Indian people for decades. Why stop now?

The now-deleted tweet was a response to someone comparing Free Basics to colonialism. Free Basics is Facebook’s “free internet for everyone!” program, which was banned in India because it violates net neutrality. Andreessen, like Mark Zuckerberg, does not want India to ban Free Basics.

Unlike Zuckerberg, who keeps insisting that Free Basics is an altruistic act of good vibes via free knowledge, Andreessen seems to at least acknowledge that Facebook’s attempt to on-ramp poor people by offering a limited, Facebook-centric version of the internet is a fraught example of a Western superpower attempting to gain a stronghold for its own benefit in India, and why people would have a problem with that.

Andreessen attempted to walk back his statement by asserting that colonialism is bad.

And for the record, I am opposed to colonialism, in any country. https://t.co/3ommgZssMm

Rich people tweet stupid shit all the time. I doubt this will have a lasting impact on Andreessen’s reputation or ability to function in his career. “Arsehole tweets insult” is not what’s significant about this — it’s that we have proof of a high-ranking Facebook board member admitting that Free Basics isn’t just a dreamy lovefest.

Facebook is distancing itself from the situation, no surprise. “We strongly reject the sentiments expressed by Marc Andreessen last night regarding India,” a spokesperson told Gizmodo.

Earlier this morning, Andreessen tweetstormed about his bad tweet. It was painful:

2/To be clear, I am 100% opposed to colonialism, and 100% in favor of independence and freedom, in any country, including India.

4/I apologize for any offense my comment caused, and withdraw it in full and without reservation.

Mark Zuckerberg updated his Facebook to talk about how he loves India and does NOT like Andreessen’s statement. 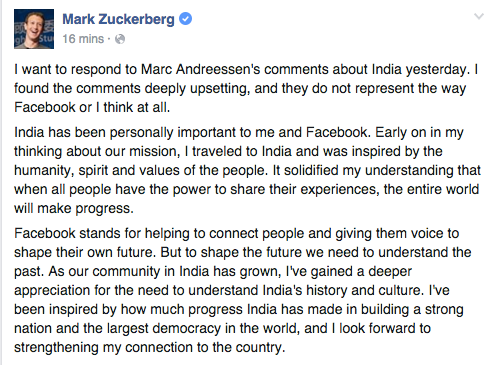