El Nino Hasn’t Vanished, But It Might Be More Powerful Than We Ever Imagined We were promised torrential rain, “conveyor belts” of storms, violent-alcoholic-on-malt-liquor wrath. Now much of California is broiling in 90-degree temperatures with no precipitation in sight. What gives? Don’t worry — El Niño didn’t bail. It might be even stronger than we thought.

For the past year or so, climatologists have been warning us about what to expect from El Niño: Warming ocean temperatures in the Pacific would fuel a punishing series of storms, hitting up and down the West Coast from December to April. And there have been at least one or two storms that delivered so far, including some wacky Christmas weather and a scary record-shattering blizzard.

Already, however, this El Niño is acting differently than the last big one in 1998, Stanford University climate scientist Daniel Swain tells the Los Angeles Times:

With the zone of warm water in the ocean particularly large and persistent, the movement of warm air above it travelled farther north than expected. That means the parade of storms zipping across the Pacific Ocean established a path over Northern California and even the Pacific Northwest — and bypassed Southern California, Swain said. That may be the reason why all but one storm have missed L.A. over the last month. “It may be because El Niño is so strong.”

Whoa. So all of the rain that was supposed to hit California actually headed far, far north. And California will keep baking under a high pressure system that could deliver up to 10 days of no precipitation. 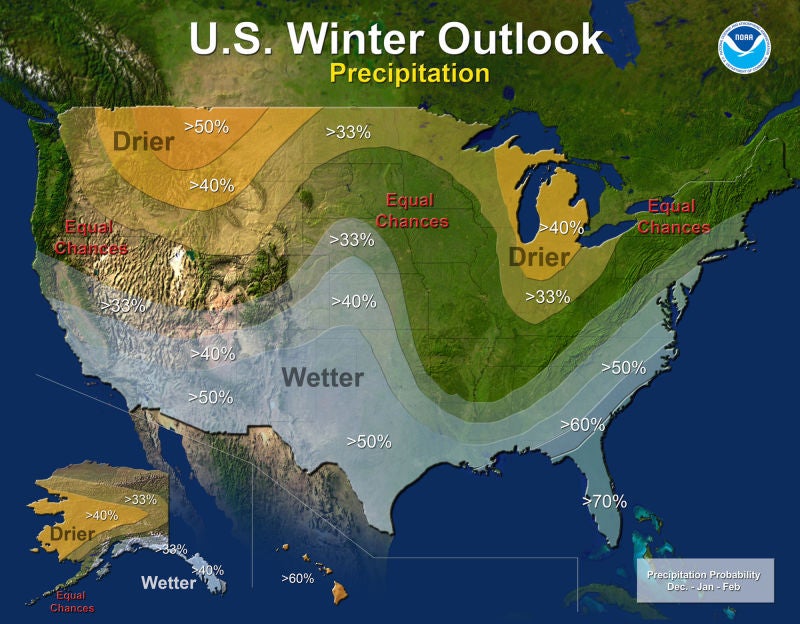 The original NOAA prediction for El Niño season. In reality, the wet weather has headed much higher north.

But hey! If this is indeed what’s happening — that El Niño is shredding so much gnar that it’s ollying off the Canadian border — that’s actually kind of good, from a drought perspective. Precipitation heading north has a much better opportunity to fall as snow in the Sierras, Cascades, and Rockies, replenishing the snowpack that provides long-term drought protection. Remember the Pacific Northwest, Canada, and Alaska also had horrifically dry, wildfire-filled summers — so it’s not like the wet weather isn’t very welcome there as well.

In fact we’ve already seen some promising stats when it comes to El Niño storms and the drought. Reservoirs are filling back up and snowpack is at a a statewide average of 103 per cent for this time of year. Some of us have seen enough precipitation to ratchet the country up a few notches on the drought monitor meter — we’re back to levels that we haven’t seen in six years. But a third of California is still suffering from exceptional drought, including the same region that’s seeing the incredibly hot and dry weather this week. Rain is still very much needed. 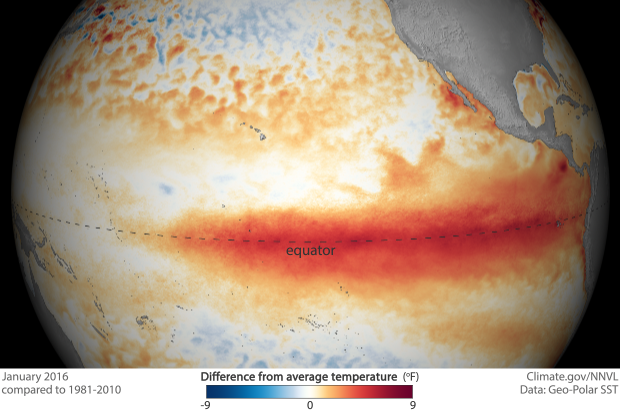 Those ocean temps are still going strong, according to the latest El Niño update. The next update is February 11.

Of course there’s also the possibility that El Niño is just running much, much later than we thought and the entire state will still get slammed as planned. But some forecasters — including ones at NASA — believe we’ve already seen peak El Niño, and that no more sloppy wet climate kisses are headed our way. The next official update is February 11.

So, keep your shorts out. It might be another long summer. [LAT]