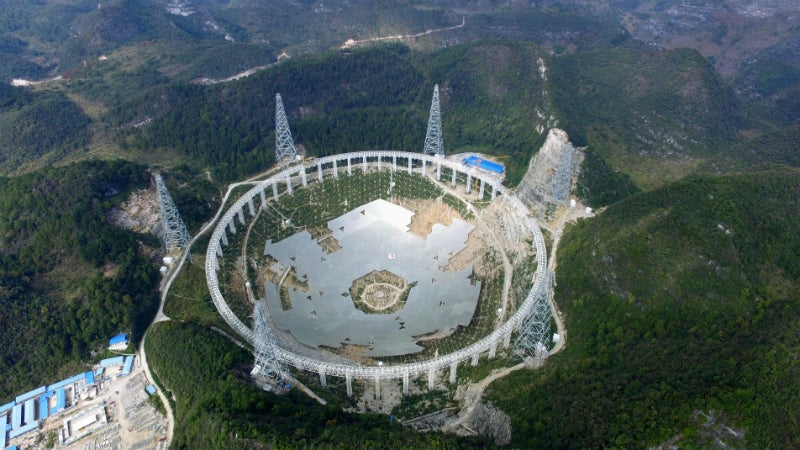 China is building the biggest radio telescope on Earth. And the country is displacing over 9000 people to do it. As headlines like "China uproots 9,000 people for huge telescope in search for aliens" suggest, people are justifiably upset about it. It's especially egregious, considering that these folks are being paid a laughable pittance to move: 12,000 yuan. That's barely $2580, and less than half the average annual salary in China.

Upsetting to be sure — but would people react differently if it were a highway or a dam? This telescope is a different breed of public works progress, on a different scale. It won't necessarily fix China's notorious traffic problems or keep the lights on in Shanghai. But this telescope could help all of mankind to see the universe in a whole new way.

The 500m-wide telescope is called FAST (Five-hundred-metre Aperture Spherical Radio Telescope), and it's almost double the size as the next biggest radio telescope, a similarly shaped contraption in Puerto Rico. Its 460,000 reflective mirrors will reflect radio signals emitted by the universe onto a 30-ton antenna, which could help us unlock all kinds of galactic secrets, including whether or not we're truly alone in the universe. The $US184 million project is supposed to wrap up in September after five years of construction.

But to make that happen, over 9000 people will trade their homes for a small amount of money. China is actually nefarious for development-induced displacement. Back in 2010, a staggering 300,000 residents were moved to clear the way for the Three Gorges Dam. That seems like a paltry number of people compared the million-plus Chinese that were moved against their will for construction for the 2008 Beijing Olympics. In fact, since the '70s, over 40 million Chinese have been displaced due to various public works projects or infrastructure initiatives.

But this just isn't any public works project. It's one of the most ambitious space research telescope projects in history. The telescope is a lot more than just some hunt for aliens. Last year, a Chinese astronomer told the South China Morning Post that the telescope is built to capture barely audible radio transmissions that are more than 1000 lightyears away. If there's intelligent life out there, astronomer Shi Zhicheng said in July, then we could hear messages they left behind using FAST.

So FAST can help us study space at new, mind-blowing distances, and that has many benefits beyond the off chance that we discover life on other planets. As researchers from the Chinese Academy of Sciences reported when the telescope was still in the planning stages:

As the most sensitive single dish radio telescope, FAST would be able to discover more mega-masers and measure the radial velocities of masers with higher precision. This may yield more delicate dynamics of their maser spots. FAST will increase the precision of time of arrival (ToA) measurements for pulsars. This will help in detecting the stochastic gravitational wave background and in establishing an independent timing standard based on the long-term stability of the rotations of a group of millisecond pulsars. FAST might also work as a very powerful ground station for the future space missions

And don't forget that NASA recently discovered the most Earth-like planet ever found and detected gravitational waves for the first time. More powerful and accurate telescopes will undoubtedly open the door to new discoveries.

Does the Chinese government need to treat the people displaced by this massive project better? Absolutely. But let's also bear in mind the fact that China's efforts in developing its space technology won't just help China learn more about the universe. It will help everyone.