If you're looking for an elegant, unique, and entertaining desktop accessory to enhance your desk at the office — something a bit classier than a drinking bird, and less familiar than a Newton's Cradle — the PhiTOP could be the toy you're looking for.

Its creator, Kenneth Brecher, prefers to think of it as a "philosophical toy" that "does for angular momentum what Newton's Cradle does for linear momentum." Brecher is a professor of physics and astronomy with a longstanding interest in the science of spinning things, whether they be the electrons and protons of atomic nuclei, or planets and stars in the universe — or spinning tops. When his PhiTOP spins horizontally, it rises to a standing position before settling back down 2-3 minutes later — surprisingly counter-intuitive behaviour, unless one has taken a few physics classes.

Earlier this year, Brecher began experimenting with various egg-shaped objects to see which ones were the most interesting from a spinning perspective. "By interesting I mean, when spun from a horizontal position, they would rapidly rise, stand erect, spin at a different rate and then gracefully settle down to a static horizontal position," he wrote in his Kickstarter description. "I found that objects with the ratio greater than about 2 to 1 will not stand up and spin stably; those with the ratio less than about 1.4 display erratic and less visually pleasing and interesting behaviour." 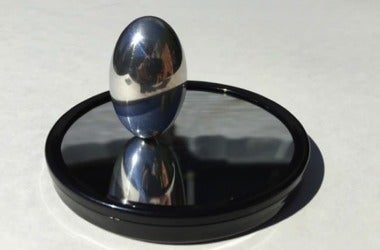 In the end, he settled on so-called prolate ellipsoids, specifically those with a length-to-width ratio of about 1.6 — which happens to be roughly the same as the Golden Ratio (aka the "divine proportion", designated by the Greek letter phi): 1.618. That's why he called his resulting spinning toy a PhiTOP.

Brecher raised over $US11,000 on Kickstarter to fund his PhiTOP venture, and shipped the first batch of first-edition aluminium and brass toys to backers just in time for Christmas. If you weren't among one of the lucky recipients, you can always place an order for the second round of PhiTOP toys, slated January and February.

In the meantime, savour this short video on the physics of spinning tops Brecher made last year to accompany a presentation he gave at a South Korean conference on art and mathematics:

[Via Lost at E Minor]