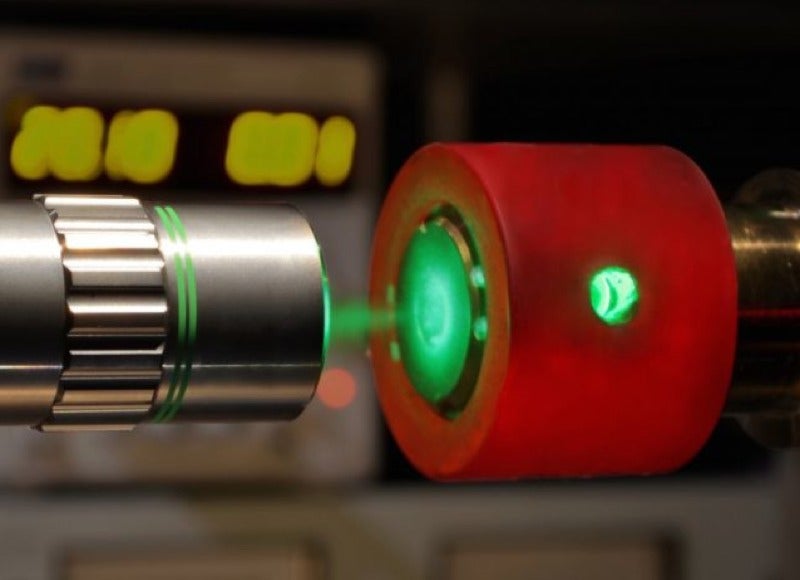 Hydrogen, that most simple of elements, is a gas — at least at the typical temperatures and pressures found here on Earth. But many scientists believe it it could exist in liquid metal form in the cores of gas giant planets like Jupiter, and physicists have been hunting for a solid metallic phase for the last 80 years.


Now a team of Scottish physicists fro the University of Edinburgh think they may have spotted a new phase that may be the precursor to a true solid phase of metallic hydrogen. They described their findings in a paper published this week in the journal Nature.

Any substance has a specific moment when the pressure or temperature is just right to cause it to shift from one state, or phase, to another. Water is the most common example: lower the temperature sufficiently and it will turn into ice; raise the temperature to a boil and it will evaporate into steam.

That critical point can vary even for the same substance. At sea level, water boils at 212-degrees F (100-degrees C) and freezes at 32-degrees F (0-degrees C). But water will boil at a much lower temperature in Denver, for instance, because of the lower atmospheric pressure. And back in 2006, physicists at Sandia National Laboratories ran computer simulations showing that a conductive phase of “metallic water” would form at temperatures of 4000-degrees Kelvin and a pressure of 100 gigapascals. (For scale, one gigapascal is equivalent to about 10,000 atmospheres of pressure.)

James Dewar, inventor of the vacuum flask, figured out how to get hydrogen to turn into a liquid and a solid in 1989 and 1899, respectively, using a regenerative cooling machine he built at the Royal Institution. The birth of quantum mechanics added a new twist. In 1935, Eugene Wigner and Hillard Bell Huntington famously predicted that hydrogen could transition to a solid conductive metal at sufficiently high pressures. Physicists have been chasing after this elusive beast ever since.

It looked like they were closing in on their prey in 1996, when physicists at Lawrence Livermore National Laboratory announced they’d achieved a fluid state of metallic hydrogen in a series of shock compression experiments. It was only around for about 100 nanoseconds, but that was long enough to confirm its existence. But this fluid phase of metallic hydrogen is still very different from the long-sought solid phase, according to William Nellis, who led those earlier experiments.

This latest work isn’t a true solid phase of metallic hydrogen, either, but it’s one more promising step forward. The Edinburgh physicists used two diamonds to crush hydrogen and its heavier isotope, deuterium, achieving pressures of more than 380 gigapascals — the highest yet reported. They used a technique called Raman spectroscopy to study how the molecular bonds behaved under such high pressures. And they found that this is when the molecules started to break apart into single atoms, and the electrons started to act more like those found in a metal.

They have dubbed it “Phase V.” There’s still some evidence of bonds, so this isn’t the long-sought solid form. Yet. But the Edinburgh team speculates this could mark the onset of such a solid metallic phase of hydrogen. It might just take a wee bit more pressure. Or it might take a lot more pressure. Only further experiments will tell.

Apart from the coolness factor, a truly solid phase of metallic hydrogen would be useful for all kinds of applications — assuming it could be “quenched to ambient pressure and temperature,” Nellis told Gizmodo via email. That’s a pretty tall order. The technical challenges are formidable, but if physicists ever succeeded, we could have a room-temperature superconductor on our hands. (Most superconducting materials, even the so-called high-temperaure superconductors, require complicated cooling systems, since they only become superconducting at temperatures on par with liquid helium and liquid nitrogen.)

It would also be a fantastic environmentally clean fuel source (assuming any additives are equally clean), because it has such a high density of stored energy. A low, gradual release of that stored energy would be ideal for cars, trains, and aeroplanes. Speeding up the energy release would make solid metallic hydrogen an excellent propellant, to replace the liquid H2/O2 fuel now used to launch rockets into space. You could even use it as an explosive if you could manage to get all the stored energy to release really fast. Plus it has potential as a fuel for inertial confinement fusion reactors.

It’s possible physicists will never find the truly solid form of metallic hydrogen they seek — and even if the Edinburg scientists do find it in a diamond anvil cell in the future, it won’t bear much resemblance to that original 1935 prediction. Nellis points out that Wigner and Huntington weren’t at all sure their predicted phase of metallic hydrogen would form at all. “It has never been observed in any solid phase of hydrogen,” he said.