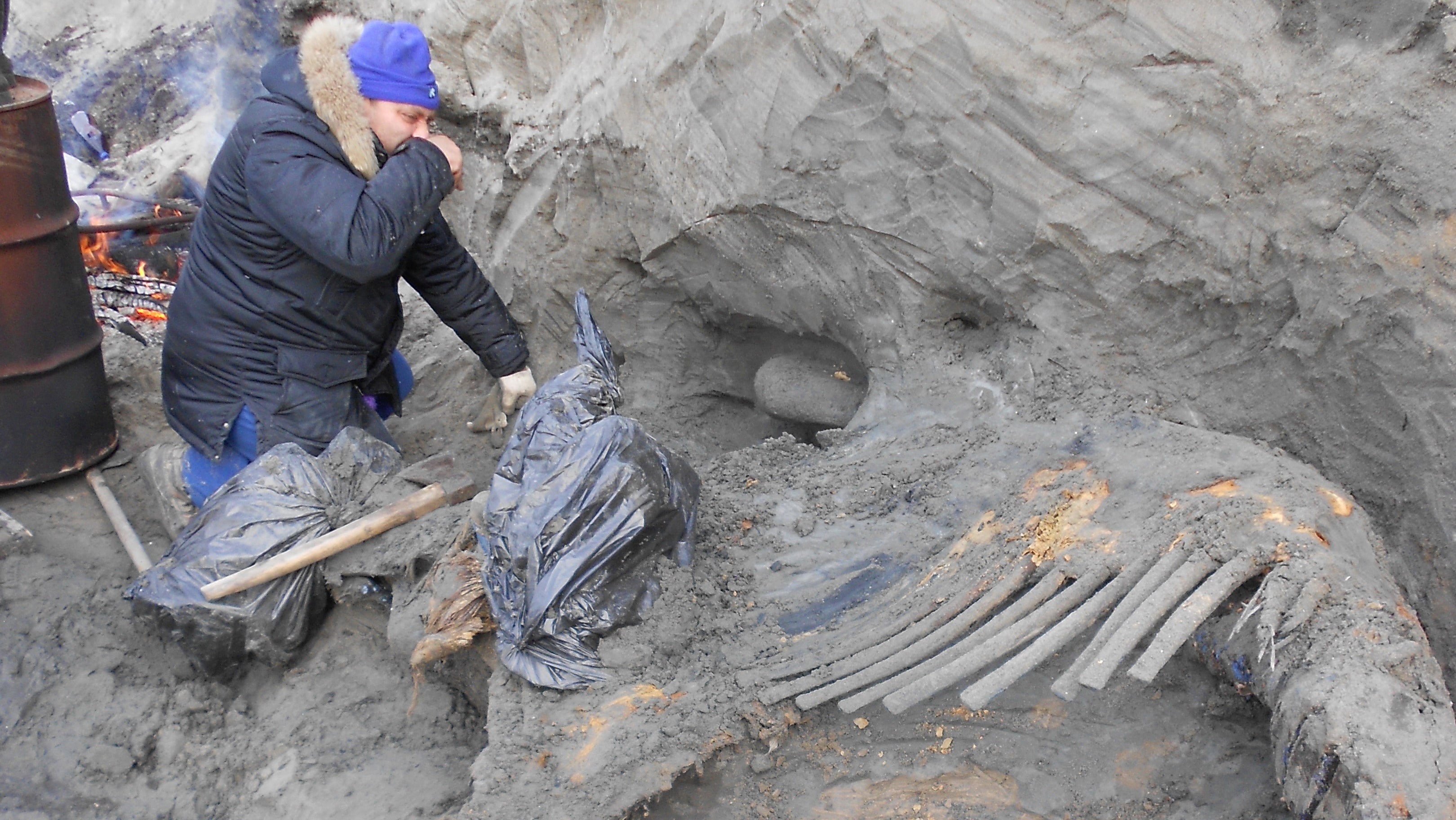 The carcass was remarkably well preserved, but something was clearly wrong. A rounded hole through the interior jugal. Deep incisions along the ribs. Dents in the left scapula. A broken mandible.

This 45,000 year-old mammoth's life ended violently at the hands of hunters. That wouldn't be surprising — it's well known that Pleistocene humans were expert mammoth killers — but for the location. It was excavated from a permafrost embankment at Yenisei bay, a remote spot in central Siberia where a massive river empties into the Arctic Ocean.

That makes this brutalized mammoth the oldest evidence for human expansion into the high Arctic by a wide margin. Its discovery, published today in Science, might push back the timeline for when humans entered the northernmost reaches of the world — including the first entries into North America.

"We [now] know that the eastern Siberia up to its Arctic limits was populated starting at roughly 50,000 years ago," said Vladimir Pitulko, an archaeologist at the Russian Academy of Sciences and lead author on the study. "This makes our window into the remote part [of the planet] open wider."

Bones of the ancient beast were first discovered jutting out of a river bank in 2012. The Russian Academy of Sciences deployed an excavation team to study it. That team, led by Pitulko and Alexei Bystrov, soon realised they were looking at something unusual.

"When the frozen block with the carcass arrived in St. Petersburg, I went to the Zoological Museum to look at bones and a tusk," Pitulko said. "The second bone which I picked up (that was the fifth left rib) had a clear pattern of human impact. Then other injuries were discovered."

The injuries, Pitulko said, were without a doubt caused by human hunters. And when the archaeologists returned to the scene to collect soil samples for radiocarbon dating, things got really interesting.

Radiocarbon analysis revealed the mammoth was killed 45,000 years ago — in a part of the world where humans weren't supposed to be living at that time. The closest other evidence of modern humans is from dig sites located over 1,609km south and ten thousand years later.

The discovery challenges our current understanding of early human history. Archaeologists believe that the ability to survive in far northern climates was related to technological advancements, including the widespread adoption of ivory hunting spears. If those advances had already occurred 45,000 years ago, then people could conceivably have crossed the Bering Land Straight into North America around that time. By comparison, our current oldest evidence for humans in North America only dates back about 15,000 years.

But of course, just because people could have migrated to North America doesn't mean they did. But now that the possibility is on the table, archaeologists may start looking harder. "These findings are bringing more questions than answers," Pitulko said. But eventually, he predicts, "they are going to change the story of our spread across the planet."

Top: An archaeologist excavating the mammoth carcass described in the study, via Pitulko et al. 2016