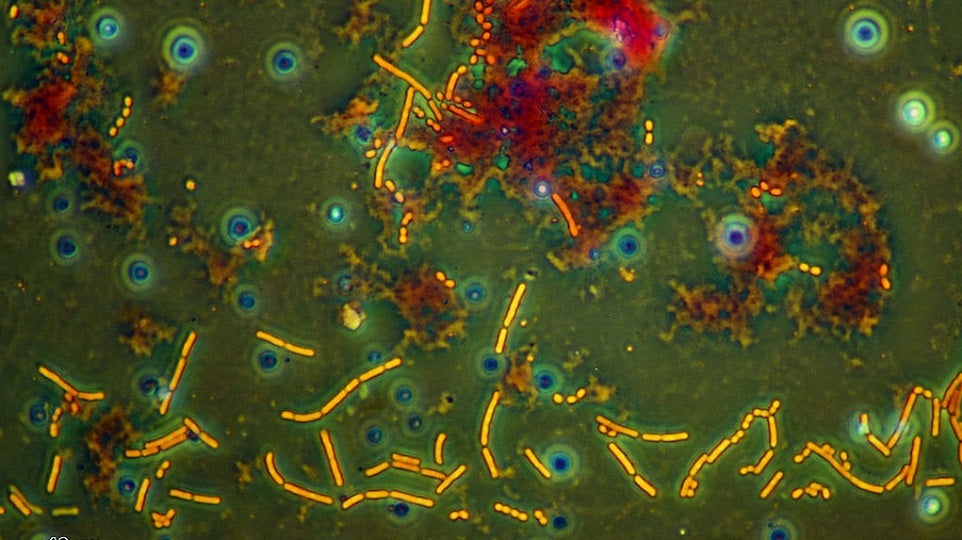 You've probably suspected that your household drinking water — which came from a reservoir, through underground pipes, to your filthy kitchen sink — wasn't sterile. Now scientists are studying exactly what's in that water. DNA sequencing is letting scientists test out things that they otherwise could not — like the contents of your drinking water. Researchers from the University of Sweden found that not only are there about 80 thousand bacteria per millilitre of water, but the bacteria are forming biofilms (know to laypeople as slime) on the inside of water pipes. The biofilms are huge communities of bacteria that stick together to increase their odds of survival — which in this case means not getting swept away.

These bacteria do not harm your body any more than the millions of other bacteria you are exposed to every day of your life. Some are even beneficial. A survey of the identifiable bacteria in water found that about 80 per cent of the bacteria is Proteobacteria, a huge family that includes both salmonella and the bacteria that causes the plague. But the family members found in the water supply are actually from the Sphingomonadaceae branch of the Proteobacteria family. These bacteria munch on aromatic compounds, and are a natural means of odor control. They're probably making your water less noxious as we speak.

But deodorising water is small potatoes. The scientists are next planning to study exactly how the bacterial communities in the water supply change over time, and what factors cause them to change. Then they will see if they can introduce nutrients into the water supply that will encourage the bacteria that we want. People are paying for bacteria in little pots of thickened cow juice (otherwise known as yogurt) in order to improve their insides. Maybe some day, we'll get probiotics every time we turn on the tap.