This Mesmerising Simulation Shows How Americans Spend A Typical Day 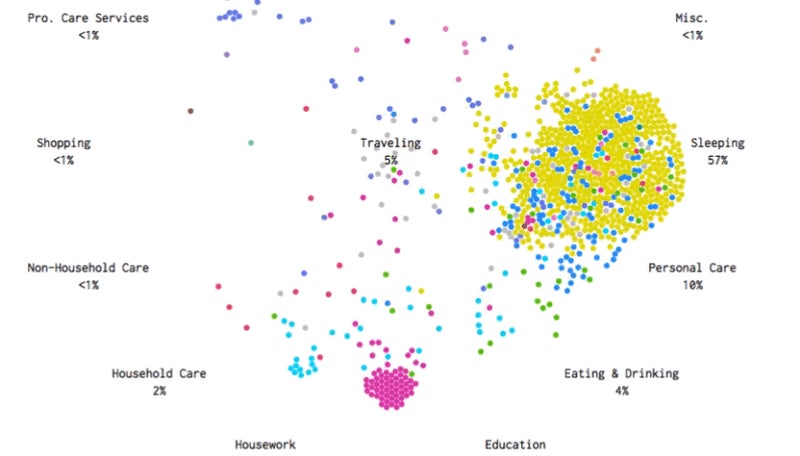 When it comes to a "typical" day, most of us are too wrapped up in our own routines to think about what others might be doing. Thankfully, this fascinating visualisation by statistician Nathan Yau shows exactly how a country can run — right down to the minute. This simulation can be found at FlowingData, and it captures the representative ebbs and flows of a thousand people's average day. It's based on data from the 2014 American Time Use Survey, which asked Americans what they typically did during a 24-hour period.

"More specifically, I tabulated transition probabilities for one activity to the other, such as from work to travelling, for every minute of the day," noted Yau. "That provided 1,440 transition matrices, which let me model a day as a time-varying Markov chain. The simulations...come from this model, and it's kind of mesmerising."

The simulation, which can be run at slow, medium, or fast speed, starts at 4:00am when most people are asleep, and it gradually builds from there. Daily activities are clumped into 16 groups that are arranged in a clock-like format. As activities change, the dots — which represent a proportionate segment of the population — migrate to different nodes.

"You see people head to work, run errands, do housework, take care of the kids, commute, relax, and eat at almost designated times during the day. I stared at these dots longer than I care to admit," writes Yau.

Here are some screen caps. 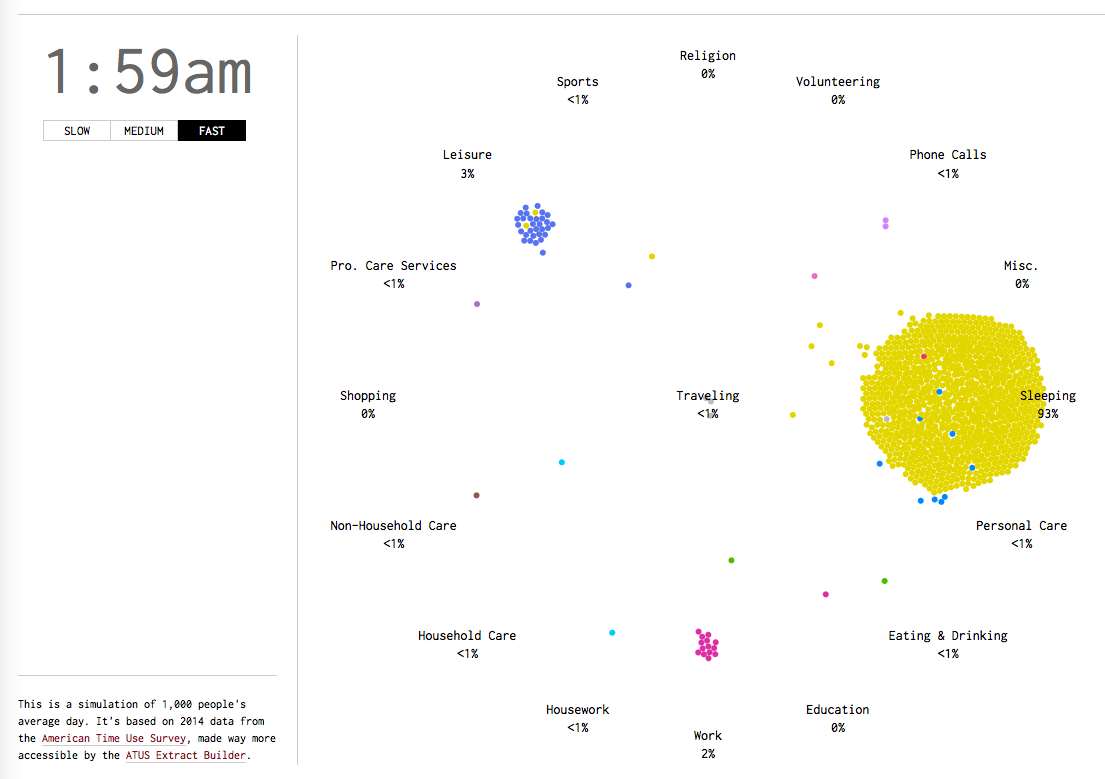 At 2:00 in the morning, the vast majority are asleep, though 2 per cent have to work, while 3 per cent find time for leisure. 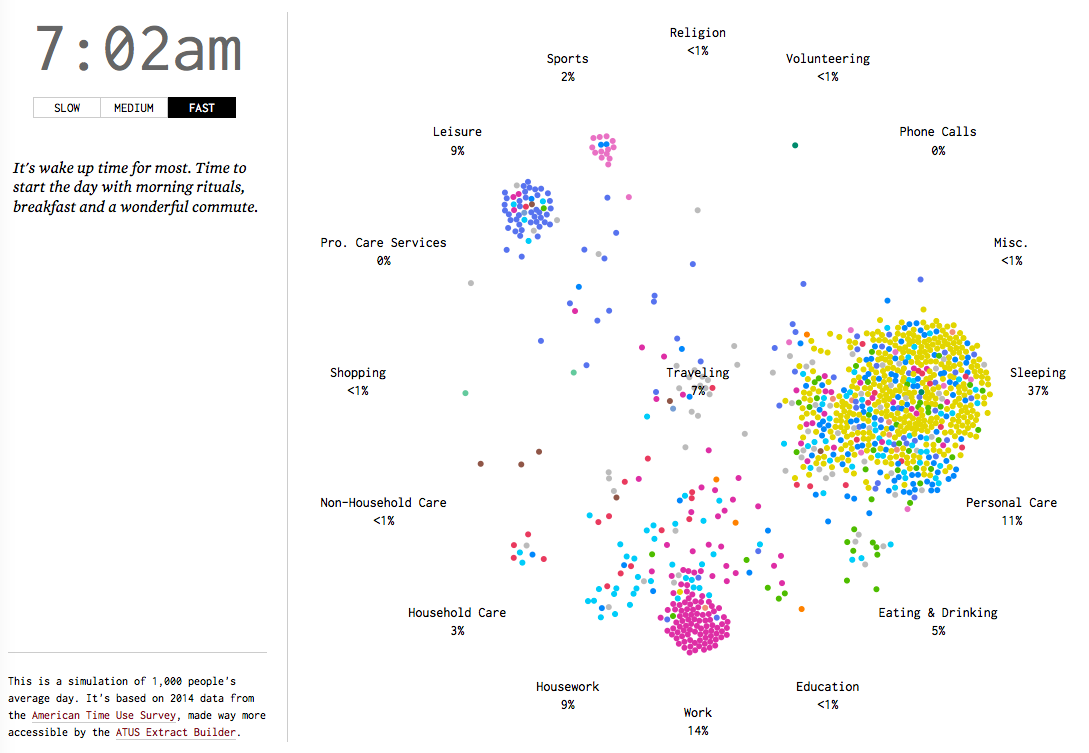 The transition to 7:00am is dramatic, as a sizable portion of people wake up and assume their daily responsibilities. By this time, around 14 percent are already working. 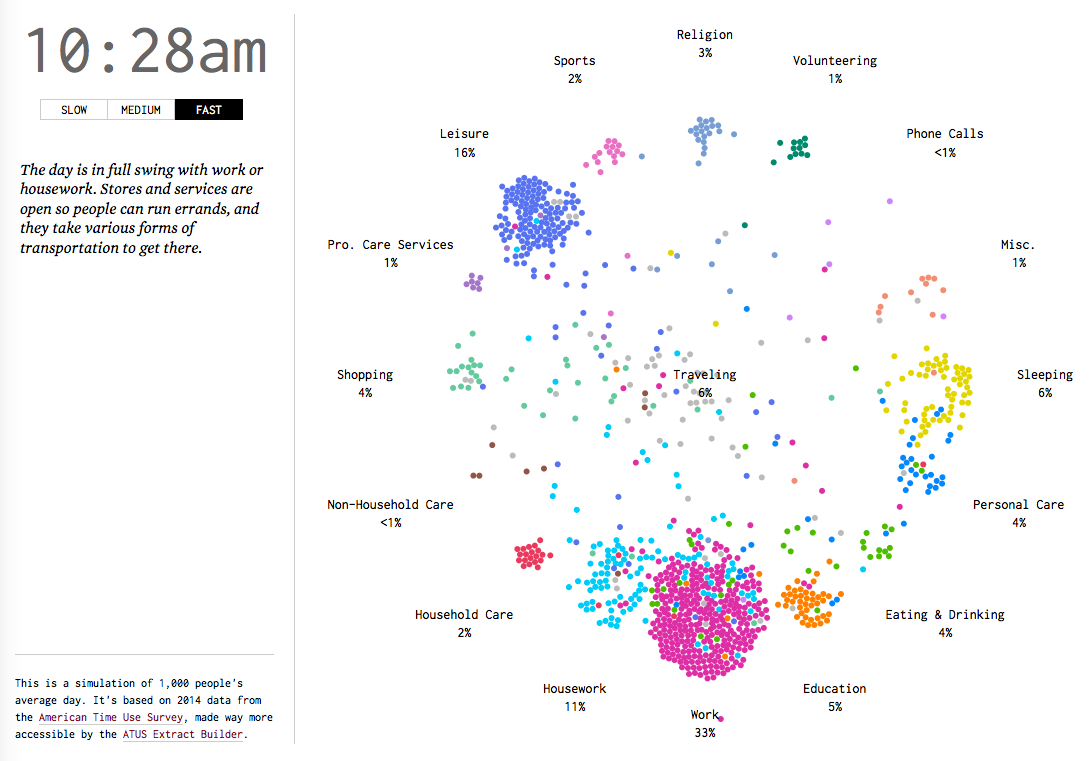 By 10:30am, many people are at work, school or doing leisure activities. 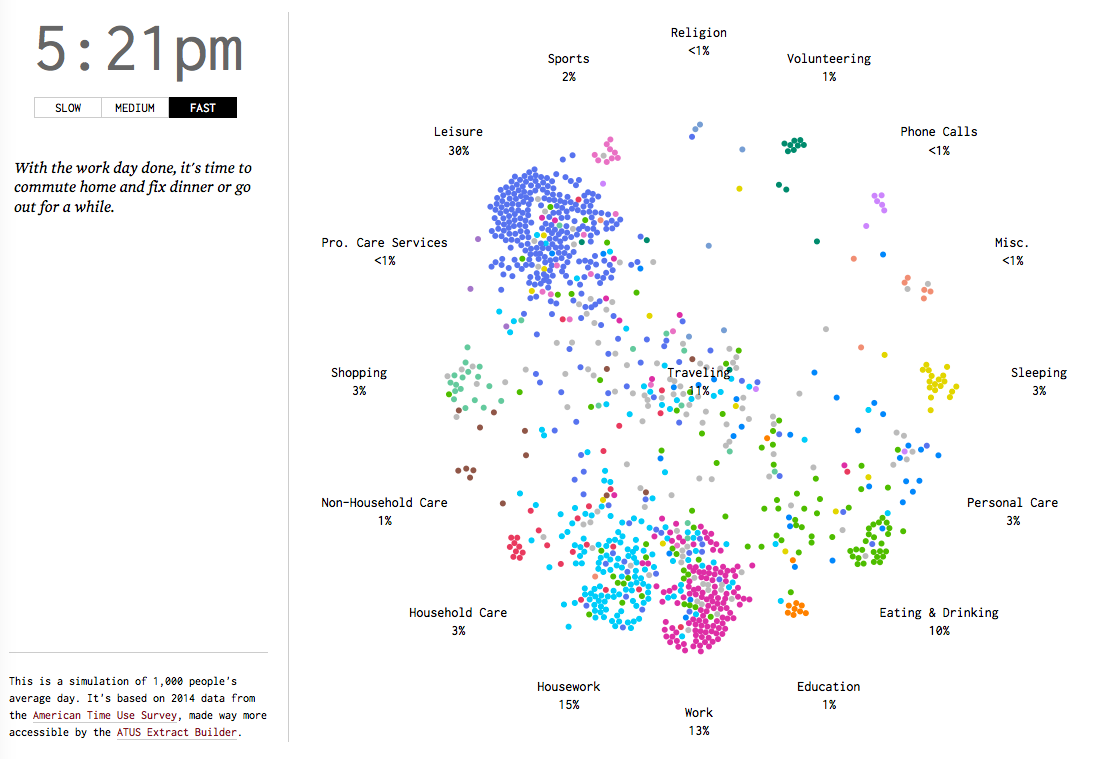 The evening commute is another major transitionary time. 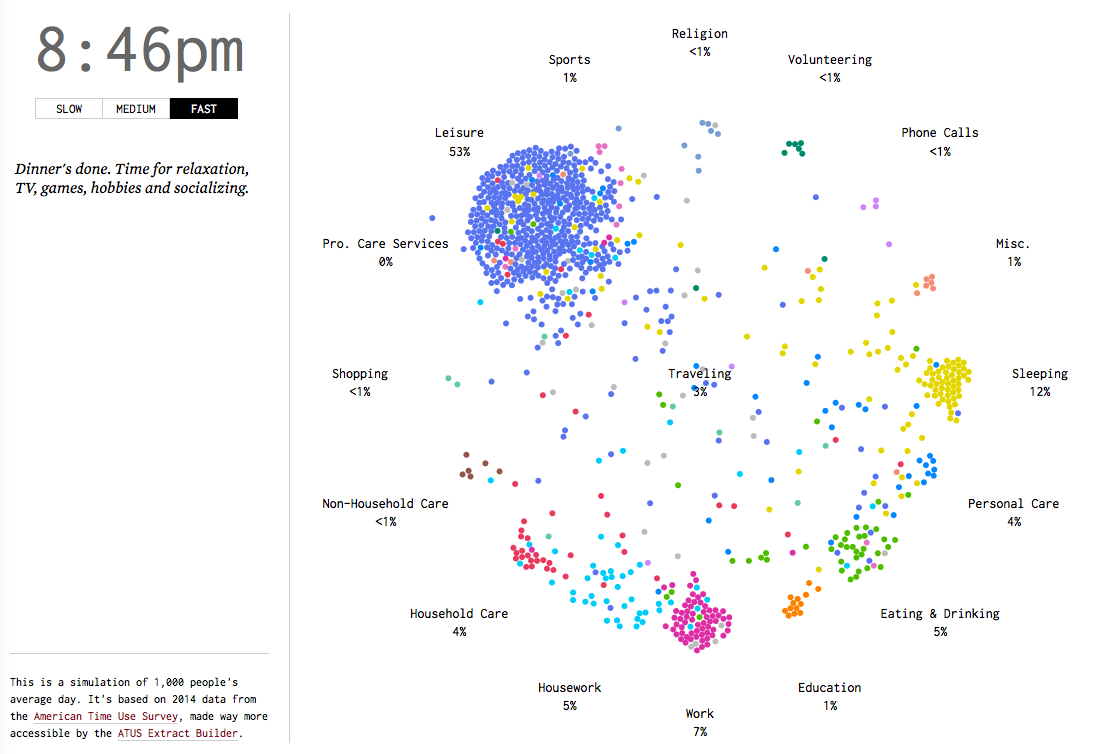 As the day winds down, people flock to leisure.

Because it's hard (if not impossible) to follow a single dot, Yau also created "static" versions to keep track of where people were going. To do so, Yau drew lines to show the paths, and assigned colours to represent paths ending in a particular activity. Here's one example, taken at 5:00pm. 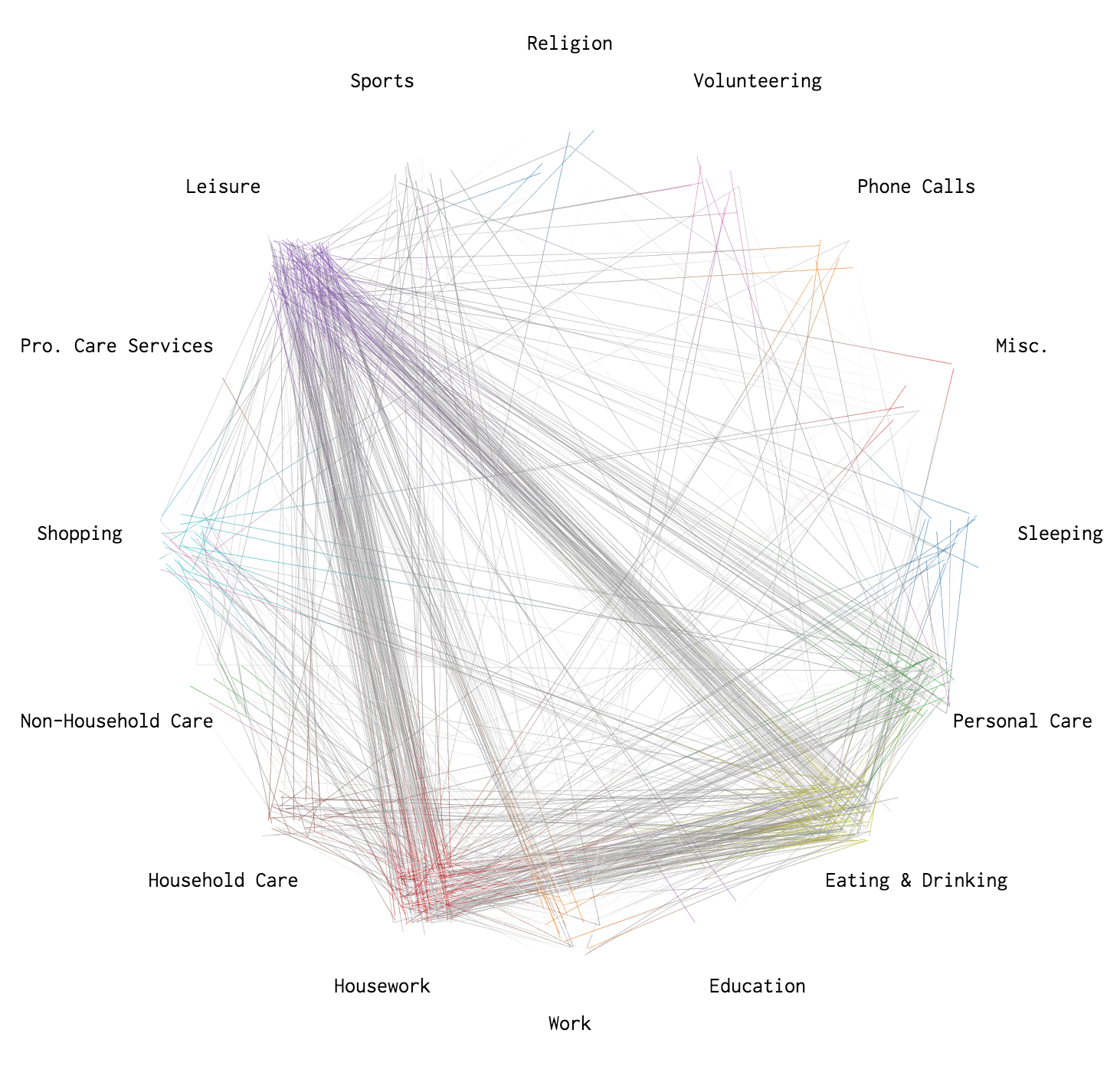