This Exercise Bike Turns Cycling Into A VR Racing Game 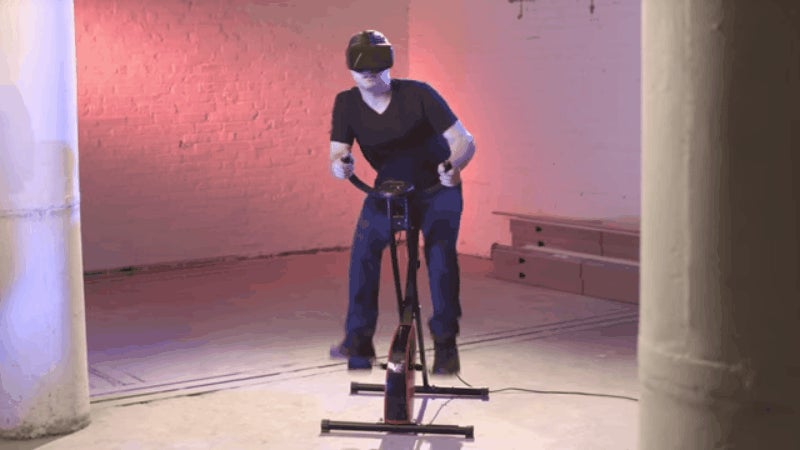 Working out can be a drag, especially if your only means of entertainment is an awful juicer informercial on five of the 10 gym TVs. But thanks to virtual reality, you can soon exercise your way through a video game — and starting today, you can preorder a VR-ready bike that lets you do exactly that.

VirZoom is a VR startup in Cambridge, Massachusetts that sticks you in an immersive video game as you sweat bullets pedalling on a stationary bike. The ends of the handlebar resemble game controllers, and it's compatible with Oculus Rift, PlayStation VR, and HTC Vive. The faster you pedal, the faster you go in the VR game, dropping calories the whole time.

"The VirZOOM team has created a unique VR game platform that turns the stationary exercise bike experience inside out," said VirZoom cofounder and CTO Eric Malafeew in a press release. "Rather than distracting you with a 2D screen experience, we harness the intense immersive power of VR to make you move so you get a workout without feeling like you're working out at all."

For now, the games include a high-speed racing game, a lasso-flinging cowboy stampede, and one that lets you control Pegasus as you gallop and glide over rolling hills. The company says that it's safer than other kinds of VR, since you're staying in the same place the whole time and not getting super disoriented and tripping over table.

The company's calling the bike a "VR controller," and it's on sale for $US249.95 ($348), going at a discounted $US199.95 ($278) for all preorders. For an extra $US10 ($14) a month, you get access to a subscription service that keeps track of distance travelled and calories burned, and even opens up multiplayer capability and access to third-party games to be added in the future.